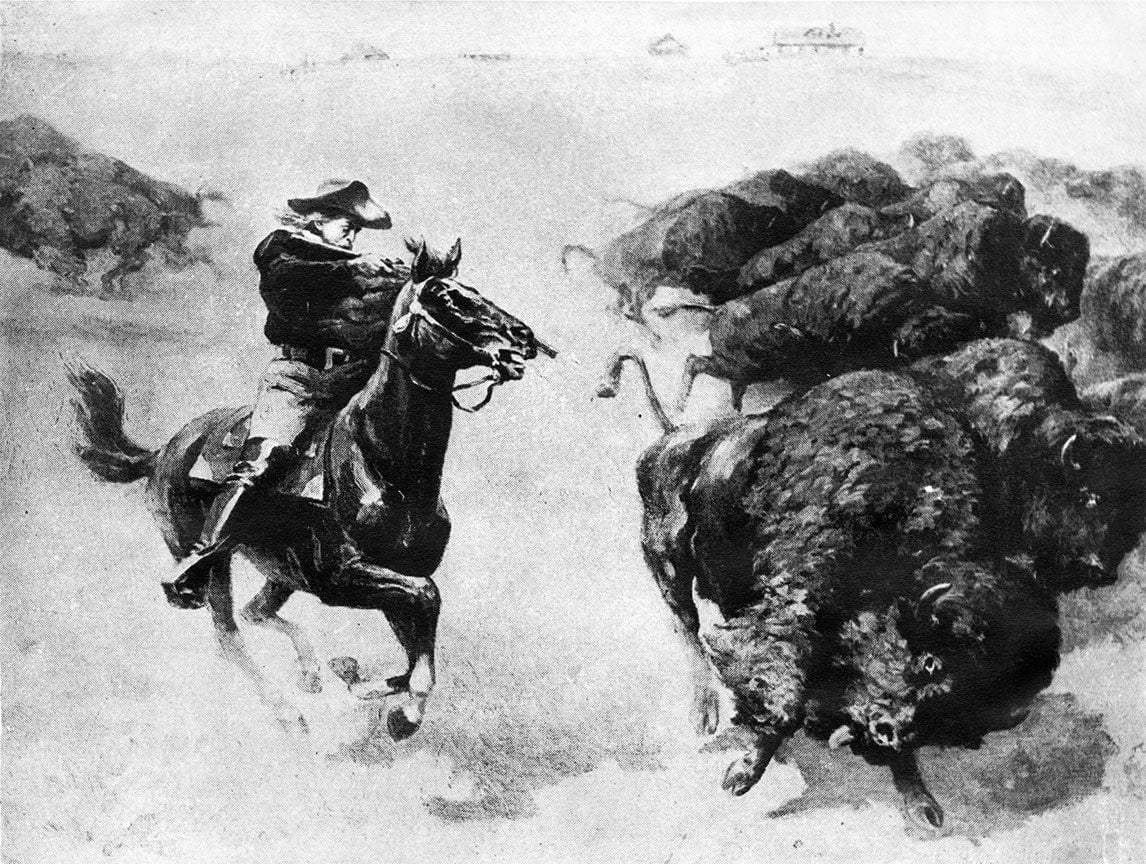 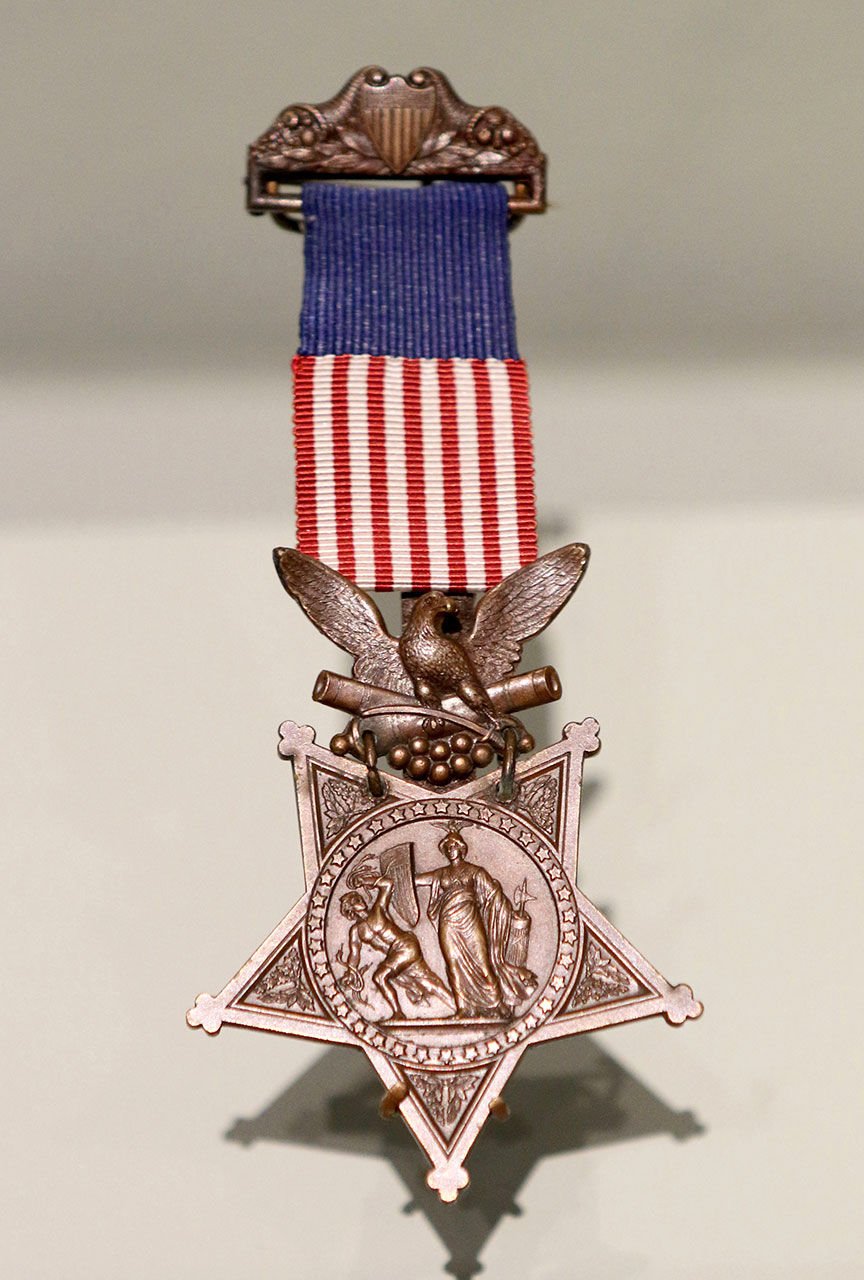 Buffalo Bill Cody was awarded a Congressional Medal of Honor in 1872.

Buffalo Bill Cody was awarded a Congressional Medal of Honor in 1872.

(Editor’s note: This this is the fourth in a series telling the story of Buffalo Bill’s life throughout the year.)

William F. Cody was awarded the Congressional Medal of Honor for gallantry as a U.S. Army scout during the Indian Wars in 1872.

The nation’s highest military honor, with its distinctive cloth-attachment of red, white and blue stripes, can be viewed inside a glass case at the Buffalo Bill Center of the West in Cody.

“That’s the one that was presented to him,” said Paul Fees of Cody, curator of the Center’s Buffalo Bill Museum when the medal was acquired in 1983.

However, the medal can also be viewed inside a glass case at the Buffalo Bill Museum & Grave in Golden, Colo., donated by Cody’s foster son Johnny Baker in 1921.

“That’s the one we have in our collection,” said Steve Friesen, director of the Colorado museum.

Two of the same?

Typical of Buffalo Bill, where myth, legend and reality routinely collide over such questions as where his body was actually buried after his Jan. 10, 1917, death, and whether or not he really rode for the Pony Express,  the story of his Congressional Medal of Honor travels a crooked road as well.

Buffalo Bill lived an extraordinary life from 1846 to 1917. He became the most famous person in the world and was the most photographed.

“He was the real deal,” said Jeremy Johnston, curator of the Center’s Buffalo Bill Museum.

People wrote fiction portrayed as truth about Cody in dime novels and he virtually invented the American West for posterity through his Wild West exhibitions.

In between his Pony Express adventure and his emergence on the world stage, Cody fought in the Civil War on the Union side, was part of the 7th Kansas Cavalry, became an Army scout in 1868, fought in 16 battles in the Plains Indian Wars and became Buffalo Bill.

The awarding of the Medal of Honor triggered a century-plus saga.

In an against-the-odds, sounds-impossible culmination, investigation indicates both medals are genuine.

When it comes to Buffalo Bill, examiners of his life recognize the unlikely is customary and nothing is inconceivable.

If William F. Cody’s prime were the 21st century, he would probably be the beer pitch man designated as “The Most Interesting Man In The World.”

Cody left Pony Express employ when his mother Mary Ann became ill. He soon sought to enlist in the Union Army, but was turned away as too young.

He began driving supplies in a freight caravan in Wyoming and by 1864 the still-teenaged Cody was part of the Kansas cavalry.

“He claimed he was a scout, but that might have been pushing it,” Johnston said.

Still, in his 1908 book “True Tales of the Plains,” Cody told a tale of being summoned by a general because of his Plains background and assigned as a spy infiltrating the Confederate camp of Gen. Nathan Bedford Forrest to provide false information.

“If I were to be caught, I should be hanged,” Cody wrote. “But it was service for the Union. So I accepted the mission.”

Cody wrote that once found out, he had to flee under gunfire.

In 1866, Cody married Louisa Frederici. They had four children, although were frequently apart for long stretches over the next 41 years.

Cody became a Plains scout in 1868. By all accounts Cody was exceptional, demonstrating bravery in conflicts and leadership in the field.

“He really did stand out as a scout,” Johnston said.

The fateful altercation leading to the awarding of the Medal of Honor to Cody occurred April 26, 1872, in Nebraska where Cody and a detachment of six men pursued a band of Indians.

Cody led a stealthy approach, killed a combatant and subsequently led another group of soldiers flushing out  hidden warriors.

Capt. Charles Meinhold filed the Army report praising Cody. In part it read, “Mr. Cody had guided Sgt. Foley’s party with such skill that he approached the Indian camp within 50 yards before he was noticed.”

Meinhold added, “Mr. William Cody’s  reputation for bravery and skill as a guide is so well established that I need not say anything else but that he acted in his usual manner.”

What Cody wore might seem insignificant, but it became important in the next chapter of his Medal of Honor chronicle when he was described as a civilian, not a soldier.

By 1867, Cody was being paid $500 a month to slay buffalo to feed Kansas Pacific Railroad workers.

In his 1879 autobiography, Cody reported once being attacked by Indians after killing 15 bison with the calvary rescuing him and his butchering partner who were slowed by their wagon’s limits.

“Two hours later we reached the camp with our meat,” Cody wrote, “which we found to be all right, although it had a few bullets and arrows imbedded in it.”

During his buffalo-hunting days, Cody claimed 4,280 of the animals.

“He was a good shot,” Johnston said. “He would have had to be a good shot and a good rider. He circled the herd on his horse with his knees guiding it.”

Cody reported, “Brigham would take me so close to the next that I could almost touch it with my gun.”

Cody once said he was first called Buffalo Bill in 1867. But he cemented the nickname in a shoot-out against another buffalo-hunting Bill named Comstock.

In front of 100 spectators, including wife Louisa and daughter Arta, who had taken an excursion train from St. Louis to the Kansas prairie, the Bills pursued galloping herds. Cody prevailed 69-46 in kills. Champagne was imbibed and forevermore Cody was known as Buffalo Bill. He could not realize at the time he had won a million-dollar nickname, never mind merely a $500 side bet.

Johnston said those who blame Buffalo Bill for the near-extinction of the species are tremendously overreacting.

“Wiping out the entire species?” Johnston said. “His share was pretty small compared to others.”

Cody did participate in well-publicized hunts. In addition to the Comstock showdown, Cody guided Grand Duke Alexis, Russian royalty, and his compatriots on a buffalo hunt at the behest of the U.S. government.

On the hunt with the 22-year-old son of the Emperor of Russia were Gen. Philip Sheridan and George Armstrong Custer. It was a grand success.

Cody got to know Custer fairly well and was as aggrieved as other Americans when it was learned Custer and his 7th Calvary had been annihilated at the Battle of the Little Bighorn on June 25, 1876.

On July 17, Cody was guiding a troop led by Gen. Wesley Merritt in Nebraska when it came upon a band of Cheyenne. The Native leader Yellow Hair, (often translated as Yellow Hand) and Cody clashed one-on-one as the groups met at the Battle of Warbonnet Creek.

Cody recounted Yellow Hair, in his language, calling to him, ‘Come on, come on, White Yellow Hair (Pahaska)!”

Using a rifle, Cody shot and wounded Yellow Hair, shot his horse, then killed him. He then sheared his skull, yelling “First scalp for Custer!”

Newspapers reported the scene and it was incorporated into Cody’s Wild West.

In his diary, Lt. Charles King reviewed the conflict: “After a hand-to-hand struggle, Cody wins, and the young chief, Yellow Hand, drops lifeless in his tracks after a hot fight. Buffalo Bill is radiant. His are the honors of the day.”

This killing enhanced Cody’s reputation. Later, he did not seem as proud of the scalping.

It is not clear how proud Cody was of the Medal of Honor either since the medal was not as revered as it is today.

The Cody of the late 19th century was known to be generous with his belongings and not particularly sentimental.

“He gave away things right and left,” said Lynn Houze, a former assistant curator of the Buffalo Bill Museum.

Fees said Cody simply gifted his medal to family members in Pennsylvania on a visit.

Some years later Cody regretted parting with the medal. His old friend Nelson Miles was the commanding general of the Army between 1895 and 1903 and Cody wrote to him requesting a replacement, Fees said.

Miles obliged and that’s how there came to be two legitimate Cody medals.

Only a few months after Cody died a century ago, Congress re-evaluated medal criteria and the old scout was one of a number of recipients whose name was stripped from the rolls. The justification was that Cody was a civilian at the time.

The matter languished for about 70 years. Fees came upon a for-sale ad for Buffalo Bill’s medal, which the museum obtained for an undisclosed price in 1983.

“I got it from a collection in West Chester, Pa.,” Fees said.

Also, Cody descendents ratcheted up efforts to restore his name to the Medal of Honor list. Fees wrote the appeal and Sens. Al Simpson and Malcolm Wallop  of Wyoming wielded a little clout.

Fees contends the medal in the Buffalo Bill Center is the one Cody was presented with and gave away.

Freisen contends the medal in Colorado is the original, turned over to the museum by Baker.

Of Fees’ version of the Cody medal’s travels, Freisen said, “That’s his theory. I find that a little dubious.”

“Steve is like the little brother who keeps pestering you,” she said, “because this is the more well-known museum.”

Cody was one of 910 people whose Medal of Honor was revoked in 1917 and one of five scouts. In July of 1989, the Army Board For Correction of Military Records reversed the 1917 action, reinstating Cody and the other four scouts.

Cody’s grandson, Bill Garlow Cody, then-76, expressed his pleasure and said the family always believed the injustice would be rectified.

In 2014, True West magazine published a thorough article telling the story of two medals. However, it stated the Cody family was given a replica of the medal in 1989,  implying there are three real Cody medals.

“I would doubt it,” Garlow said. “I have some of my dad’s stuff and it would be there.”

Two Buffalo Bill Congressional Medals of Honor are quite enough for historians. A third bona fide medal would boggle their minds.