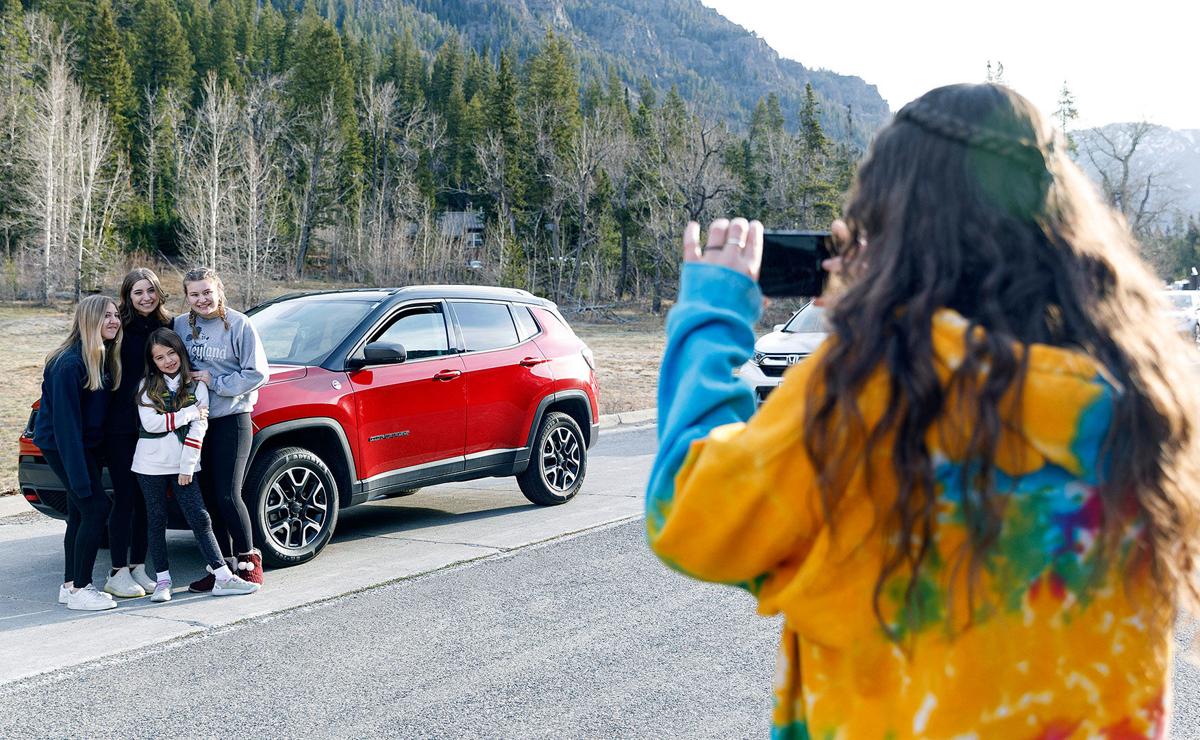 Stacy Boisseau of Powell (right) takes a photo of Hailey McIntosh (from left), Kiya McIntosh, Kenzie Clarkson and Grace McIntosh at the East Entrance of Yellowstone National Park on Friday. The group has been the first into the Park on opening day for the east gate three years in a row.

Cars line up outside the East Entrance to Yellowstone National Park waiting to enter on opening day Friday morning. 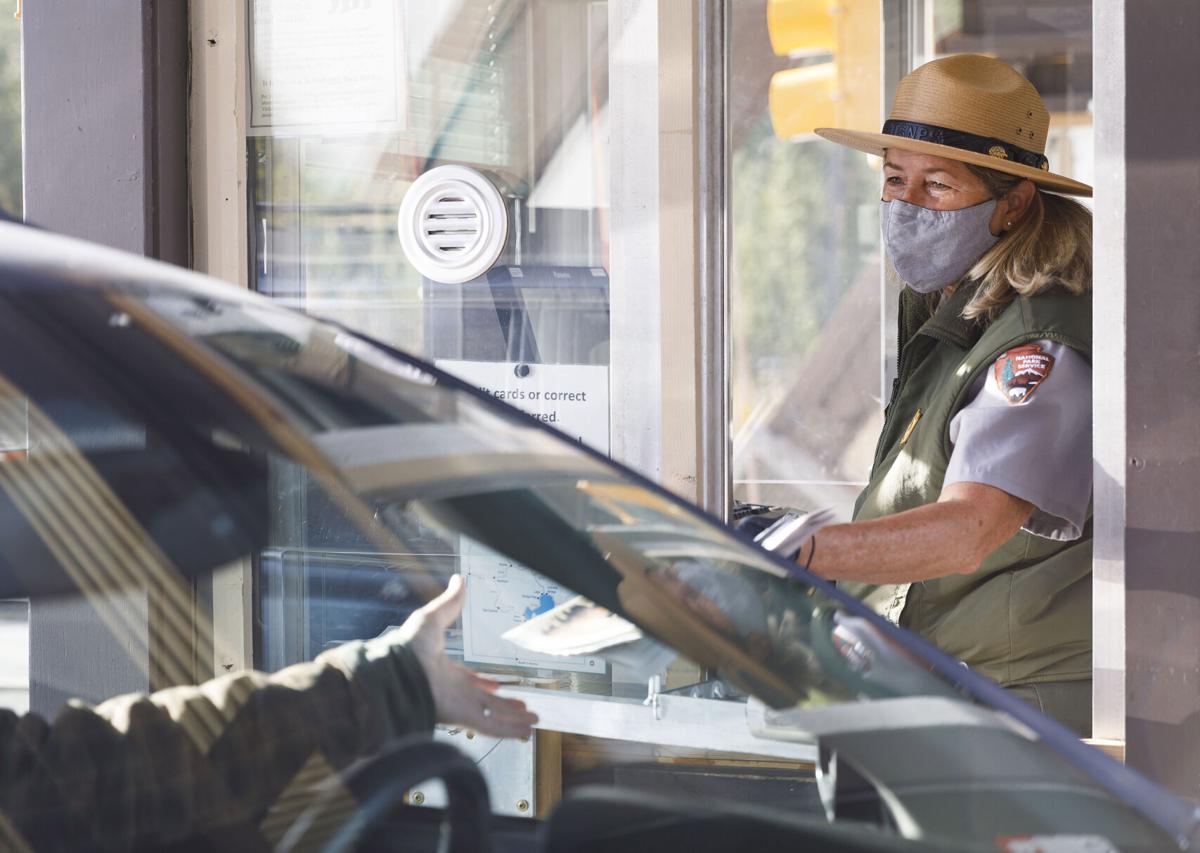 Kimberly Kain welcomes guests to Yellowstone through the east gate on Friday morning. 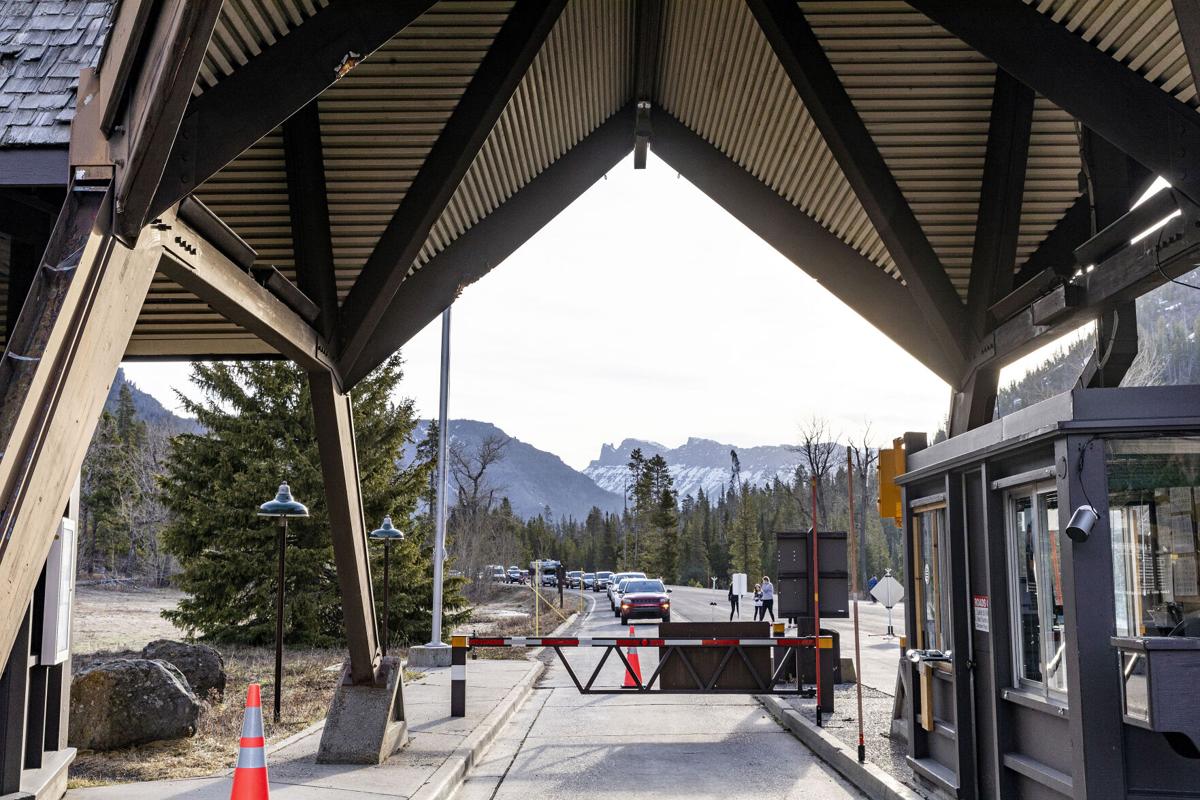 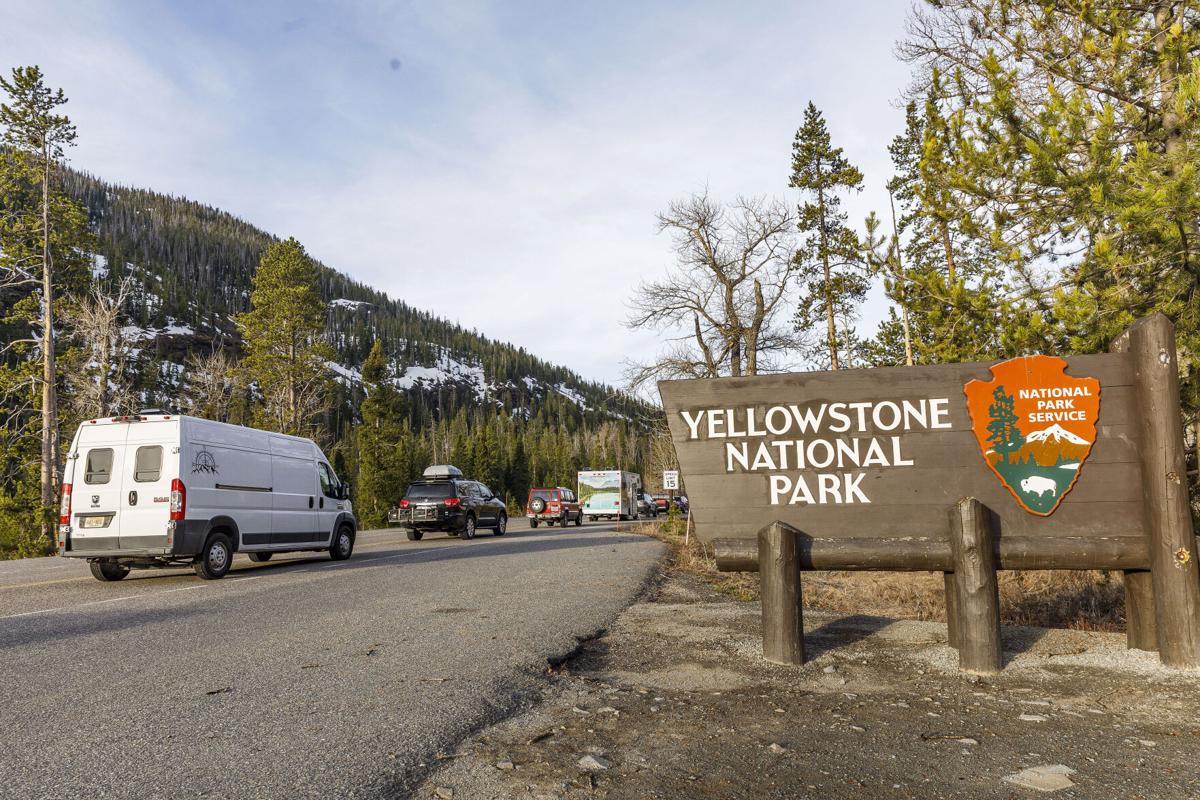 Stacy Boisseau of Powell (right) takes a photo of Hailey McIntosh (from left), Kiya McIntosh, Kenzie Clarkson and Grace McIntosh at the East Entrance of Yellowstone National Park on Friday. The group has been the first into the Park on opening day for the east gate three years in a row.

Cars line up outside the East Entrance to Yellowstone National Park waiting to enter on opening day Friday morning.

Kimberly Kain welcomes guests to Yellowstone through the east gate on Friday morning.

For many of the visitors and staff who gathered at the East Entrance of Yellowstone National Park, the season opening on Friday morning was a small sign of a return to normalcy.

Cars, RVs, trucks and vans – some jam-packed with more passengers than seats and more dogs than people – formed a line more than a half-mile long in anticipation of the gate’s opening. This year is the 149th season for America’s first national park.

“You see stuff (here) you will not see anywhere in the world,” East Entrance Supervisor Brian Perry said.

Perry chuckled about how his biggest priority on Friday morning was making sure his computer worked, a unreliable device to be relying on in the low-bandwidth wilderness.

Last spring the east gate only opened about two weeks late due to COVID-19 concerns, but visitation didn’t pick up until midway through the summer. Friday 503 vehicles drove through the gate, far above the 168 from the same date in 2019.

Phil Poirier, a driver for Cody Wyoming Adventures, said they already have substantially more bookings for their summer season than at this point last year, and have even purchased an open-air tour van to provide guests a convertible-like experience for their Yellowstone voyage. Besides being able to drop the top, the van that seats up to 15 people shares little in common with its sportscar counterpart.

Rob Coe, manager at Pahaska Teepee Resort, said although it was a pretty slow opening day to start, the business has many guests coming towards the end of the month.

“It seems like more getting back to normal just like everyone,” said Cody resident Daniel Bradford who was accompanied by his friend from Wisconsin.

It’s not completely back to normal, however.

Under rules established by President Joe Biden shortly after, he took office, all national parks are requiring face masks to be worn in indoor spaces and outdoors when social distancing cannot be achieved, a scenario that could occur in high visitation locales like Old Faithful. Last year national parks simply recommended mask wearing. Perry said the Park considers measures like these similar to permanent Yellowstone rules like keeping a safe distance from animals. That’s the biggest concern of Wapiti residents Laura DeFeo and Tom Davis, who also lined up before the gate’s opening.

Perry said anyone feeling sick should wait until they feel better before visiting the Park.

“It’s going to be another COVID year, so to speak, because we’re still in the middle of a pandemic,” Perry said. “We’re really, really optimistic that as time moves on it will get better and better.

“Hopefully we’re sitting here next year without any masks on.”

Pat and Jack Sabataso of Florida and Vermont, who had recently received their vaccines, said they felt comfortable packing up the camper and visiting a slew of national parks. The brothers circled opening day as their first trip to Yellowstone.

“One of the most picturesque rides I’ve ever had,” Jack Sabataso said. “My cellphone is running out of film.”

Arriving at the gate around 5 a.m. may have felt like sleeping in for the family this year. Last year they got in line at 12:01 a.m.

“We had the chance to do it again,” Boisseau said of their still-early arrival. “It’s becoming a bit of a tradition.”

She said cars filed in noticeably quicker behind her than they had last year.

Although they didn’t see much wildlife on the way to the Park, they did get a view of the low-flying satellites recently launched by Elon Musk’s SpaceX as part of its Starlink internet service. A number of people across the country had a variety of theories, but Boisseau and her daughters weren’t fooled.

“When we saw the first one we thought it was a shooting star but then we realized,” Boisseau said.

Although the opening of the east gate symbolizes the beginning of the summer tourist season in Cody, opening day is actually a bit of a local’s favorite as well. Perry said he is on a first-name basis with many familiar faces.

“Coming out here every year, it’s a really big event,” Perry said. “You don’t see this really at the other entrances. Ours is more of an event. It’s because of the local community. They take a lot of pride in Sylvan Pass and the East Entrance.”

The first few and last few weeks of the Yellowstone season are typically most appealing to local residents for visiting the Park, as during those times traffic is at its lowest levels. But Cody resident Clint Preston said last season offered an unusual opportunity to avoid crowds even in the midseason thanks to the drop in tourist traffic.

“Because of COVID it was really nice the first couple of months,” he said. “This year and other years, you have to come early.”

Preston, an amateur wildlife photographer, said he planned to shoot the grizzly known as Raspberry and visit Old Faithful during his full loop around the Park.

At 8 a.m. the gate dropped right on schedule and visitors slowly started pouring in. Temperatures were already 15 degrees higher than the sub-freezing weather just one hour earlier, a classic spring morning in the high mountains.

“The early (season) is just pretty though. You’ve got some snow, you’ve got some contrast with all your colors,” said Worland resident Randy Allen, a frequent opening-day attendee and visitor to the Park all year long. “It’s always a good time to be here.”

Perry has seen four opening days since becoming a gate supervisor for the Park, each one of them with its own distinct memory. This year will be the one he remembers as the year everything started getting back to normal.

“I feel really comfortable,” Perry said. “We already have a year under our belt.”