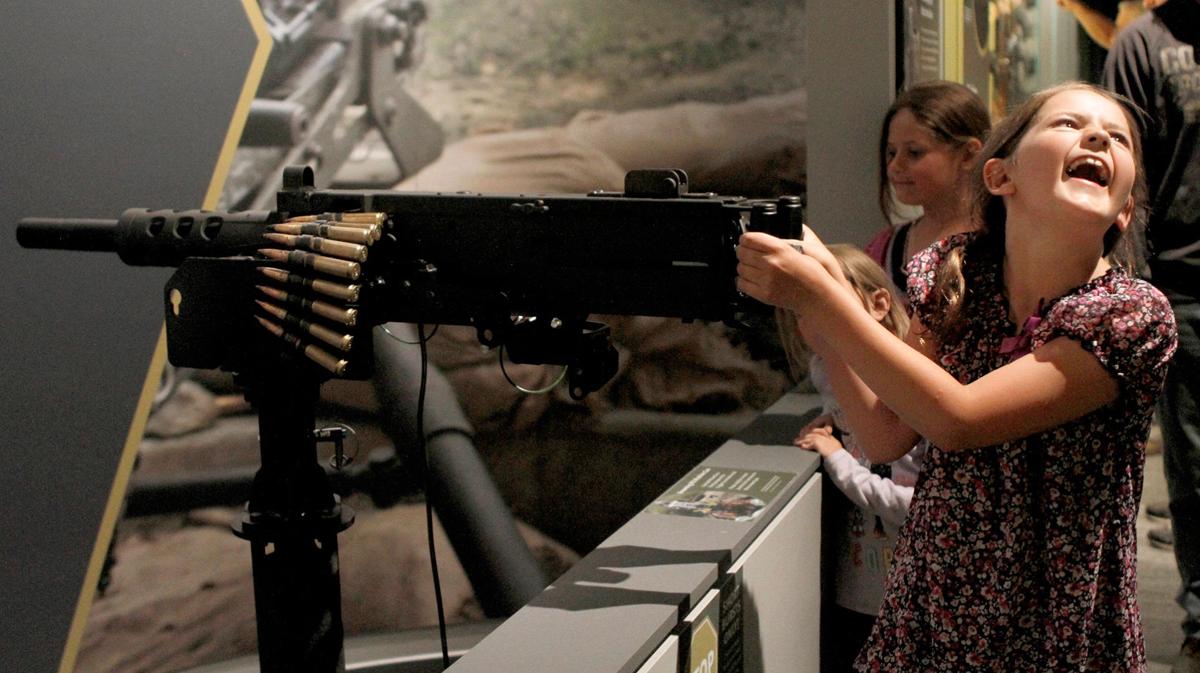 Haylee Bertalot, 9, of Cody tries the machine gun simulation Saturday at the grand reopening of the Firearms Museum. 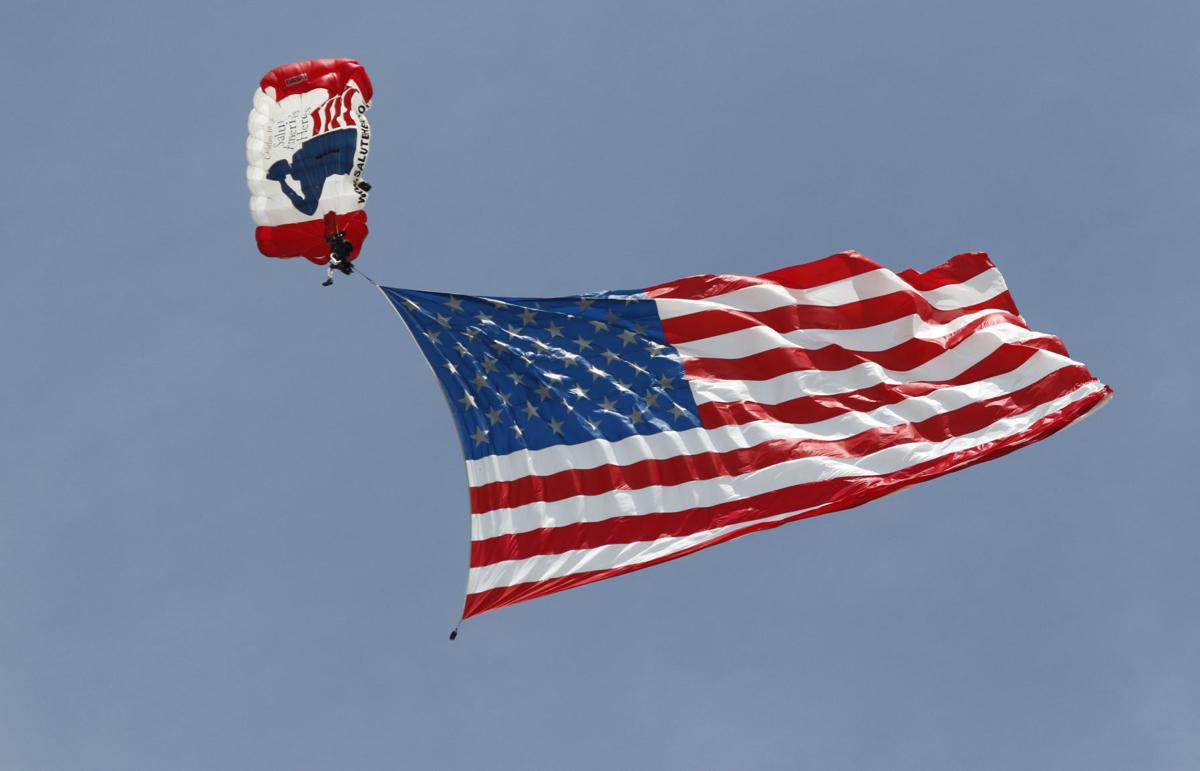 Sky diver Dana Bowman, retired from the U.S. Army, paraglides into the Firearms Museum event Saturday outside the Buffalo Bill Center of the West. 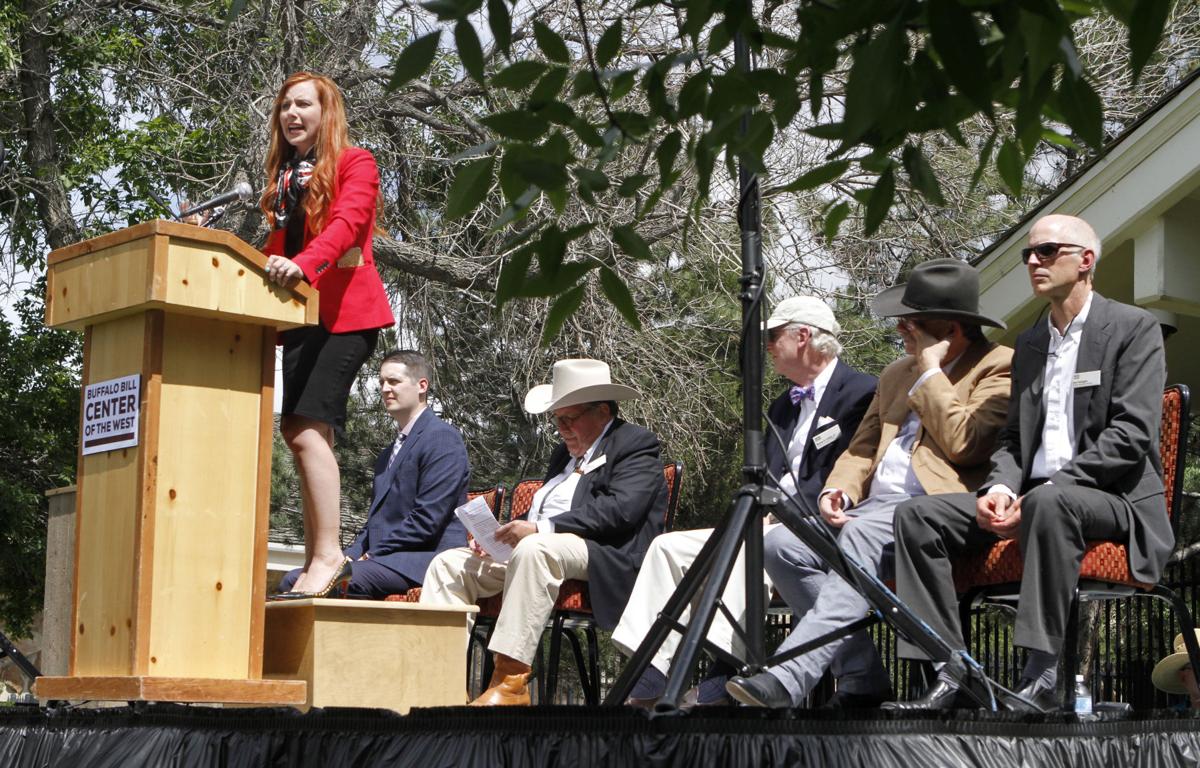 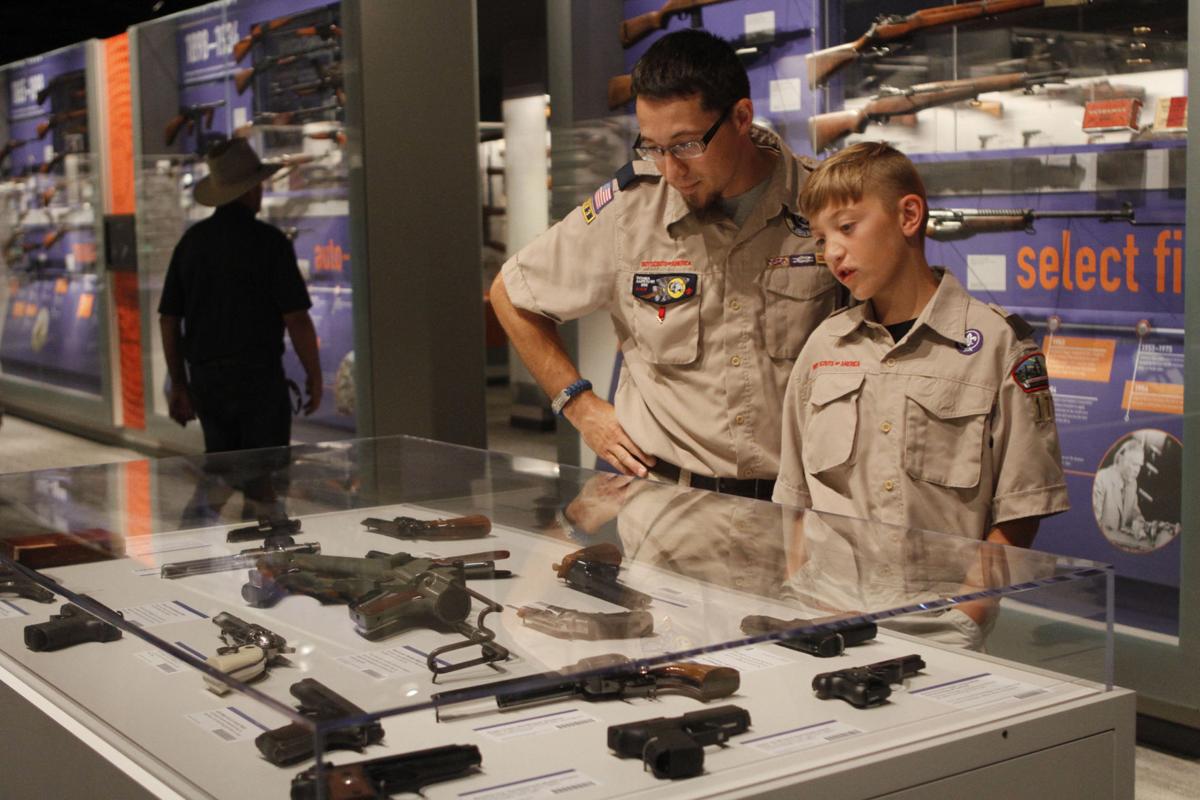 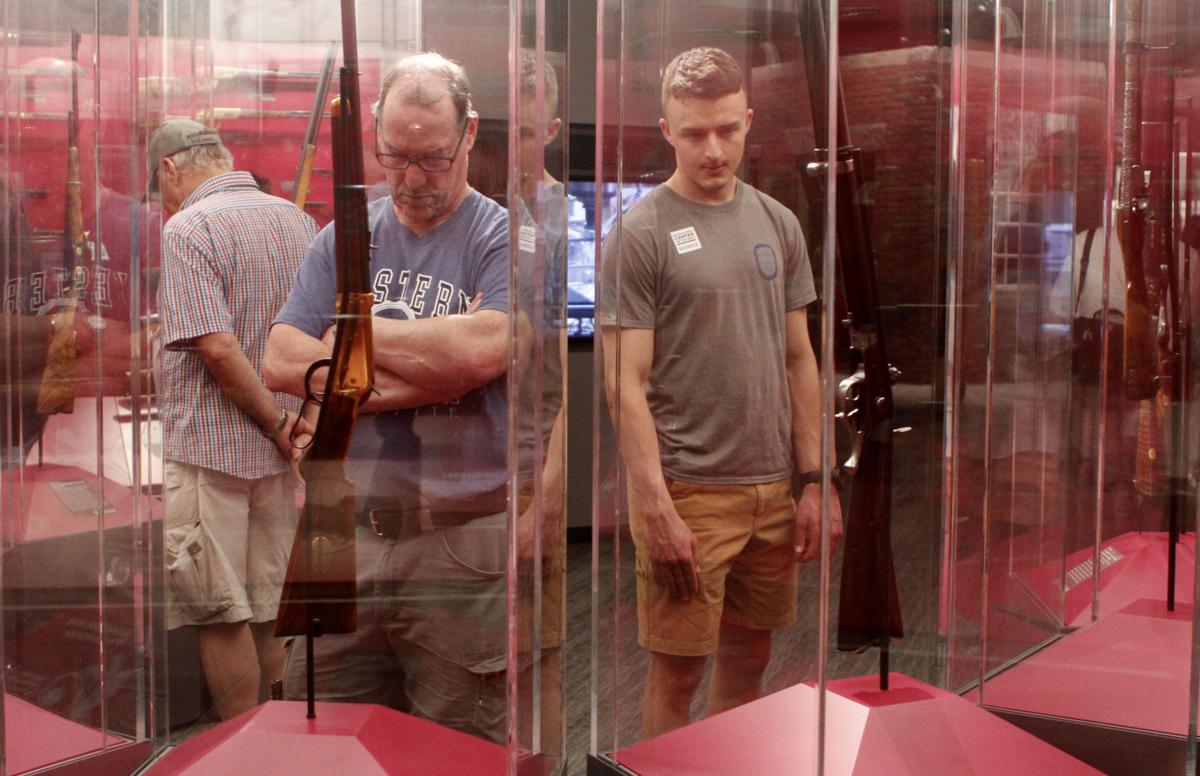 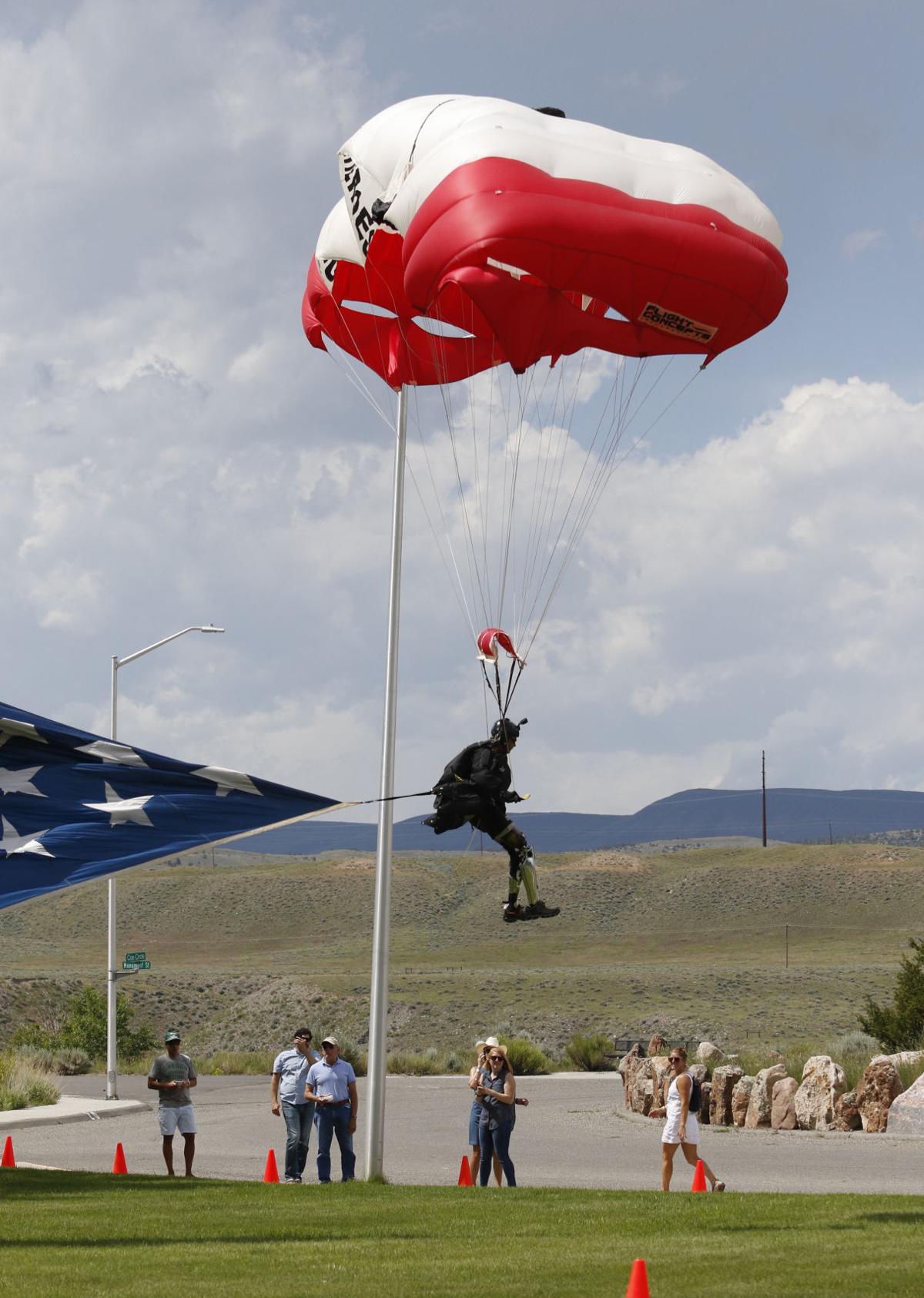 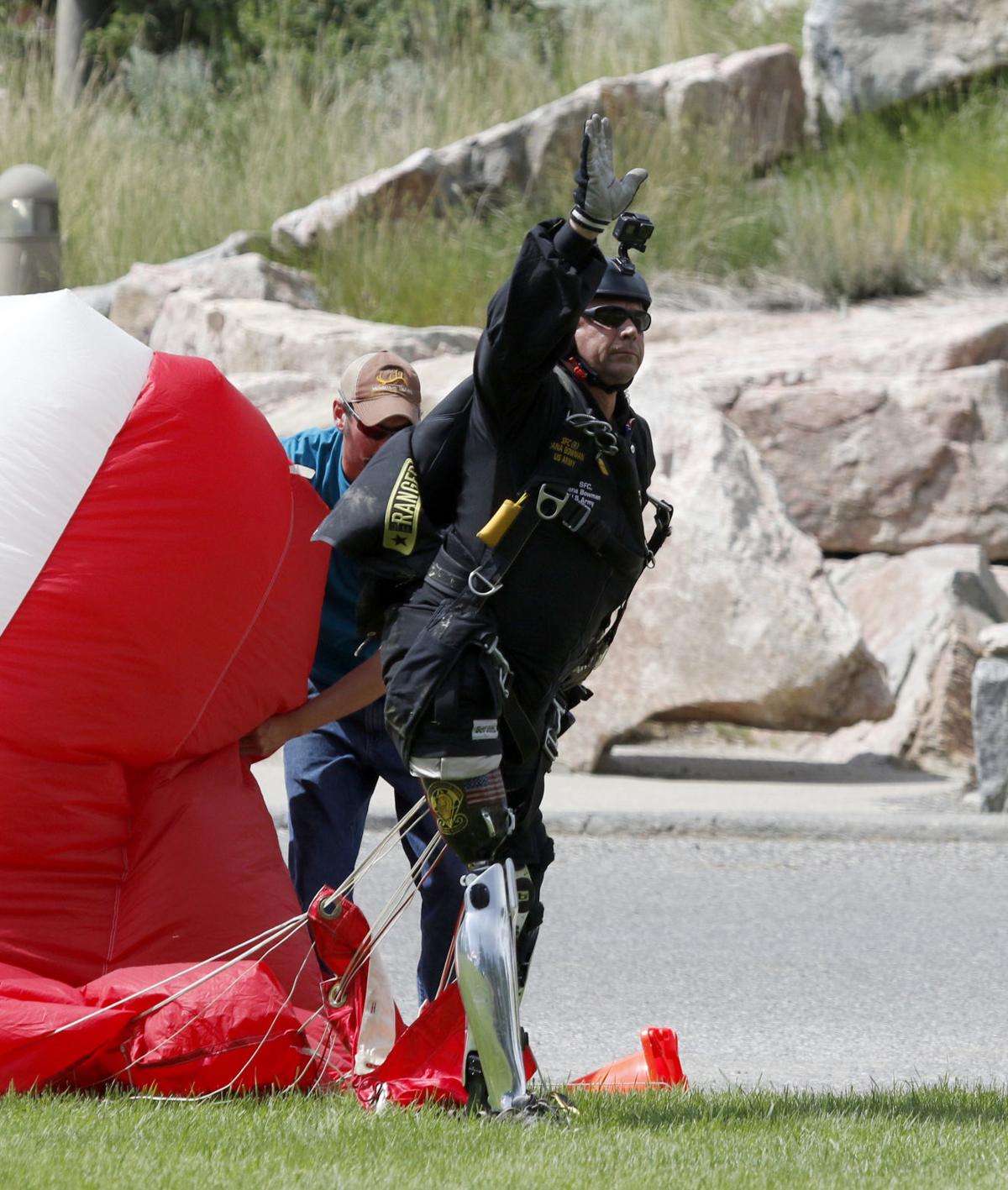 Haylee Bertalot, 9, of Cody tries the machine gun simulation Saturday at the grand reopening of the Firearms Museum.

Sky diver Dana Bowman, retired from the U.S. Army, paraglides into the Firearms Museum event Saturday outside the Buffalo Bill Center of the West.

John Wayne was present by proxy this time, but the grand reopening of the Cody Firearms Museum was just as festive as its original grand opening as the Winchester Arms Museum 43 years ago.

In a backyard ceremony Saturday, Buffalo Bill Center of the West officials rang the same bell the famous western actor clanged in 1976 when the loan of the Winchester guns collection became the foundation of the current-day operation.

At the end of 1988, the loan became a permanent gift and a few years later the firearms wing got its own concrete space in the Center.

Saturday, an audience of a few hundred gathered on the lawn adjacent to “The Scout” statue of Buffalo Bill at the rear of the museum.

Most observers were seated in bleachers and chairs, while others stood for the afternoon event held in 80 degrees and abundant sunshine.

The ceremony marked the public welcome for the $12-million-plus project that renovated and modernized the Firearms Museum’s 40,000 square feet of space.

Barron Collier II, chairman of the Center’s Board of Trustees, said the new version of the Firearms Museum “celebrates the centuries-old  history of firearms” and is “the finest” of its kind in the world.

The project provides for more of the 10,675 objects in the collection to be displayed, makes the museum more interactive, and adds considerably more educational material in an open-arms approach to non-gun aficionados.

Center trustee Peter Kuyper, also chairman of the firearms advisory board, drew a laugh when he noted those attending a similar ceremony in 1976 saw the genuine article John Wayne, but this time, “You have me holding a picture of John Wayne.”

This effort, Kuyper said, “is the second chapter.”

Prior to speeches, skydiver Dana Bowman, retired U.S. Army, glided to a perfect landing while linked to an extra-large American flag.

Bowman descended on-target, only feet behind those bleachers, greeted by clapping and whistles.

The fundraising campaign for this renovation was announced in November of 2017 with a goal of collecting $12 million.

Kuyper touted the finished product as “on time and on budget,” though the cost exceeded 12 million, but was below $13 million.

Firearms museum curator Ashley Hlebinsky, who oversaw most of the effort, said she recently turned 30, and it seemed “I gave my 20s to the renovation of the Cody Firearms Museum.”

That included planning time. The July 6 opening date had long been planned, but Hlebinsky said it was only the preceding Sunday when it hit her the project was at the finish line.

Of the thousands of items in the collection, Hlebinsky, a firearms historian, said she is often asked which is her favorite.

She said it depends on the moment, but did express a fondness for a particular Thompson sub-machine gun.

“It was famously misused,” Hlebinsky said.

That weapon was employed in a New York bank robbery, but when it malfunctioned it was tossed aside, picked up by police and then traded to Winchester.

She would not reveal if an infamous criminal was involved in the story.

The provenance of some other firearms is clear, however. The museum collection houses a gold-plated gun owned by onetime Cody madam Cassie Waters, she said.

The inscription reads, “Every inch a lady,” Hlebinsky said.

After the outdoor speeches, the crowd was led inside the building for a ribbon-cutting at the Firearms Museum entrance.

Hundreds of people took advantage of free admission. Former CEO Bruce Eldredge, who retired last year, was one guest. Eldredge kicked off the fundraising campaign. He was passing through Cody as part of a vacation trip and stopped to see the finished product.

Seibert, who said he was raised around firearms but his children were not, made sure his children got shooting lessons recently after moving to Cody.

He marveled at the size of the crowd curious about the Firearms’ new look.