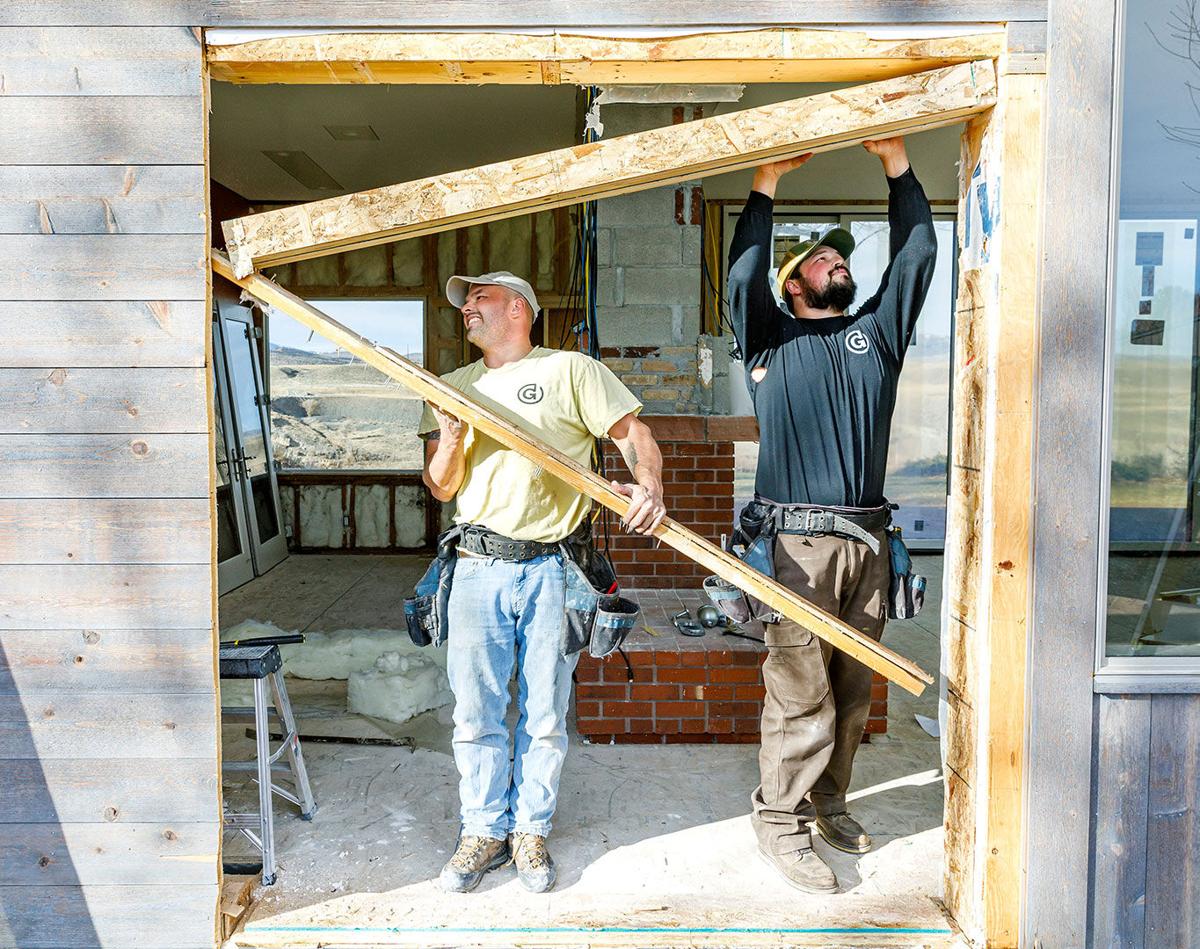 Brandon Higgins (left) and Brennan Fitzgerald of Gail Construction replace a sliding door while remodeling a home on Sunset Boulevard North on Tuesday. 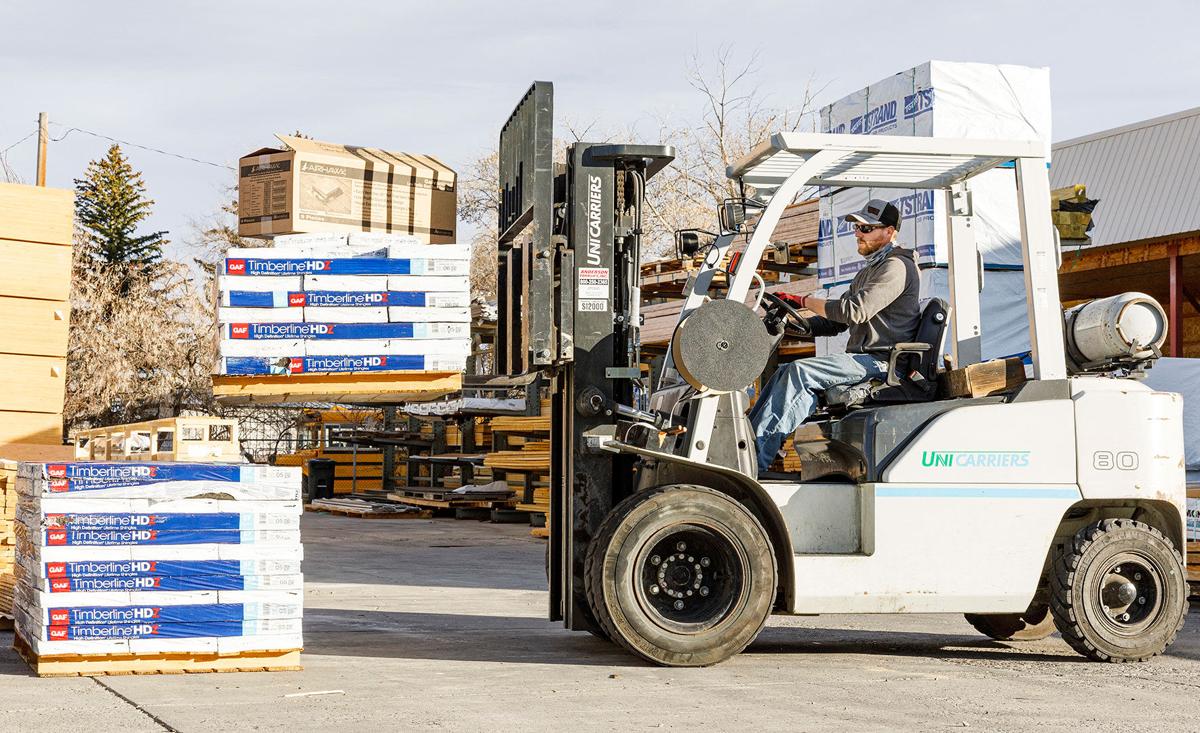 Charles Fisher moves wood with a forklift at Bloedorn Lumber on Tuesday.

Brandon Higgins (left) and Brennan Fitzgerald of Gail Construction replace a sliding door while remodeling a home on Sunset Boulevard North on Tuesday.

Charles Fisher moves wood with a forklift at Bloedorn Lumber on Tuesday.

The American supply chain in almost every industry has been affected by the COVID-19 pandemic, with materials for carpenters and contractors no exception. In a building boom like the one Cody is experiencing, that’s meant price increases and project delays.

“Basically, with the start of lockdowns early on in the season, that put people behind without the expectation of the majority of people wanting to stay home and wanting to do projects,” said Eldridge Perry, general manager of Bloedorn Lumber in Cody.

Shutdowns extended beyond the oft-discussed meatpacking industry and hit everything from sawmills to siding producers. That, coupled with a growth in DIY projects, caused the price of supplies like lumber to skyrocket. Perry says Bloedorn has been able to keep most items in stock, but wait times to get materials have lengthened.

“It’s been a boom summer for us for sure, just a little difficult on the timeframes,” Perry said.

In addition to shutdowns from producers, maintaining a high-quality inventory has also proved to be difficult.

“Part of the challenge in getting the material was that we can’t really request exactly what we wanted,” Perry said. “At that point, we were just trying to request whatever we could get so we weren’t running out of material.”

Prior to the pandemic, Bloedorn had been able to request specific brands or suppliers. The scramble for supplies has meant the quality of materials has gone down in some cases, and buyers are returning more items than they had in the past.

“They were sending a little more back than usual,” Perry said. “We did a lot of replacing for our major contractors this year, but we got through it.”

Perry also said he was happy just to be working during the pandemic.

For Cody Seamless Siding, the trouble has been less with availability and more with timing.

“I order my materials two months in advance,” said owner Greg Poley. “Normally, that’s been taking care of it, but it’s been a scramble on some things.”

Poley hasn’t had any shortages yet but said he expects them next year.

“A lot of factories expected a down year for construction but it’s been an up year,” he said. “Factories shut down from COVID and were expecting a down year. It’s got them behind.”

The pandemic isn’t the only thing that has affected Poley’s business. Riots in Minneapolis made some drivers not want to make the trek to suppliers there.

Even beyond the coronavirus’s effect on the supply chain, Poley said though work is steady, the virus has made it harder on his business.

“Our workload is still there,” Poley said. “The problems have been fighting the virus, workers quarantined and things like that. That’s been tough.”

Putting the buildings up has taken longer and cost more, reflecting the price of materials. For commercial contractors like Sletten Construction, that means higher prices for materials are hurting their bottom lines.

“We’re having to eat those cost increases,” said Shawn Warner, president of Sletten Construction. “We’re under a contract price. That’s part of the business.”

The construction boom has spread to commercial work, but Warner said that may be a bit misleading.

Delays in getting materials, particularly anything oil-based, have also put some projects on hold for the firm.

“We have some projects where important details haven’t been able to be buttoned up because the products aren’t being made,” due to the pandemic, Warner said.

Residential contractors have an advantage over their commercial counterparts in that they can pass off higher material costs to the buyer. It’s not clear if that has scared any potential customers away.

“We’ve had a number of inquiries where they were kind of excited and then have not called back,” said Doug Gail, co-owner of Gail Construction. “I don’t know if it was prices or somebody got them a better deal.”

Residential construction has been booming this year, with ground-breaking for many new houses in the Cody area, and Gail says it’s looking that way next year as well. Delays in getting materials haven’t hurt the company but require a bit more planning around.

“Early on, it kind of caught you by surprise,” Gail said. “You’re going along and you think products are going to be two weeks out like how they normally are, then all of a sudden, it’s six weeks. That sort of has a trickle-down through your whole project. Everything is so intertwined schedule-wise if you don’t get that one thing, that pushes everything back.”

Gail also said the volatility of COVID-19 infections meant that it was not the same product that was always short.

“It seems like it was different things at different times,” Gail said. “It affected windows at some points and engineered woods. Any product that has a factory aspect to it, which is almost every one, then COVID would go through and would limit their ability to produce a product in a timely fashion.”

It’s the commiefornians moving in building and not getting what they wanted so they probably started to melt like snowflakes. Come March it will be interesting to see how many are still here.