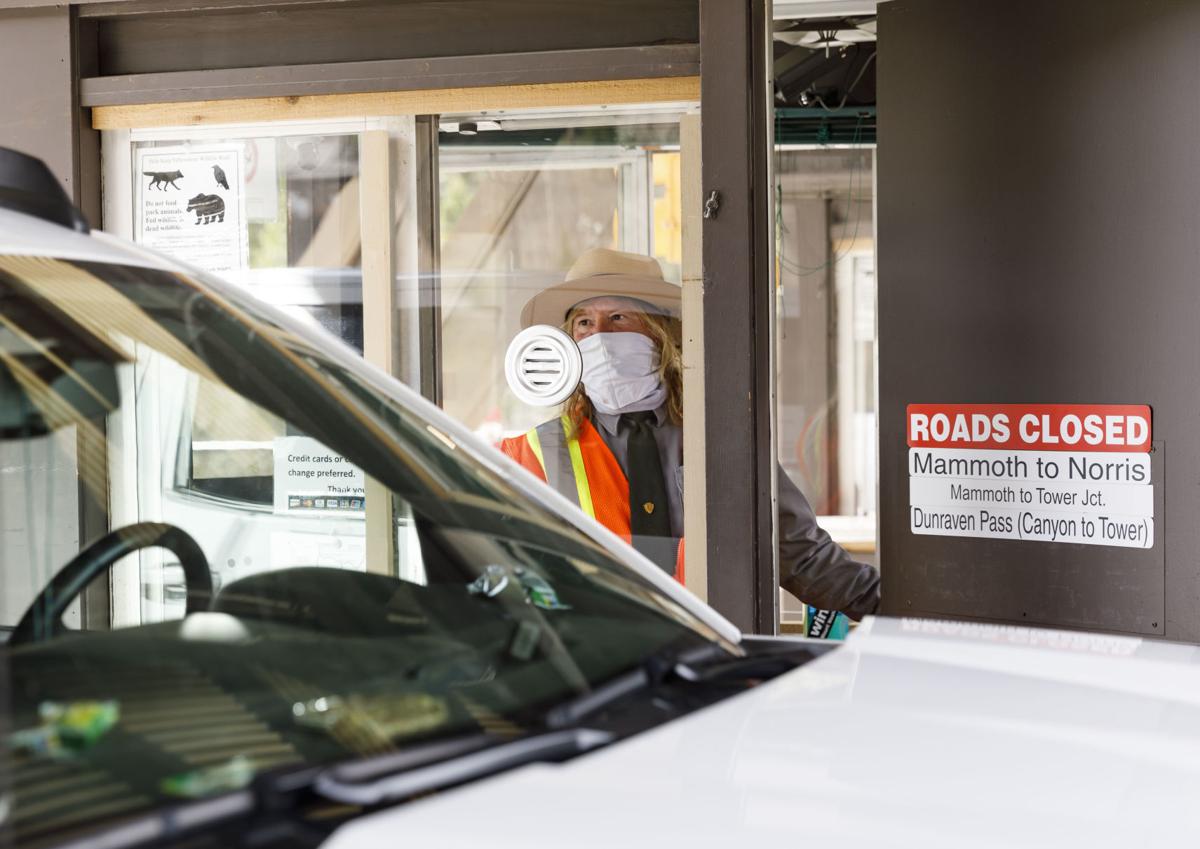 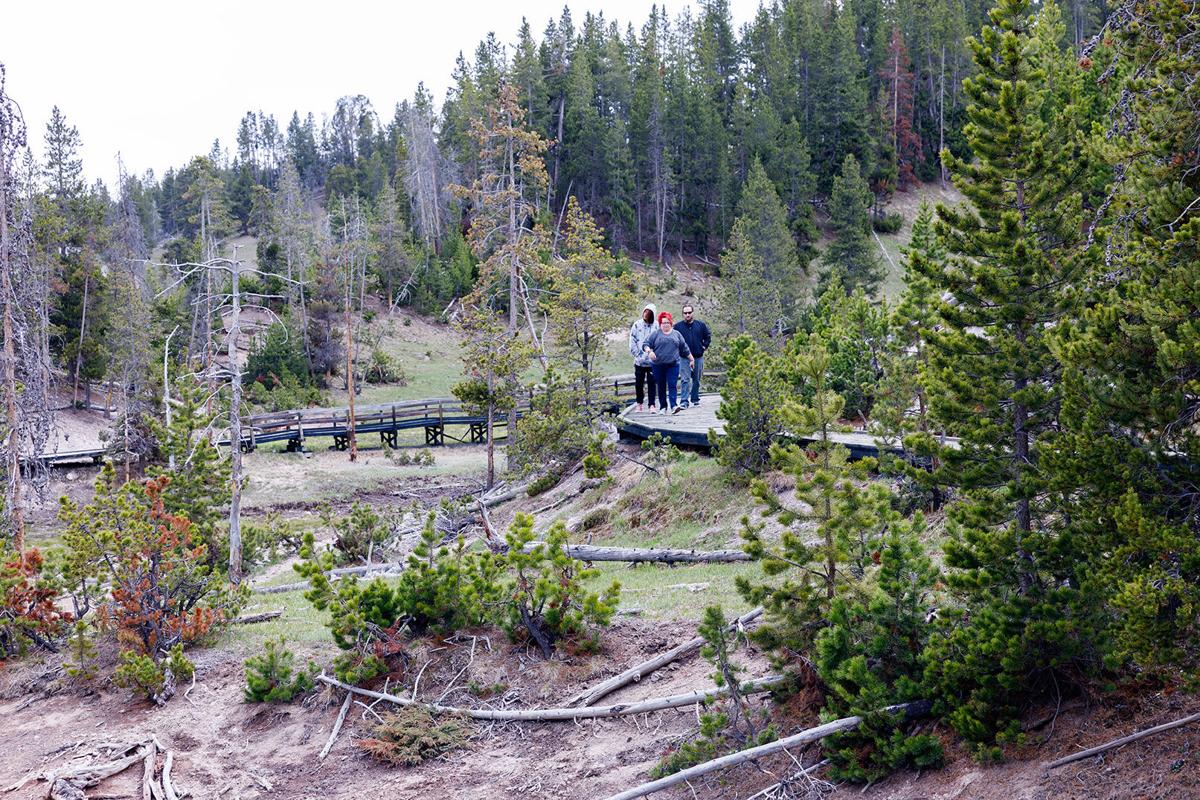 Shane (from left), Christine and Jacob Guyer of Texas visit Dragon’s Mouth Spring on the opening day at Yellowstone National Park on Monday. 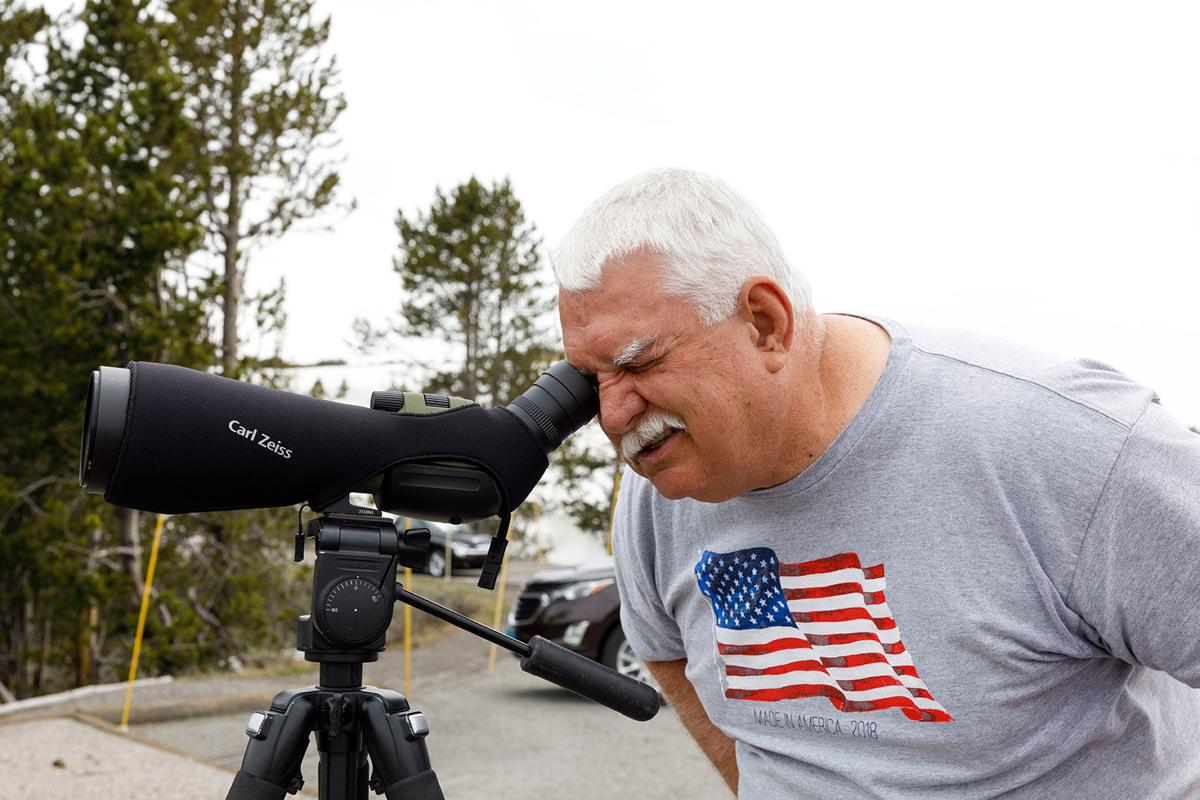 Ray Dixon of Utah looks for a grizzly with a scope in Hayden Valley. 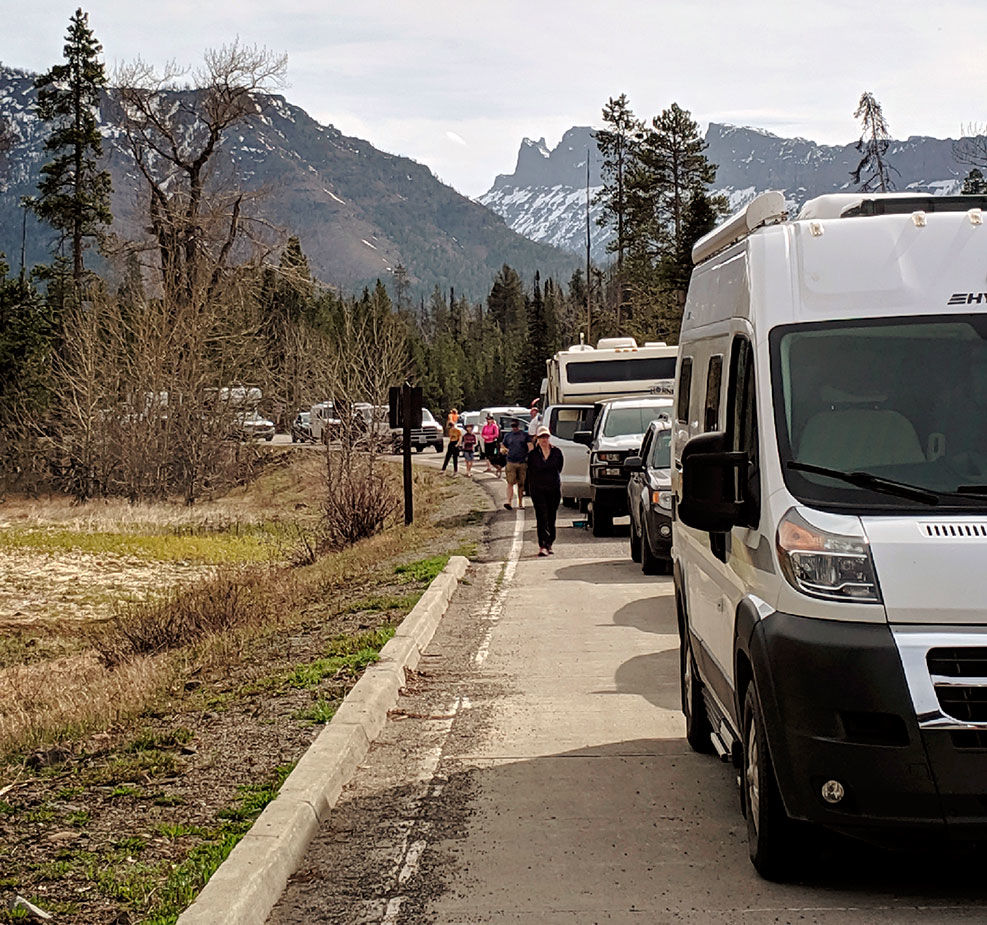 Visitors began lining up at midnight on Monday for the opening. (Photo by Stacy Boisseau) 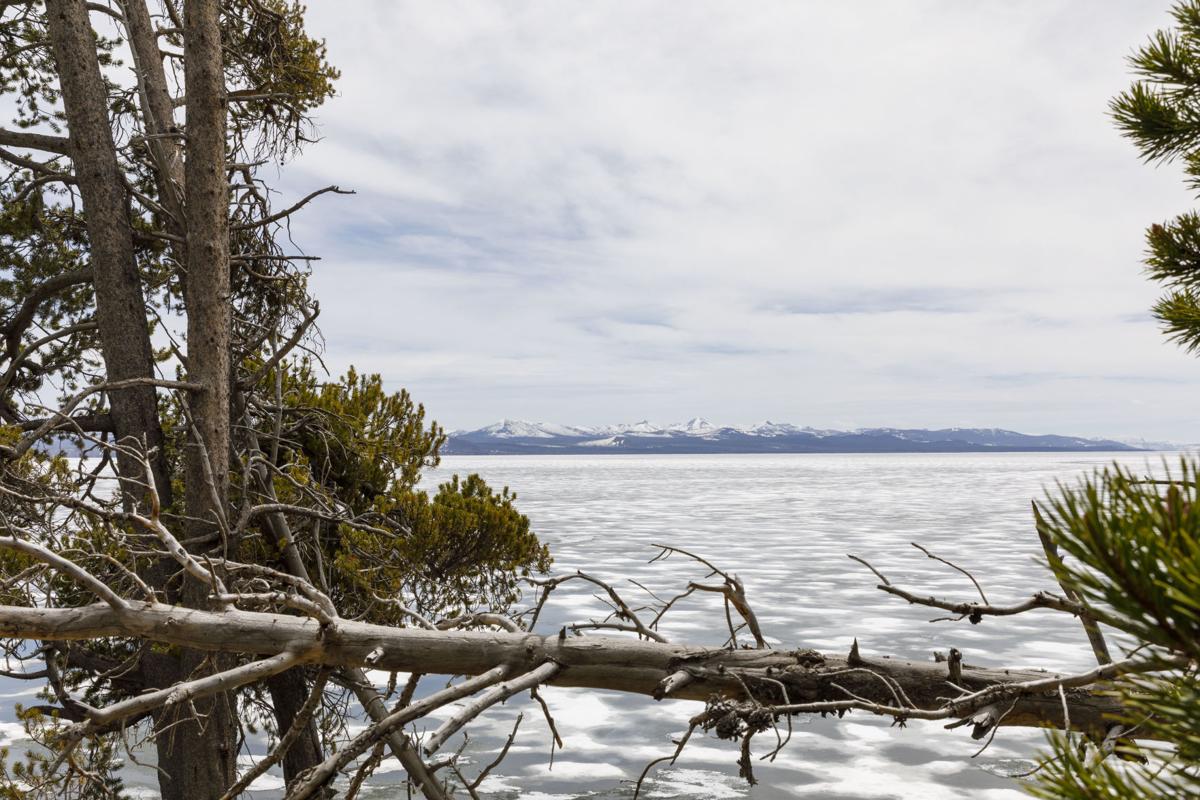 Yellowstone lake is still frozen over on opening day Monday, May 18th. 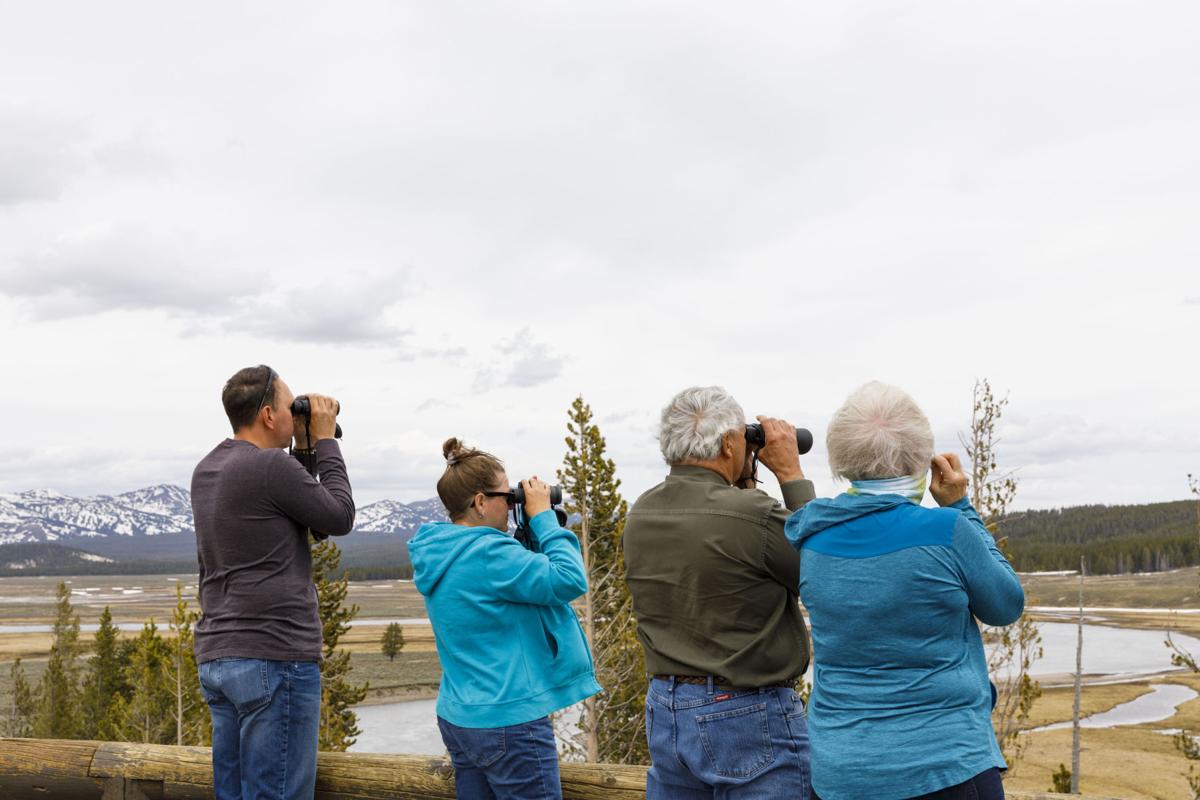 Patrick Holm, (from left) April Holm, David and Patricia look for a grizzly bear at Yellowstone on Monday, May 18th.

Shane (from left), Christine and Jacob Guyer of Texas visit Dragon’s Mouth Spring on the opening day at Yellowstone National Park on Monday.

Ray Dixon of Utah looks for a grizzly with a scope in Hayden Valley.

Visitors began lining up at midnight on Monday for the opening. (Photo by Stacy Boisseau)

Yellowstone lake is still frozen over on opening day Monday, May 18th.

Patrick Holm, (from left) April Holm, David and Patricia look for a grizzly bear at Yellowstone on Monday, May 18th.

First in was Powell resident Stacy Boisseau, along with her daughters Kiya McIntosh, 18, Hailey McIntosh, 13, and Grace McIntosh, 8. She said they got in line at 12:01 a.m. Monday. Gates opened at 10 a.m.

Boisseau has been on leave and out of work from her job at the 8th Street Restaurant at the Ivy Hotel for the past few months. She decided to use her coin jar savings from waitressing and make it a day to remember for herself and the girls.

“Never in my life, every year for 20 years visiting Yellowstone, have I ever been alone at Grand Prismatic,” Boisseau said. “It was beyond epic.”

They were rewarded for their early-bird efforts, treated to a moose sighting in the early morning hours. Boisseau said they also saw a porcupine waddling along the opposite side of the road and spotted five bears over the course of the day.

As they waited for the gate to open, the girls were given the junior ranger oath, and received retired pins from Brian Perry, Yellowstone National Park’s East Entrance supervisor.

“He was awesome,” Boisseau said.

Fellow early bird Jeff Walker, a Florida resident, also got a glimpse of a moose.

He said he was surprised the Park didn’t open even earlier.

On Monday, Yellowstone Superintendent Cam Sholly said 504 vehicles came to the East Entrance. Yellowstone reported 478 on the same date the previous year, which fell on a Sunday.

As of 4 p.m. Monday, Wyoming travelers made up the largest portion of contingency at the East Entrance with 154 vehicles, or 31%. California made up the second highest group with 17 vehicles.

Admission was free the entire day, a surprise to visitors.

Opening day 2019 came 15 days earlier and fell under much different weather with freezing temperatures and 5 inches of fresh snow falling on Sylvan Pass the night before. That snowfall caused an 80 minute delay to open the Park.

On Monday, temperatures were already near 60 degrees by 11 a.m at the East Entrance.

Cody residents Travis and David Egan came to Yellowstone with their families around the time of the prescheduled noon opening, but were treated to no lines when they arrived at the gate due to the earlier opening.

“We thought we were going to be waiting for a while,” David Egan said with a chuckle.

The moment visitors reached the gate they were reminded it would not be a typical Yellowstone visit. Posted at the entrance station was signage urging travelers to wear appropriate facial protection anytime they’re in a congested area. Adding to that message were the real-life face masks and gloves Park Service staff donned at the gate.

But few visitors were seen wearing masks inside the Park, even in moments of congregation. Photos taken by The Guardian newspaper at Old Faithful on Monday, revealed many people congregating without face masks.

But those types of situations were limited and the Park looked quite unlike a typical mid-summer’s day.

It appeared that most visitors on Monday rarely left their vehicles, and there was a few less reasons to do so. No stores or restaurants were open, and all campgrounds closed. Save for bathrooms and a few gas pumps, road pull-outs and boardwalks drew the most congregating, aside from the gaggle seen at Old Faithful.

The Egans planned on taking in Old Faithful from a distance with their families.

“We’re going to see if we can see it without being where there is a bunch of people physically standing in front of it,” Travis Egan said.

Since the northern loop of roads and three Montana gates accessing the Park are all closed, Kentucky travellers Vivian Haupt and Michael Ritter, along with their recently transplanted Montana friend Brittany Passanisi, had to make the much longer than typically necessary 4.5 hour trek from Livingston, Mont., to the East Entrance. Their first stop was an overlook of Yellowstone Lake, a much different scene from the dense, wooded terrain of their native Appalachian Mountains.

“We were just working our way down, we’ve got all day,” Ritter said with a smile.

He said the fresh Yellowstone air and vast nature of the Park put him at ease in regards to contagion from COVID-19, but the trio are still taking the risks seriously.

“We’re trying to stay away from the crowds,” Ritter said.

In many ways visiting Yellowstone in May is one of the best times of the year to visit the Park. Traffic is typically at its lowest point for the summer and the abundance of snow provides an amazing contrast for people who come from parts of the country that are already well into their spring and even summer.

The couple saw the unusual pandemic and time off from work as an opportunity to get out and explore the West.

“We packed our car up with even our coffee maker,” Sandi Barrera said.

The fellow Tampainian Walker, rented a luxury travel van in Bozeman, Mont., before making his way through the East Entrance. He spent the first few hours of his Park day Monday searching for wildlife in Hayden Valley.

It was his fifth visit to the Park.

“I can’t believe it took me so long to come out here. I’ve had the best time in my whole life here,” Walker said. “We have to take advantage of it while we can. You know the virus is going to come back around and might close things back down.”

Just a stone’s throw away, Cody resident Sandy Finamore caught sight of a grizzly bear traipsing through errant snow piles scattering the valley, no doubt in search of its next meal after a long winter’s hibernation.

Finamore moved to Cody last year from Maryland. She said Yellowstone was a major part of the decision.

Allison Powell is a Park concessionaire who works near the West Entrance. Contrary to popular projections, she said the last few months of self-quarantining and travel bans may entice a restless American populace to travel in larger crowds than ever to Yellowstone this summer.

“I think people are freaking ready to go,” she said with a laugh.