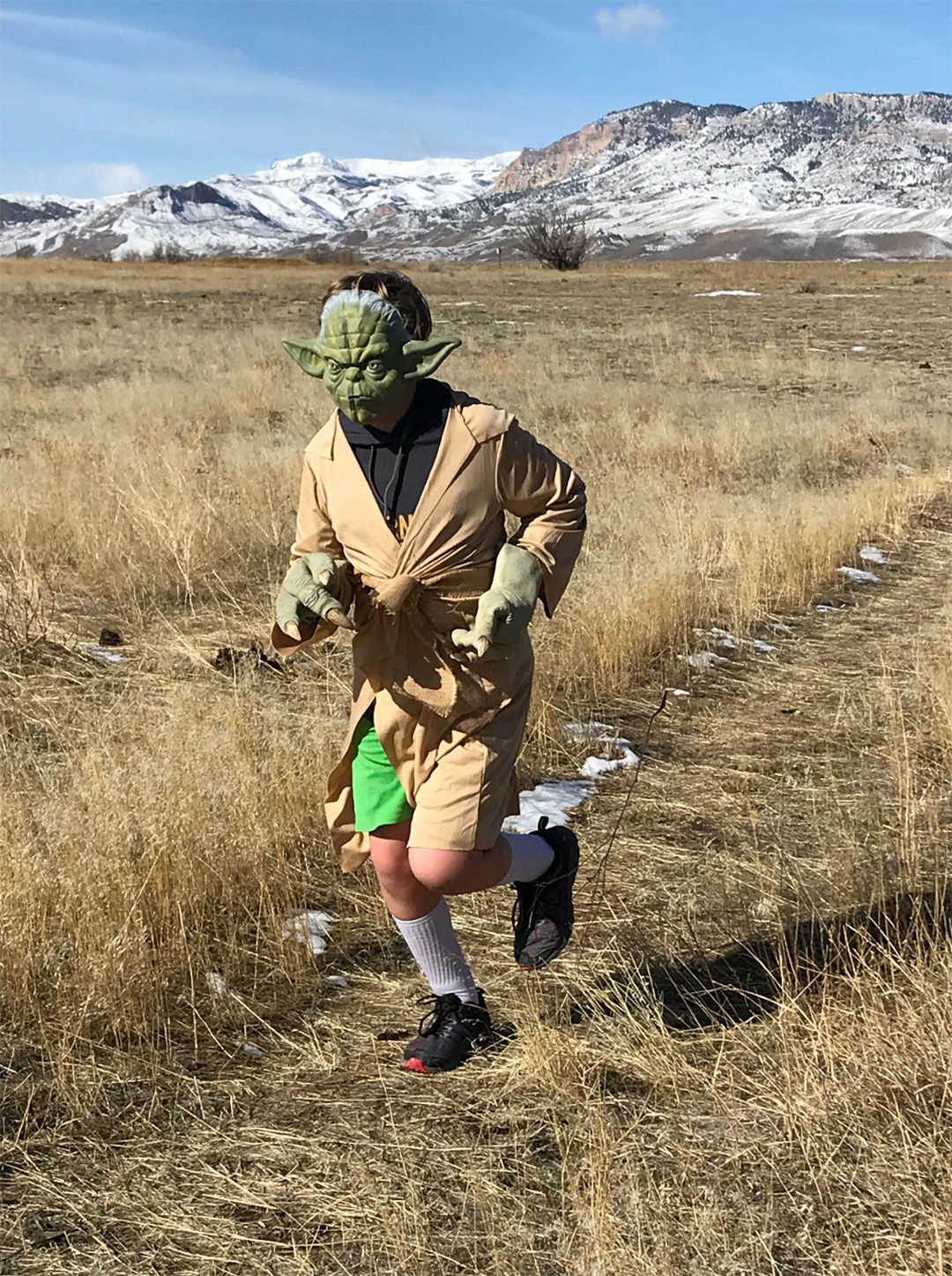 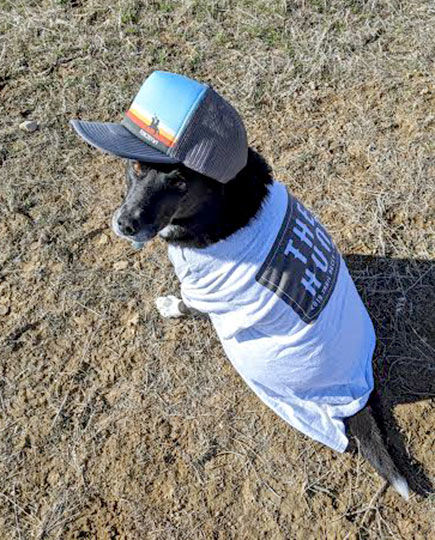 Panda the dog is dressed as a pacer and trail navigator by owner Jennifer Cramer on April 4.

Panda the dog is dressed as a pacer and trail navigator by owner Jennifer Cramer on April 4.

They ran or hiked distances of a quarter mile to more than 32 miles. Some climbed up to 3,500-5,000 feet in elevation as an added challenge.

Many chose trails in Park County and other remote Wyoming locations; others reported results from Montana, Idaho, Nebraska and Washington.

Jenar Jasso, who started an 18-mile run on White Mountain near Green River at 12:01 a.m. April 4, was the first to register of 65 people participating in the Virtual Hunt Trail Race.

Originally, RunCodyWY race director Janie Curtis had set April 4 for the Hunt Trail Races – a Wyoming trail run race in which competitors wear hunter orange as they run or walk distances of 1, 6 and 16 miles.

The start and finish for all three races were to be at the Cody Archery Range with aid stations along the trails manned by volunteers offering energy drinks and snacks.

When in mid-March the coronavirus resulted in public health officials warning people to avoid congregating, Curtis was quick to adapt the race to social distancing guidelines. She invited people instead to participate in a virtual race.

Using the Strava app on a smartphone, people could join the Virtual Hunt Trail Race club. Instead of racing for speed on the same trail, runners could run or hike on any trail or dirt road they chose anytime during race day.

“We will all be running together in spirit – at our own times and paces, and on our own trails – all while social distancing,” Curtis said when announcing the changed format.

Her goal was to challenge people to explore new trails and terrain.

“We have great established trail systems here,” she said. “But we also have countless dirt roads and game trails, all on public lands where you could never run the same route twice.

“And judging by peoples’ activity, there was lots of exploring.”

“But when I was informed it was being changed to a virtual format, I saw it as a great opportunity to be involved with the race and bring something different and fun into my current daily life,” he said.

Admitting nothing compares to a traditional race during which everyone runs together, Wrem viewed the virtual format as a great way to keep people involved and connected – to keep some normalcy in their lives – during a time when physical closeness isn’t wise.

“Events like this help to show that you can always find little ways to have fun, goof off and generally make the best of day-to-day life no matter what else might be going on in the world,” he said. ‘

They had all competed in past Hunt Trail Races. For the virtual run, they chose trails near their home by the South Fork shore of Buffalo Bill Reservoir.

When 11-year-old Orrin Couture learned about the race change, he dug out an old Halloween costume and recorded a 1.25 mile run to a pond near his house dressed as Yoda from “Star Wars.”

“It was fun because it was outside and it was sunny and I got to run any route I wanted,” he said.

For his 3.17-mile run, Talon Couture, 13, ran to a spot on an island in the Buffalo Bill Reservoir only accessible when water levels are low.

The virtual race was easier because he couldn’t see other competitors, which allowed him to run with less pressure and at a comfortable pace.

“The virtual race was actually better for my personality because I didn’t have to keep up with other people or look back over my shoulder to see if someone was coming,” he said. “Usually, I am in the back of a race, but this time it was like I was in the front of the race.”

At age 71, Amy Couture’s mother Nancy Hoffman has been a life-long runner who runs races in Cody organized by Curtis. She joined her family in the virtual event while staying close to her home near the golf course. She ran 4.26 miles on the network of dirt roads connecting Beck Lake and Red Lake.

Family friend Jenelle Varilla, in her 60s, joined the Couture family by participating in the Virtual Hunt Race by running several miles on a trail in Washington.

Rather than run, Jenny Cramer had volunteered to help at the Hunt Trail Race. Upon learning it was postponed, she immediately saw a chance to combine the virtual run with a planned 12-mile training run for a 50K later this summer.

“When Janie brilliantly turned it into a virtual event of any distance, it was an easy decision to participate,” Cramer said. “What surprised me was the level of interaction between participants as all of the runs were posting on Strava (that day).

She was also struck by the diversity of entrants’ ages and abilities.

“Janie created the prize categories in a way that made it fun and competitive whether the participant was walking a mile or running a technical trail marathon,” she said.

Cramer went all-in by dressing her dog Panda in a race hat and T-shirt to win the virtual hunt dog selfie category.

With no set course or distances, traditional awards for places do not apply to virtual racing.

Instead, Curtis awarded prizes in 10 categories.

Most were awarded gift cards bought in Cody as a way to support local small businesses – many struggling during the COVID-19 crisis.

Prizewinners who do not live close by received RunCodyWY hats.

To learn more about future races and events in and around Cody, including the Buffalo Bill Cody Races, a half-marathon and 10K in September, email Curtis at info@runcodywy.com or go to https://runcodywy.com/.