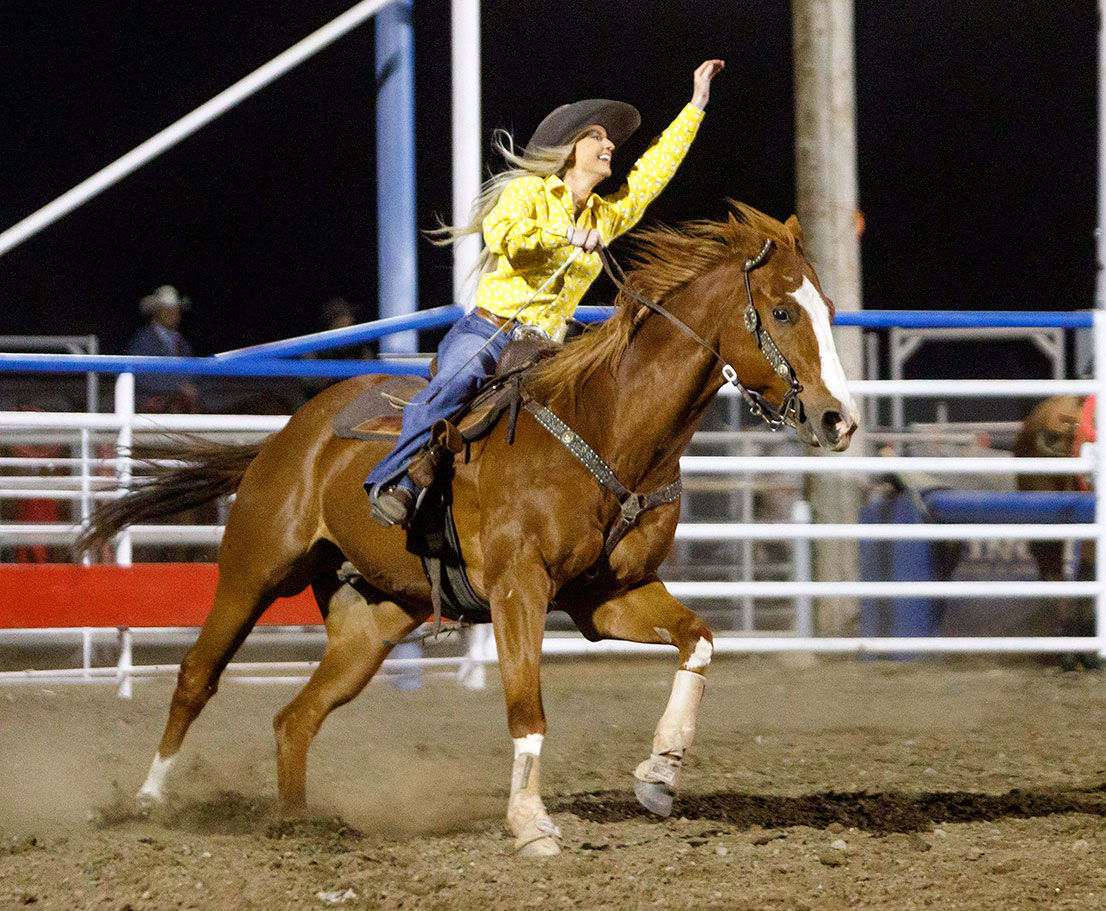 Hadley Tate celebrates winning the barrel racing June 25 during the Cody Nite Rodeo with a time of 17.40. 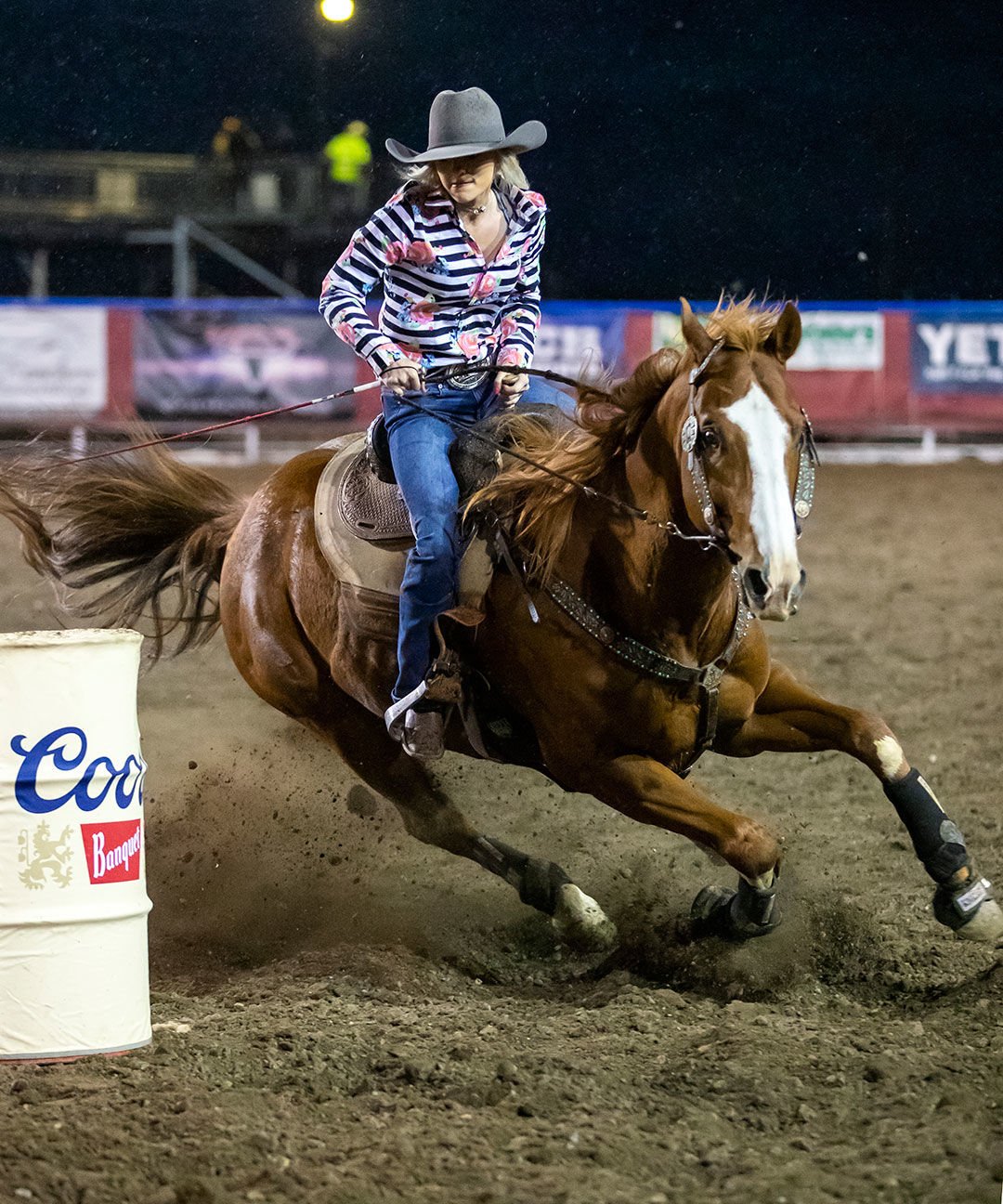 Hadley Tate celebrates winning the barrel racing June 25 during the Cody Nite Rodeo with a time of 17.40.

Hadley Tate turned 18 in May and immediately applied for her pro rodeo card.

No surprise, since she grew up in rodeo, spending 15 summers around Cody Nite Rodeo as her parents, Maury and Nikki Tate, and Mo Betta Rodeo, filled the role of stock contractors.

But when she turned in her form there was one thing written in it that might surprise others.

Instead of listing her hometown as Apache, Okla., where the business is based, she declared Cody as her home.

Many fans definitely cheered when Tate was introduced as a Cody cowgirl July 3 at the Cody Stampede Rodeo barrel racing – a particular thrill for her to be in the night performance, not slack.

Leading up to her ride, Tate said, “I thought I would be more nervous.”

It has been a hectic couple of months for Tate. She graduated from high school, in Oklahoma, obtained her PRCA card, and instead of traveling to Cody for the June 1 start of Cody Nite Rodeo, as she has done every year since she was three years old, she began entering pro rodeos.

She worked her way from Oklahoma, through Nebraska, to Colorado, to Cody, and is competing in other nearby Montana rodeos.

Tate’s breakthrough in barrel racing and breakaway roping – she is contesting both as a touring pro – came in 2018 when she began winning monthly buckle titles and all-around cowgirl championships.

“Last summer was a big, big part of this year,” Tate said.

It was critical to realizing she could compete at a higher level. When she analyzed things she felt her rodeo learning and experience played out in Cody.

“I consider Cody my home,” Tate said. “I put my Wyoming address as my address.”

She said she felt homesick when mom and dad pulled out for Cody Nite Rodeo this year and she was left alone in Oklahoma.

Tate is driving her own horse van, sleeping in the vehicle, accompanied by a pet German Shepherd-Husky mix and a cat. She indulges in Skype with family often.

Tate is going through what most rookies experience.

Tate has to plan her stops and meals, watch the gas gauge, keep an eye on the health of the truck, as well as the animals.

She does now, but not at first.

“It hit me harder than I thought in terms of stressing me out,” Tate said. “It was, ‘Oh, my goodness, it’s not what I thought.’”

After initial stage fright, she began settling into the lifestyle and responsibilities that come with the cowgirl job.

Tate has no illusions things will be easy.

“Working hard is what got me here,” Tate said.

She attended every Stampede rodeo through last year and had no idea if her application for 2019 would get her into prime time.

“I almost cried when I found out I got in,” Tate said.

She thought it was sweet when Jim Facinelli, the Stampede Board member of 49 years, told her, “We have our hometown girl on the 3rd and you’re going to win it.”

That did not happen. If there was any thought of a homefield advantage that did not play out either.

Tate’s time of 18.04 was pedestrian, especially for someone who has ridden much faster many times.

“I sketched myself out,” a disappointed Tate said of allowing the moment to overwhelm her. “I let it get to my head.”

But she did not KO a barrel and did not incur a penalty. And Tate got to compete in the 100th anniversary Cody Stampede Rodeo.

“I’m still super excited to be here,” she said.

And about what comes next. She got caught off guard being recruited to compete for the Southwestern Oklahoma State rodeo team and will enter the school to major in broadcasting and communication Aug. 19.

Another world of rodeo will beckon then.