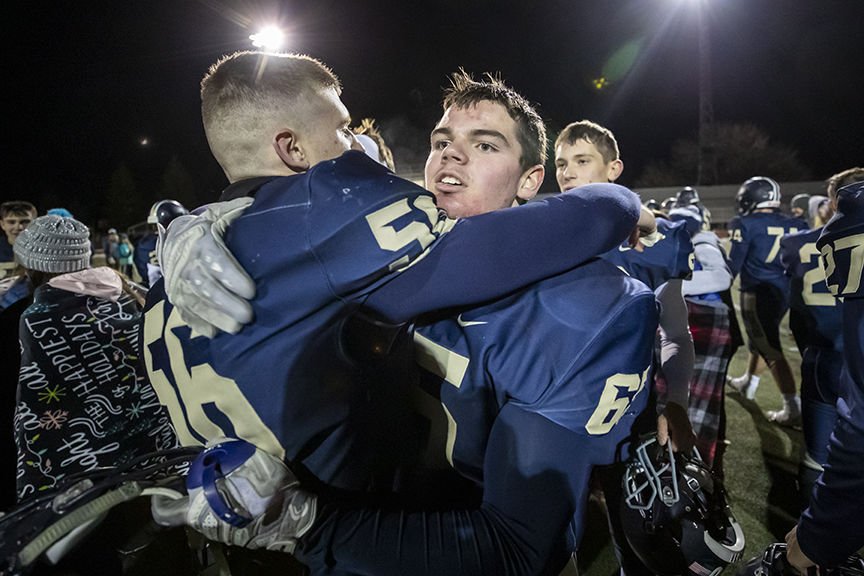 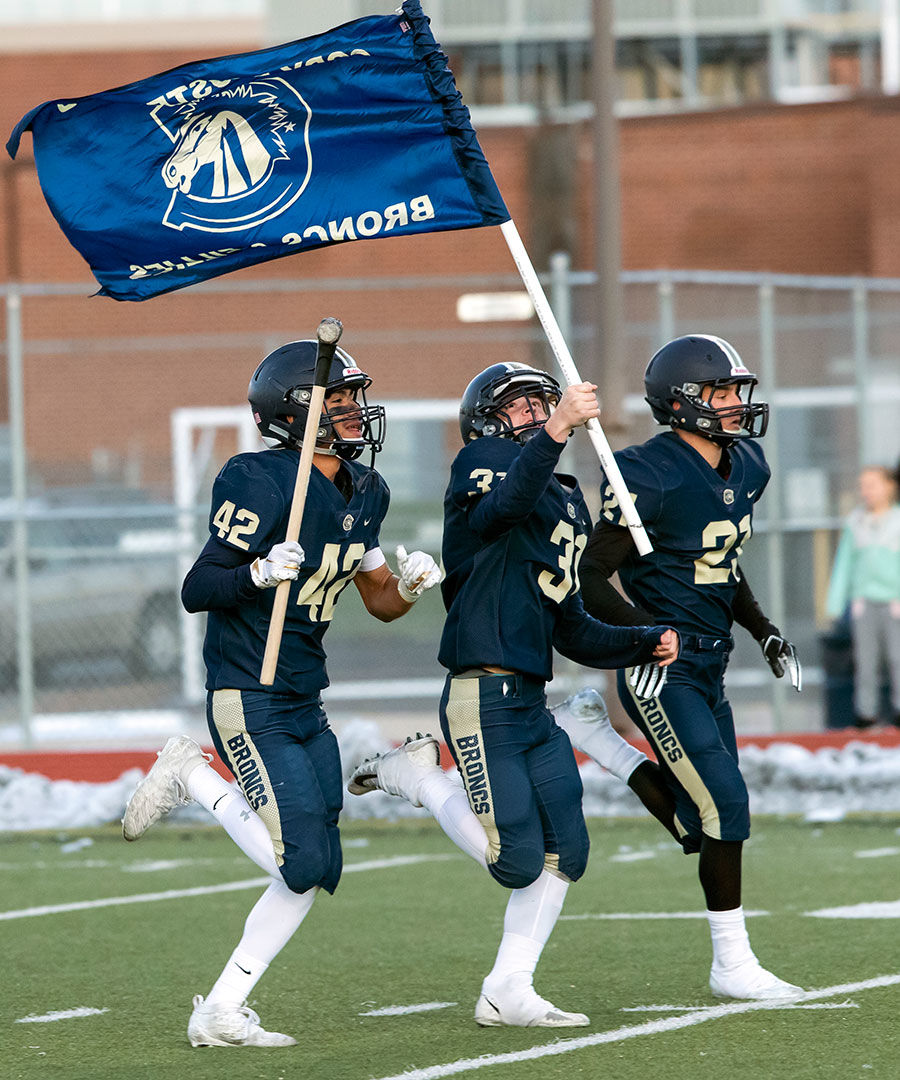 Matt Sandoval (from left), Reese Ward and Daniel Geoghegan head out onto the field Friday before the game against Worland. 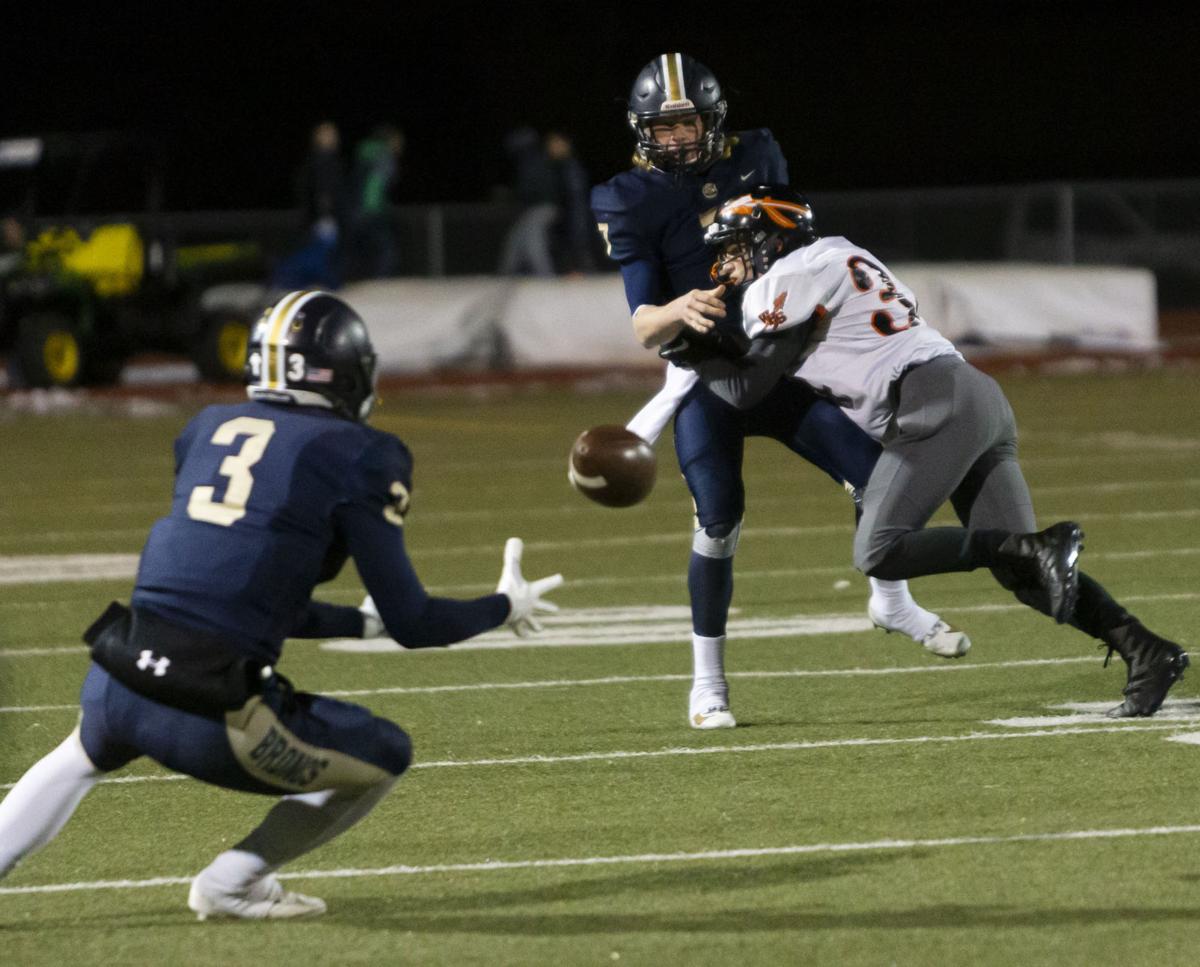 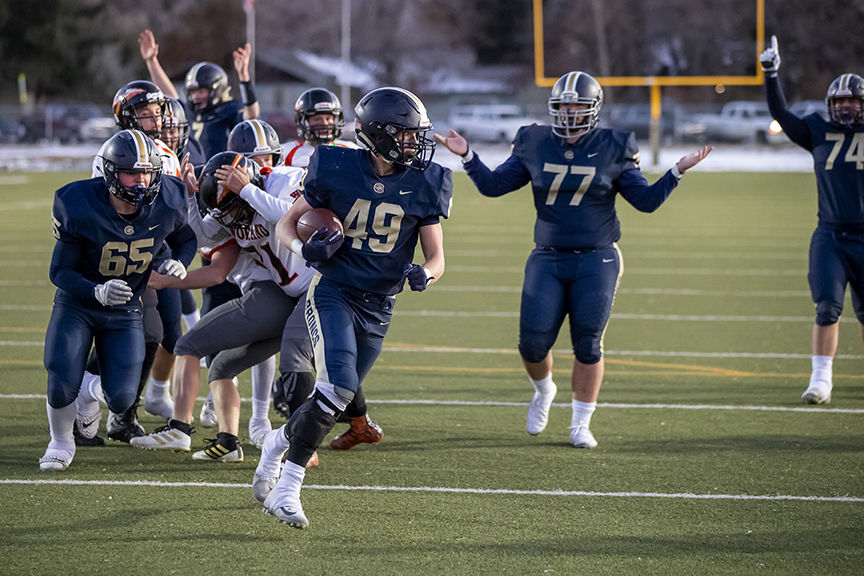 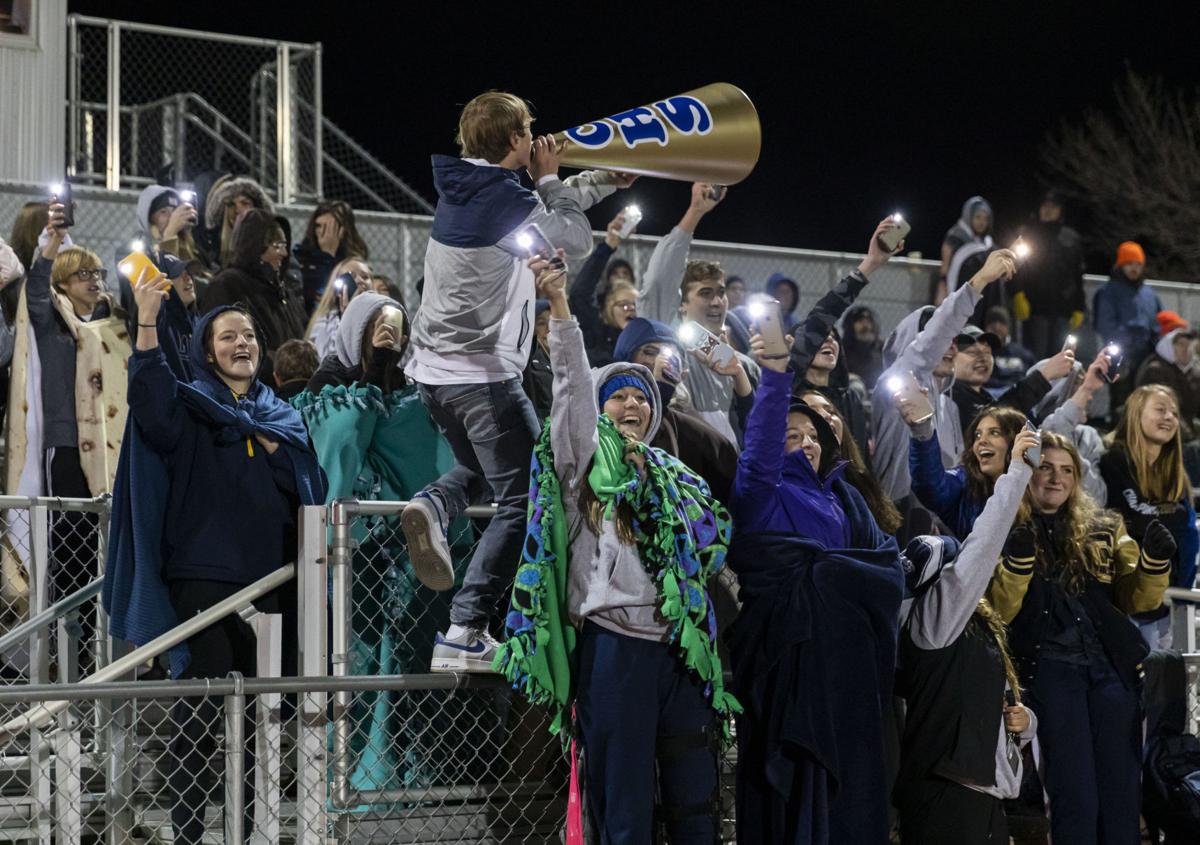 Cody High School students celebrate a victory against Worland in the final moments of the game. 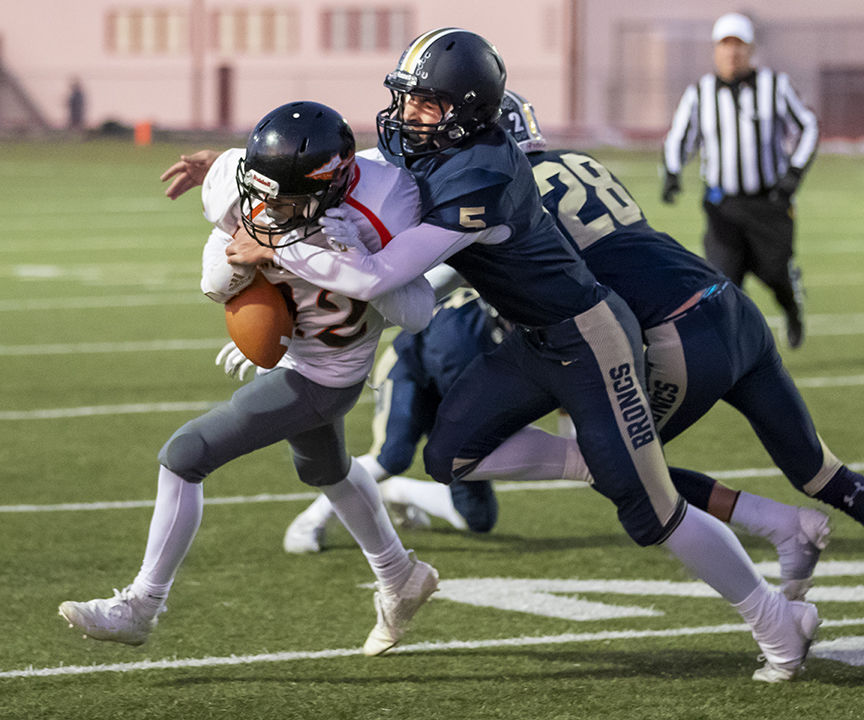 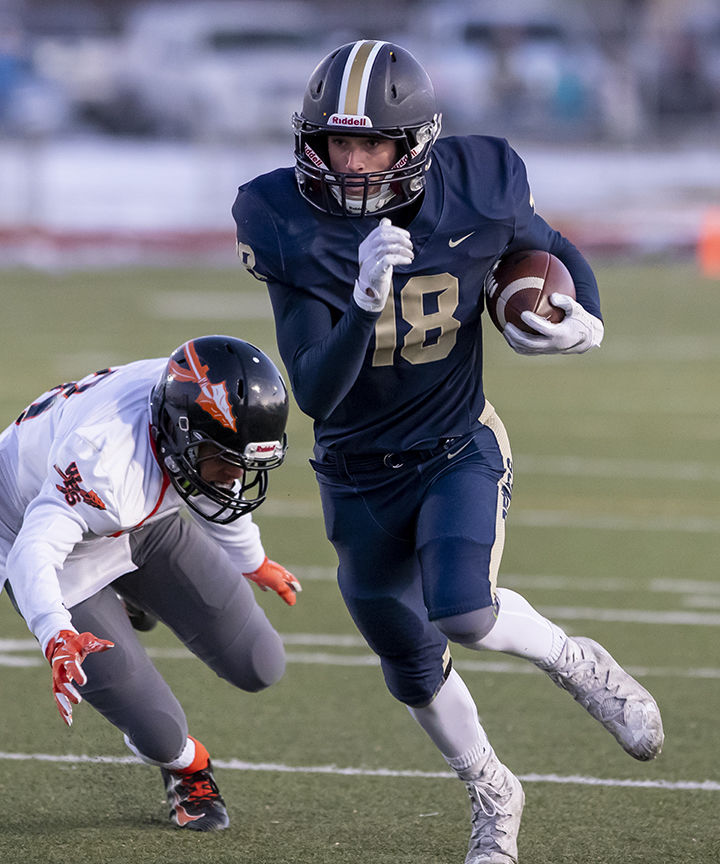 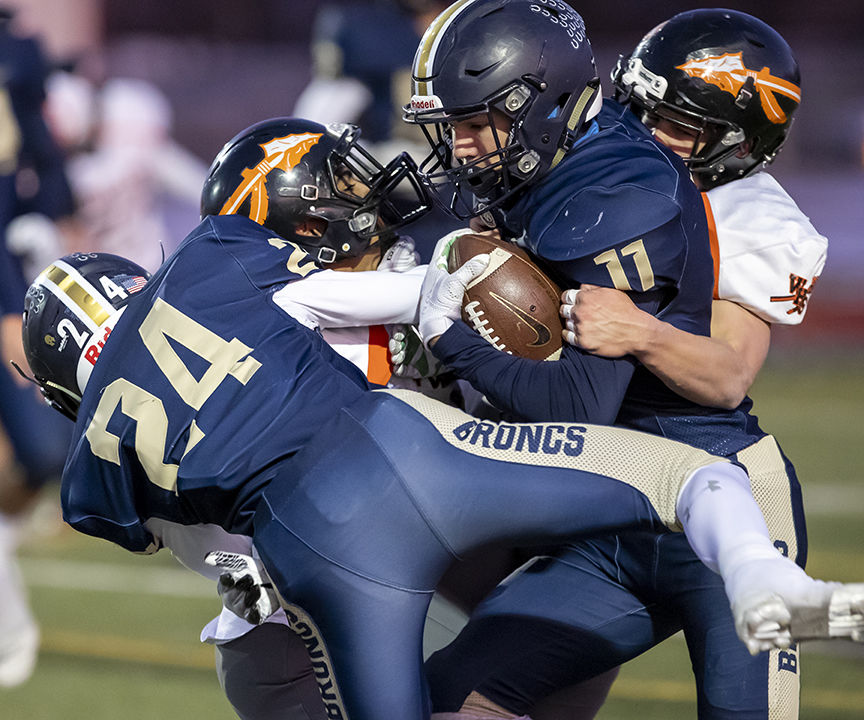 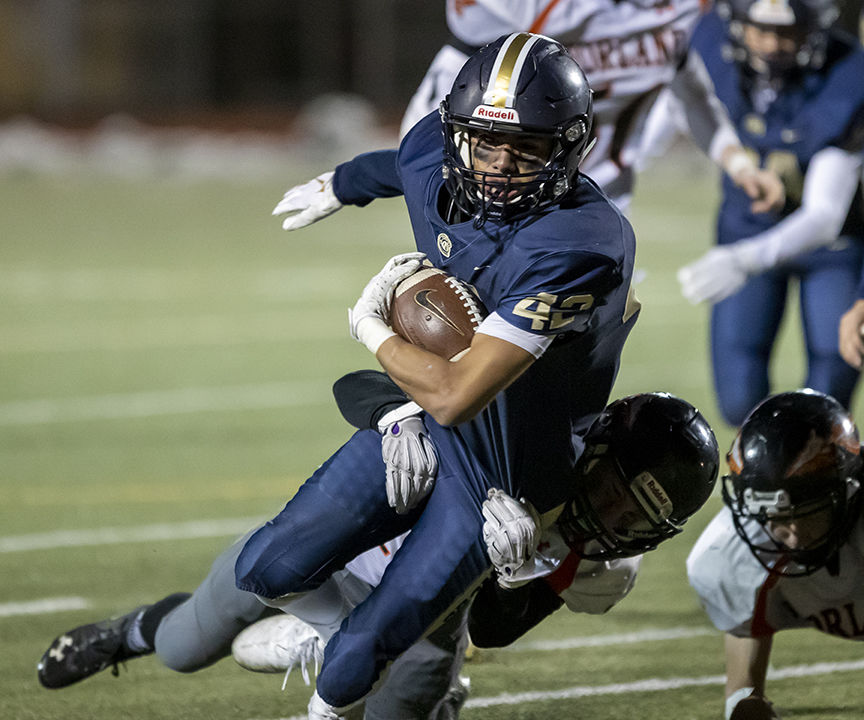 Matt Sandoval is brought down by a Worland defender. 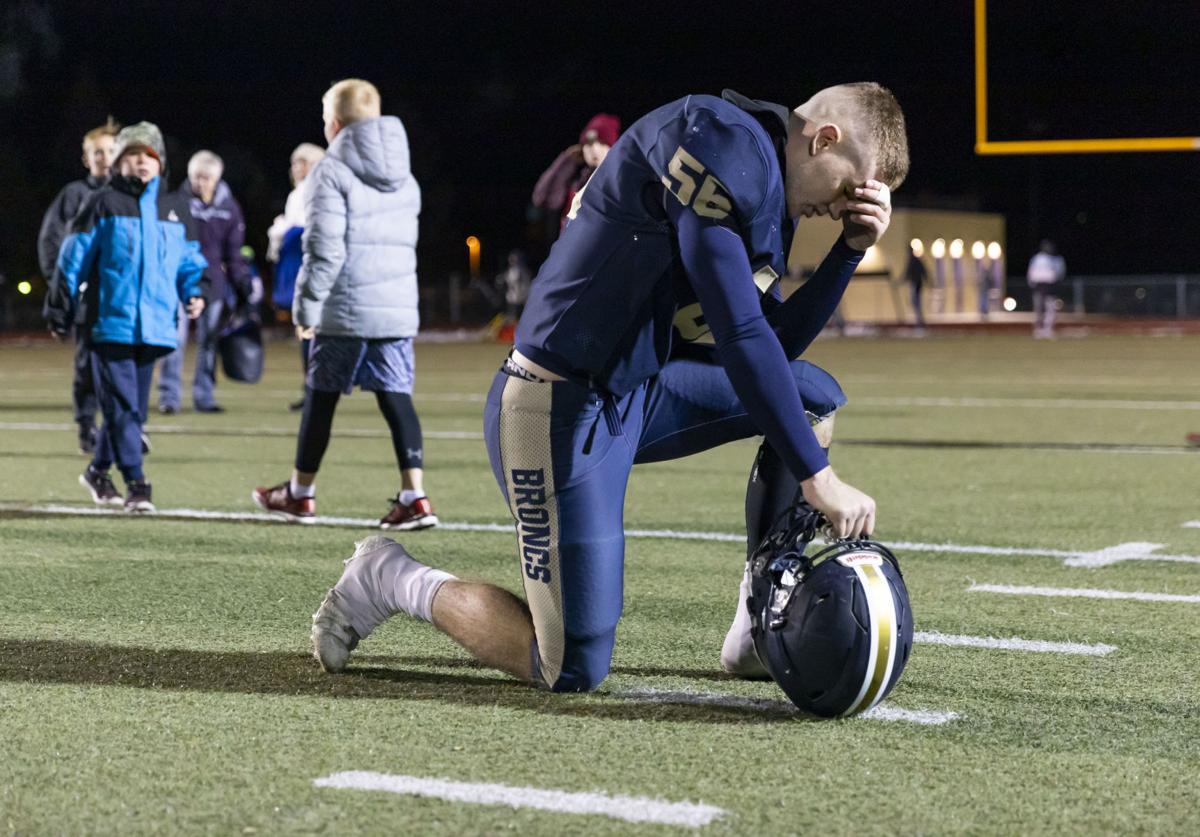 Keith Conner prays on the field after a victory against Worland Friday night.

Matt Sandoval (from left), Reese Ward and Daniel Geoghegan head out onto the field Friday before the game against Worland.

Cody High School students celebrate a victory against Worland in the final moments of the game.

Matt Sandoval is brought down by a Worland defender.

Keith Conner prays on the field after a victory against Worland Friday night.

The Cody football team opened the 3A football playoffs with a statement last Friday.

That statement was offense, as the Broncs beat Worland 55-26 despite chilly conditions at Spike Vannoy Field.

“I came back and ate some oranges and felt good,” he said.

Friday the Broncs take on Powell (5-4) in the 3A semifinals. The Panthers defeated Lander 41-14 in the first round.

“Really impressed with how our O-line and D-line did,” coach Matt McFadden said. “I think they did a terrific job.”

The Broncs forced four turnovers on defense while Keaton Stone led the herd with 7.5 tackles.

Although Worland (3-6) kept the game close with 20 points in the second quarter, Cody blew it open in the third, scoring back-to-back touchdowns to finally put it out of reach.

After committing five fumbles in their win last week against Green River, the Broncs had none on Friday and had no turnovers after throwing an interception early in the first quarter.

“The kids have some pride in it and found they were a little disappointed last week,” McFadden said. “I think they just took it to heart this week.”

But the game had a sloppy start as the teams combined for three turnovers in the first 2:16 of play.

Just 16 seconds in, Blatt intercepted a Worland pass on the first play from scrimmage, but the Warriors quickly returned the favor with a pick of their own.

After Stone recovered a Warriors fumble, the Broncs took a 7-0 lead on their next drive.

It happened when Blatt took a screen pass from Hays 27 yards to the end zone. The score capped off a four-play, 41-yard drive.

On the next possession, Jackson Gail intercepted a Worland pass. Nic Talich ran it in from 4 yards out 29 seconds later and before the first quarter was even halfway done, the Broncs had a 14-0 lead.

The Warriors drove downfield on their next drive but Rudy Sanford threw his third interception when Sandoval caught an errant pass.

He stayed on the field for offense and kept working, bulldozing a 40-yard run to the house.

The score was 20-0 after Cody failed to convert on a fake kick pass attempt at 2:05 in the first.

After a dominating first the Broncs gave way to back and forth football in the second.

At 9:58, Luke Mortimer found a hole in the Cody defense and rushed 64 yards for a score. After the Warriors missed the PAT it was 20-6.

On the ensuing kickoff, Mortimer made a cut along the sideline and ran it back 80 yards to keep it a two-touchdown game.

But the Warriors weren’t checked out for the half just yet. They pushed all the way down the field and scored just 1:17 later on a 14-yard TD reception to Jorey Anderson.

By halftime Cody had already scored more points than its previous two games combined, but it was also the most the defense had given up all season in one half. The defense reversed course in the second, keeping Worland scoreless until the last minute of the game.

The Broncs wasted no time getting started in the third as Talich finished off a long drive at 9:15 with a 9-yard rushing TD to make it 41-20.

The Broncs struck again in the third, but this time through the air at 3:43, as Blatt hauled in his second TD. Quarterback Hunter Hays found him with a perfectly placed 48-yard crossing route as Blatt saw nothing but green field ahead once beating the cornerback.

Blatt’s two best games have come against Worland this season.

“Must be something about him and Worland, I don’t know,” McFadden said with a chuckle.

Blatt said it’s a rivalry that transcends across different sports.

“I know a lot of their guys, we’ve been playing basketball with them since we were young,” he said. “They’re fun to compete against.”

Although homecoming was on Sept. 27 the Broncs did welcome back three injured teammates to the field as Hayden Bronnenberg, Paul Lovera and Charlie Beaudrie all saw playing time after each were out for the last six weeks.

“It’s just nice to see them on the sidelines, see them in the locker room,” McFadden said. “See their smiles.”

Smiling they were, along with their fellow Broncs raucously singing along to Lovera’s music in the locker room following the win.

“It’s our favorite,” Bronnenberg said with a laugh, recently recovered from a tear to his MCL, ACL and meniscus.

Beaudrie didn’t see the ball until the fourth quarter but did run in a 5-yard score with 6:40 remaining to push the Broncs passed the half-century mark for the first time this season.

The semifinal game is a rematch of the Big Horn Brawl that Cody won 38-14 as the teams compete for a trip to Laramie and the state championship. It will be the first time these teams meet in the playoffs since the 2013 semifinals, when the Panthers knocked off the Broncs before winning a championship.

Kickoff will be 6 p.m. Friday at Spike Vannoy Field.