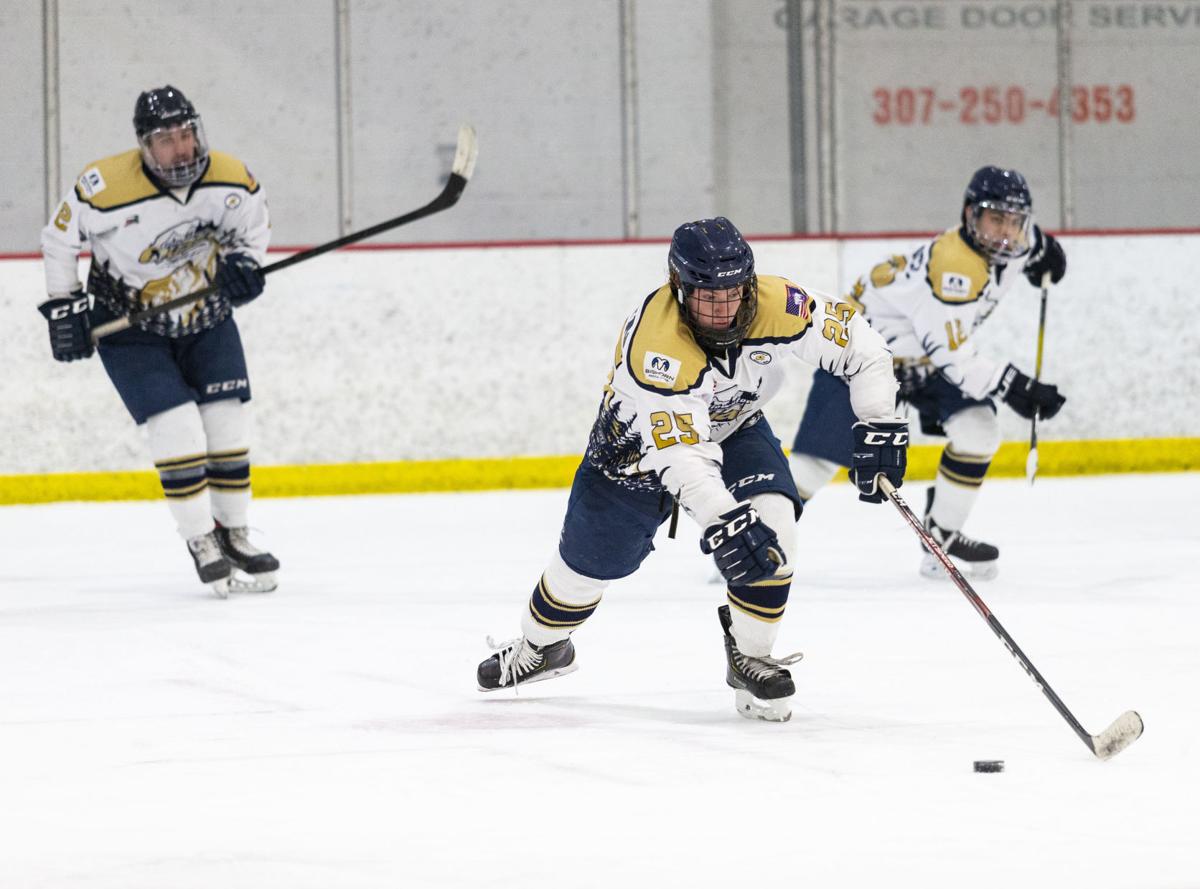 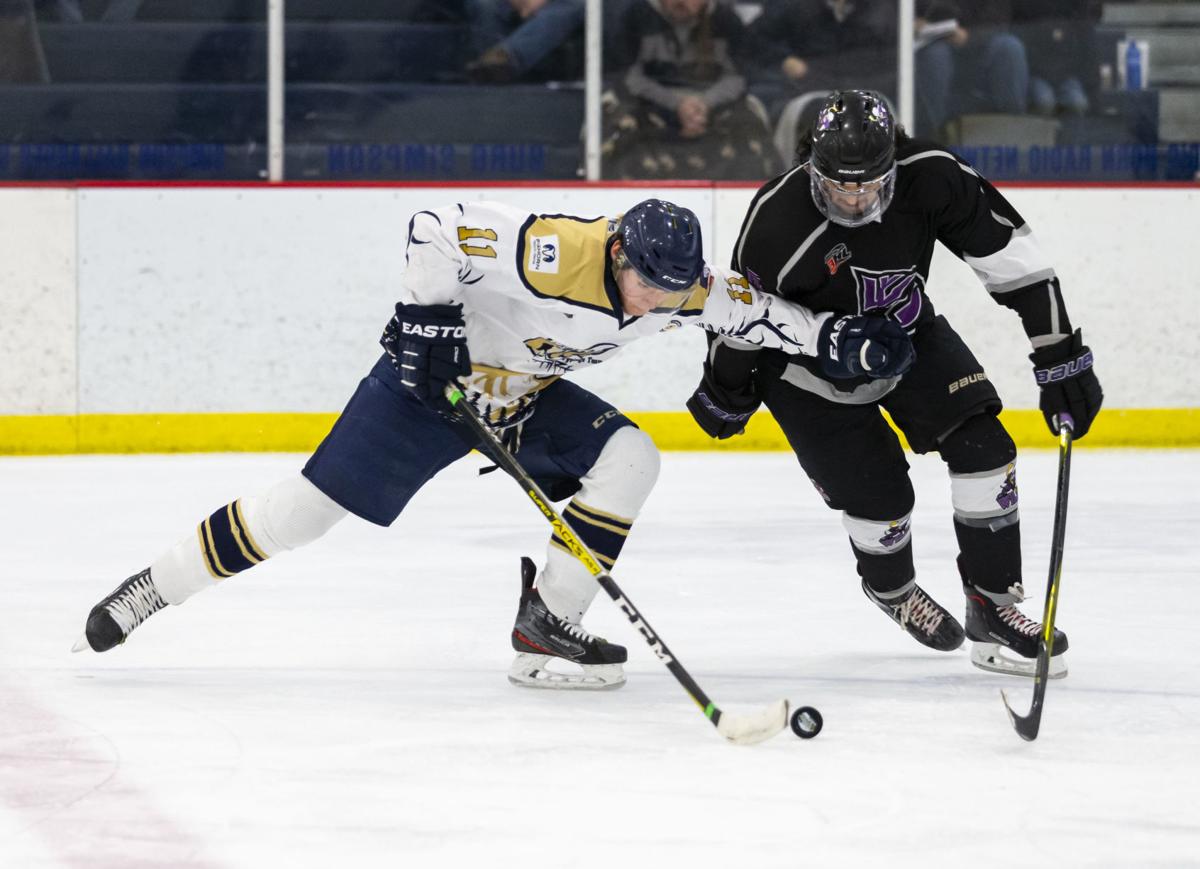 Kirwin Johnson battles for the puck against a Gillette defender Friday, February 28th at Riley Arena. 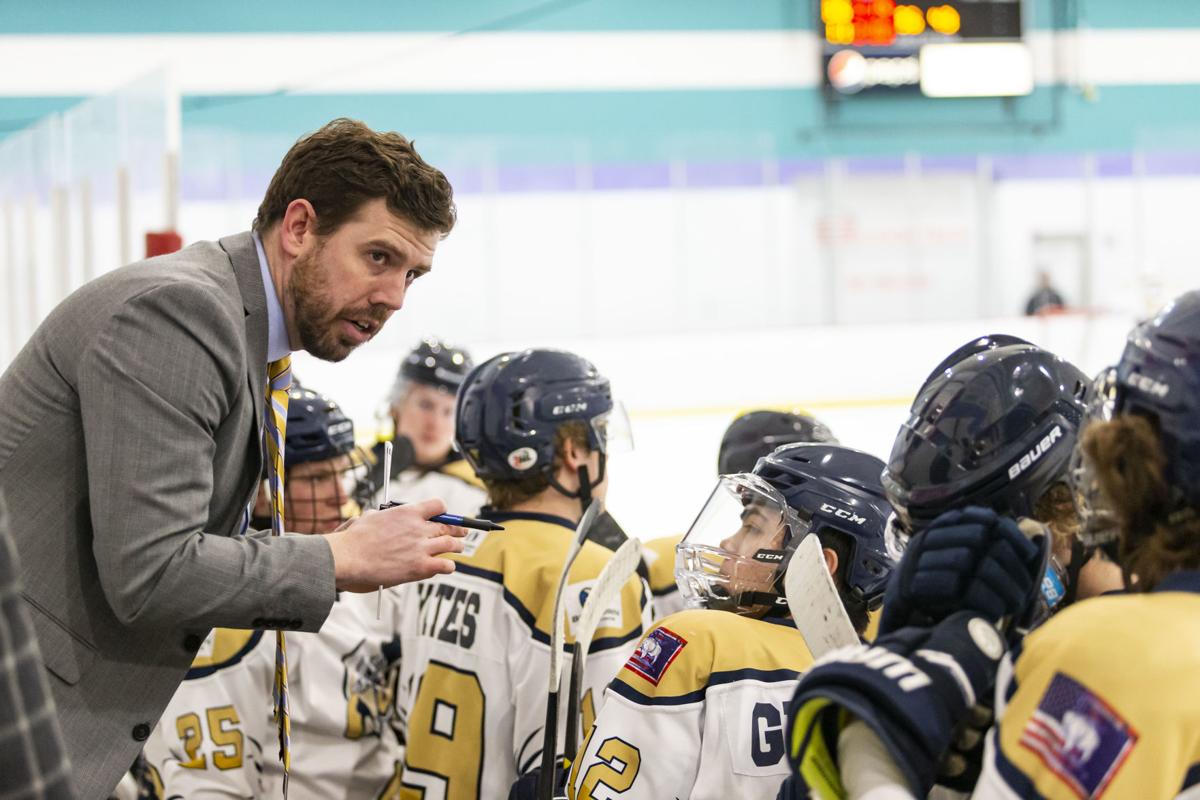 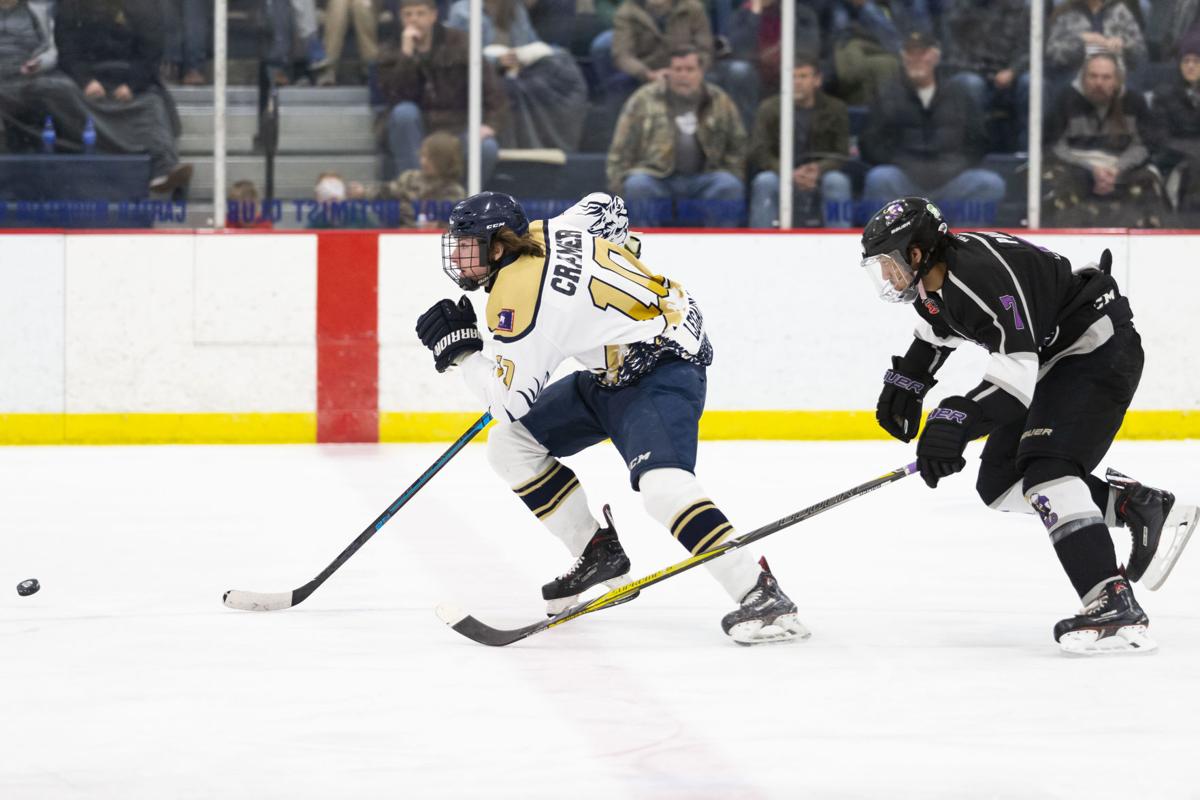 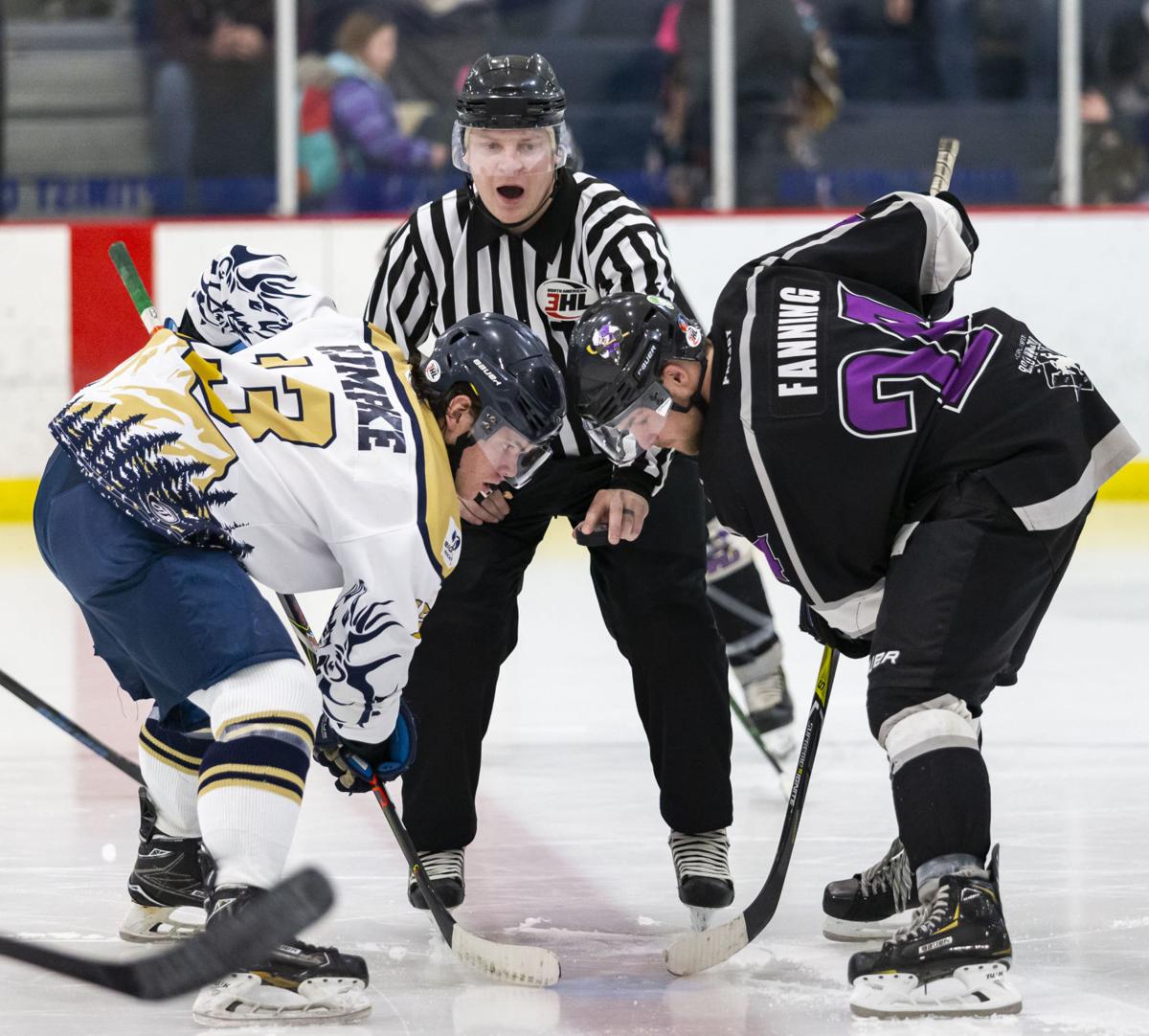 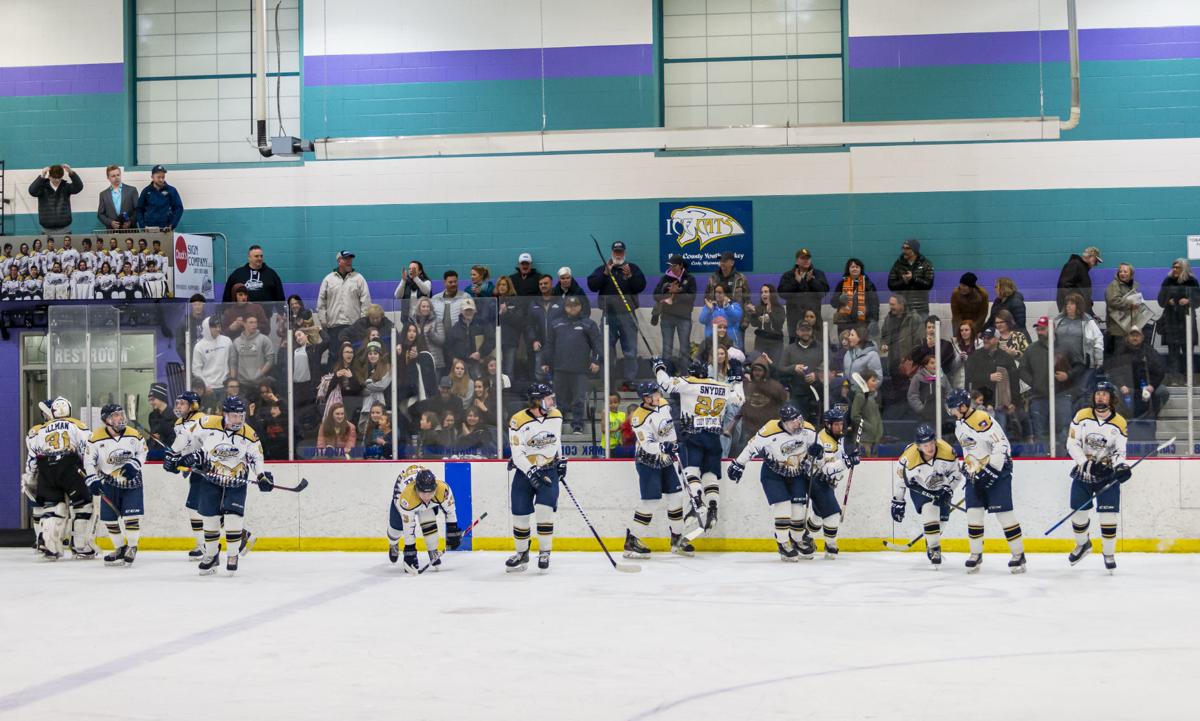 Kirwin Johnson battles for the puck against a Gillette defender Friday, February 28th at Riley Arena.

The Yellowstone Quake flexed some offensive muscle Friday while weathering a late rally from Gillette in a 8-5 win at Riley Arena to clinch the No. 4 seed and some ice advantage to start the postseason.

Yellowstone opens tournament play 7 p.m. Thursday in Gillette. The Quake play 7:30 p.m. Friday at home and Saturday at home if needed in the best of three series.

An offensive surge in the first and second quarters by the Quake (19-25-2) Friday put the team in a strong position with a 7-0 advantage, but after Gillette (20-27-0) scored five straight it was the players’ ability to defeat 5-on-4 and 5-on-3 power plays late in the final period that proved the difference.

“The 5-on-3 penalty kills late in the game were huge,” coach Phil Oberlin said. “We had more blocked shots when we were down than we had the whole game. It was ugly, but we got the win.”

Forward Dylan Rumpke capped a sterling night with an open-net goal in the final minute to seal the win and secure a hat trick on the night, courtesy of a pass from Jack Harris.

Jon Green added a pair of goals to help lead the way, as multiple players stepped up on defense to stem the Gillette rally.

“We stayed tight,” said Green, who added the team had found itself in man-down situations in many games this season.

“Unfortunately we’ve had a lot, but we’ve killed off a lot,” he said.

Before they were killing Gillette power play opportunities, the Quake players were taking advantage of their own.

Green deflected in the puck for the first goal less than two minutes in on a shot by Logan Brown. Brock Risdon also had an assist on the play.

Midway through the first period, Yellowstone took advantage of a second power play when Will Yates slipped the puck in the net from just in front on assists from Spencer Platt and Rumpke.

The Wild put pressure on the Quake later in the period, but the defensemen clamped down and goalie Michael Allman made a couple of saves when Gillette forwards broke through.

The Quake finished the opening period by successfully defending on Gillette’s first power play of the night and killed it early in the second.

After spending nearly the first half of the second period beating back Gillette attacks, Yellowstone unleashed a flurry of goals, scoring five in under seven minutes to take a commanding 7-0 lead. That stretch included a one-timer by Harris (Rumpke and Seth Bennett assist), slapshot by Rumpke for a third power play goal (assists by Harris and Platt), Green score (assists by Brown and Risdon), Rumpke goal (assist by Harris and Tyler Cramer), and a long shot from near the blue line by Will Sobaski off a Mason Merager pass.

“We were just buzzing, we had an energy on the bench, we were ready to go,” Rumpke said.

The Gillette offense broke through in the last few minutes of the period to cut the lead to 7-2 on goals by Keedin Denny (Mason Hoffman and Devon Dunn assists) and Declan Young (Denny assist).

The Wild scored three more times in the fourth and spent much of the final 10 minutes with a one or two man advantage due to Gillette power plays.

After defeating a 5-on-3 and 5-on-4, Quake sealed the win with the open net score.

“Once we killed off all the 5-on-3s the guys were buzzing again,” Rumpke said. “We got our mojo back.”

During the game the Quake also started its 15th anniversary celebration of the program by having fans vote for the home jersey anniversary design. The team will give away a jersey from the winning design group, and at the end of the 2020-2021 season the players will sign their jerseys and auction them off.

The next day the Quake lost a close one to the Wild at Riley Arena to end the regular season.

Green and Risdon scored for Yellowstone, Kirwin Johnson had two assists and Evan Snyder and Sobaski had one each.