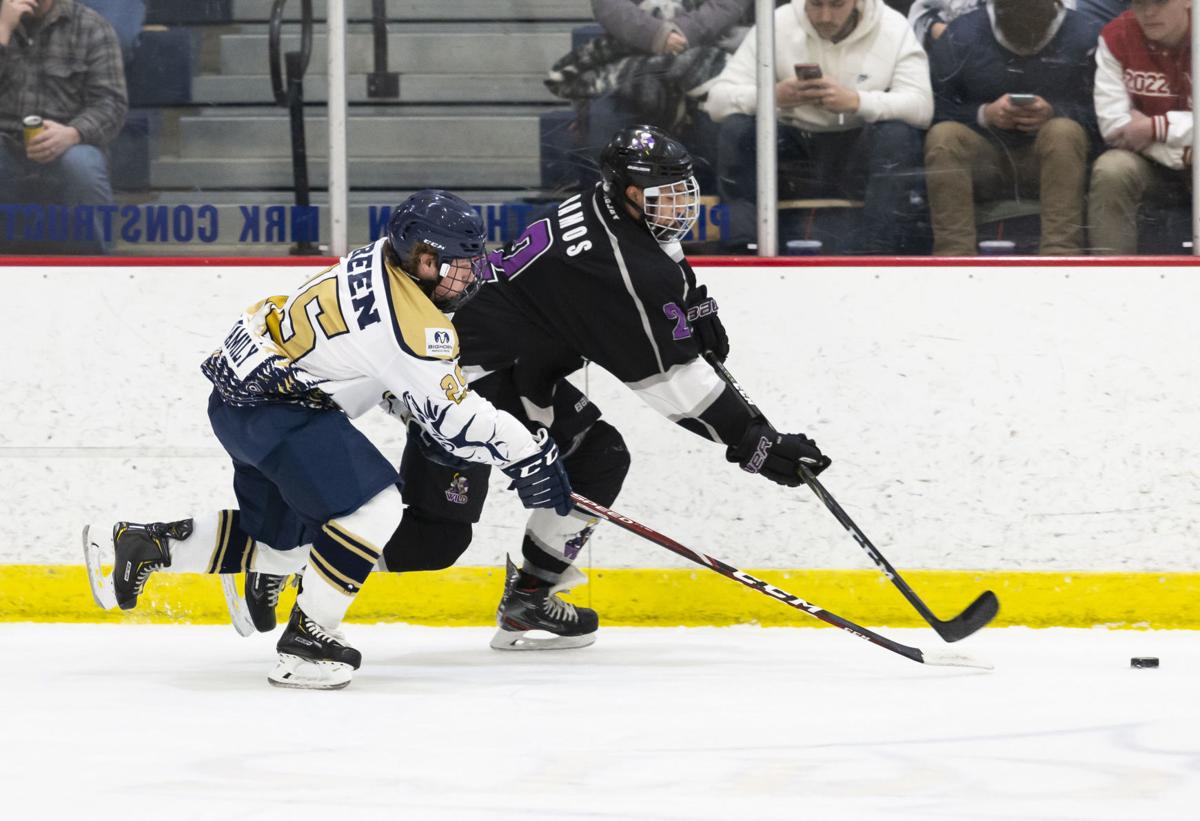 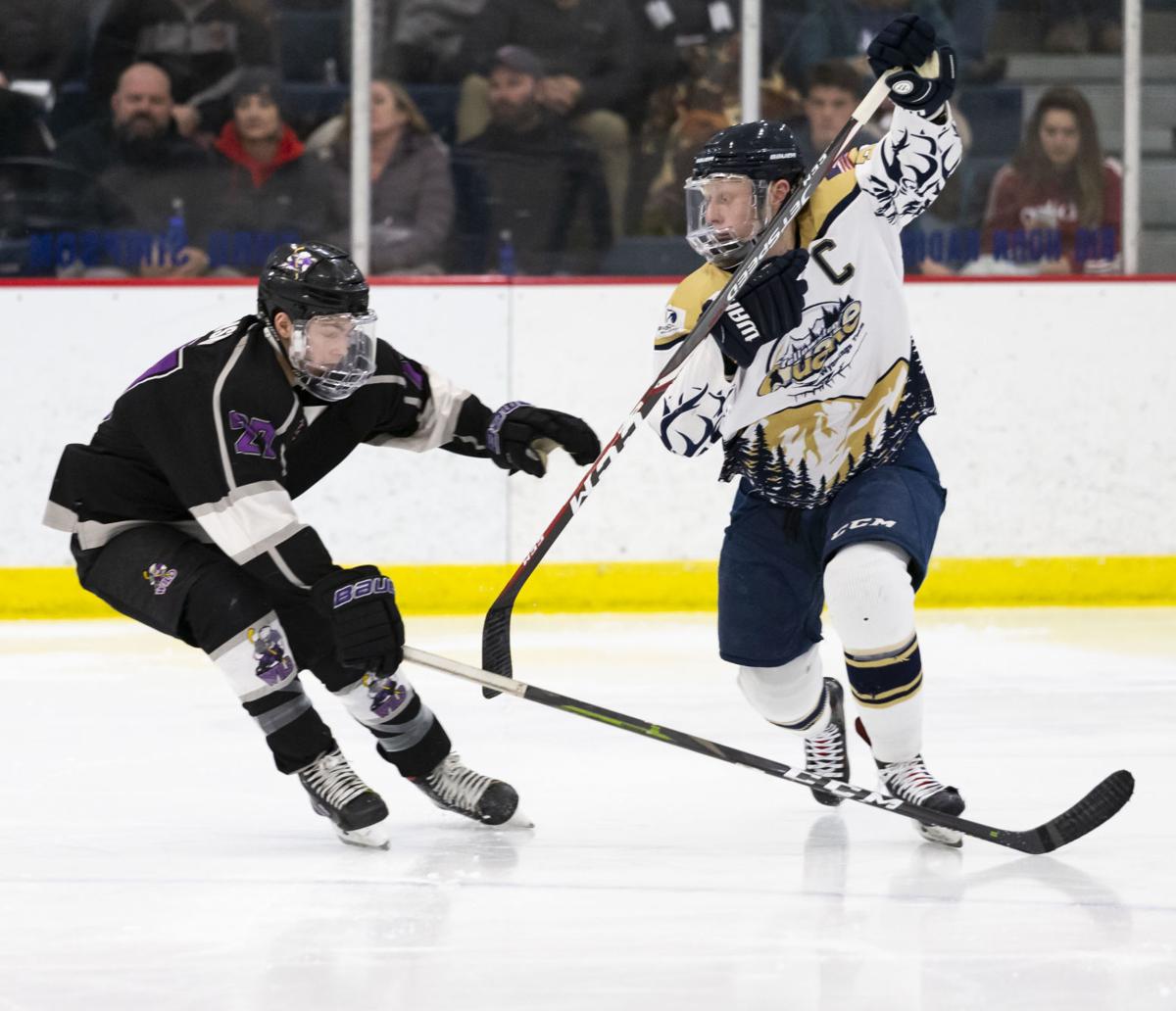 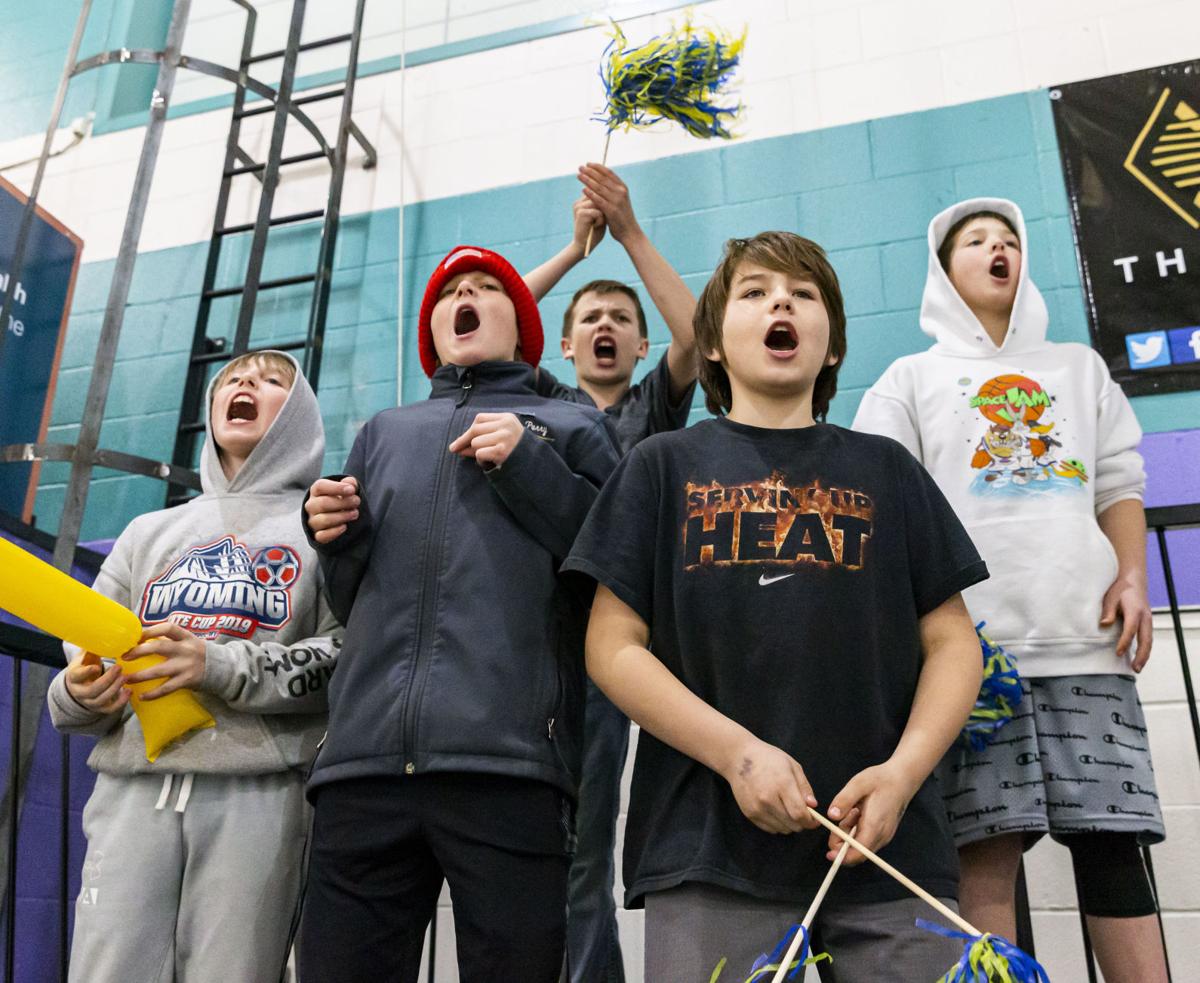 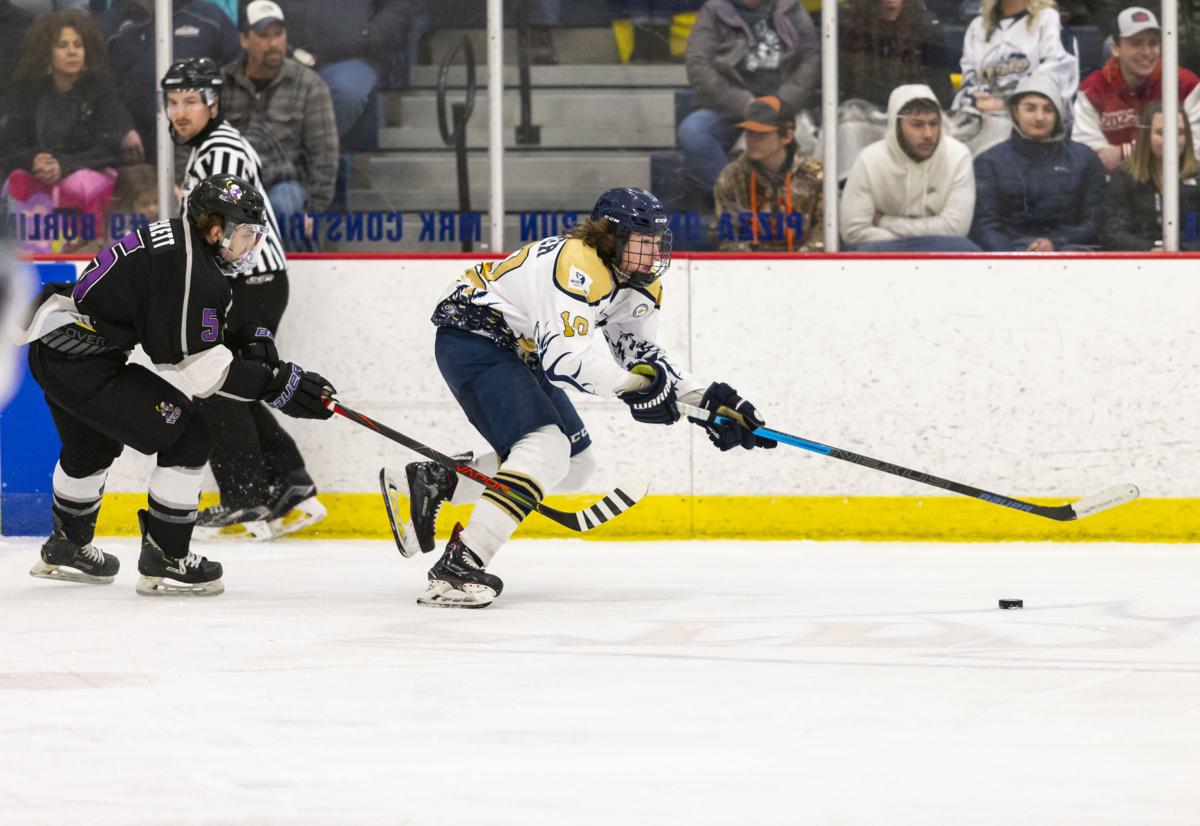 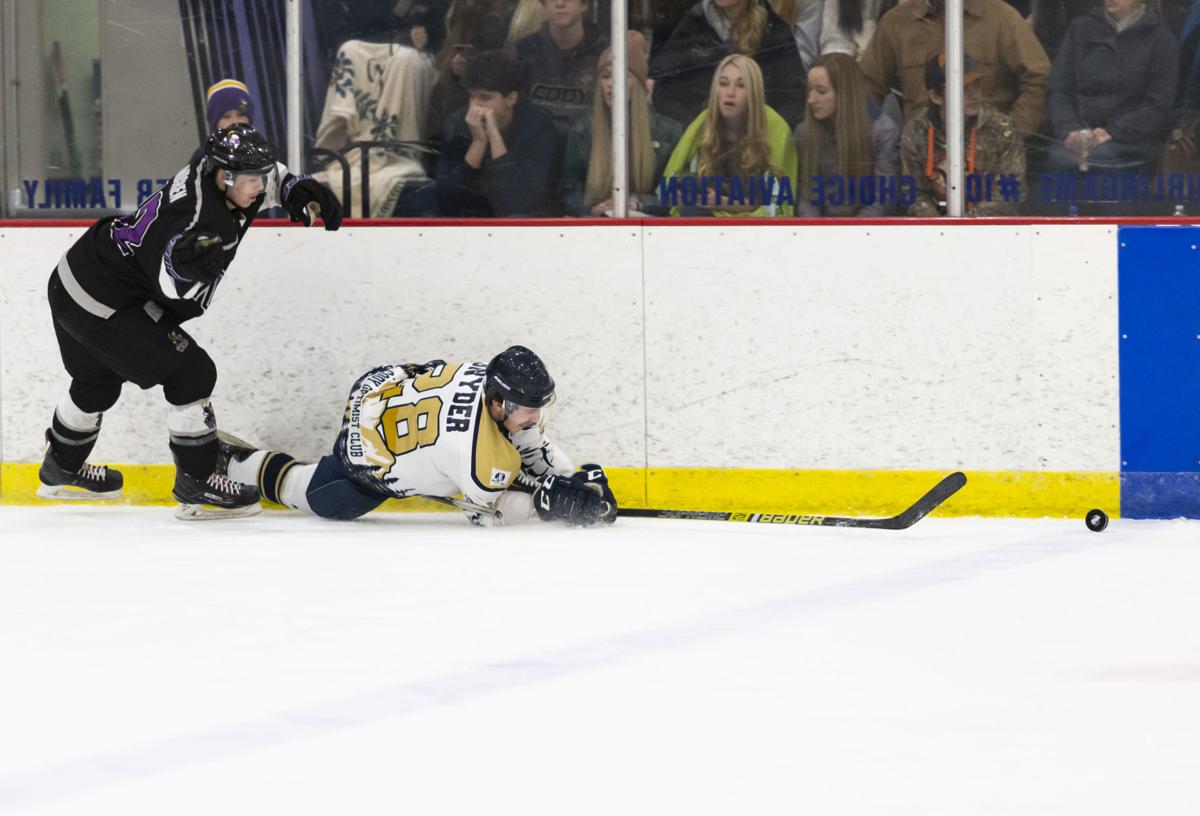 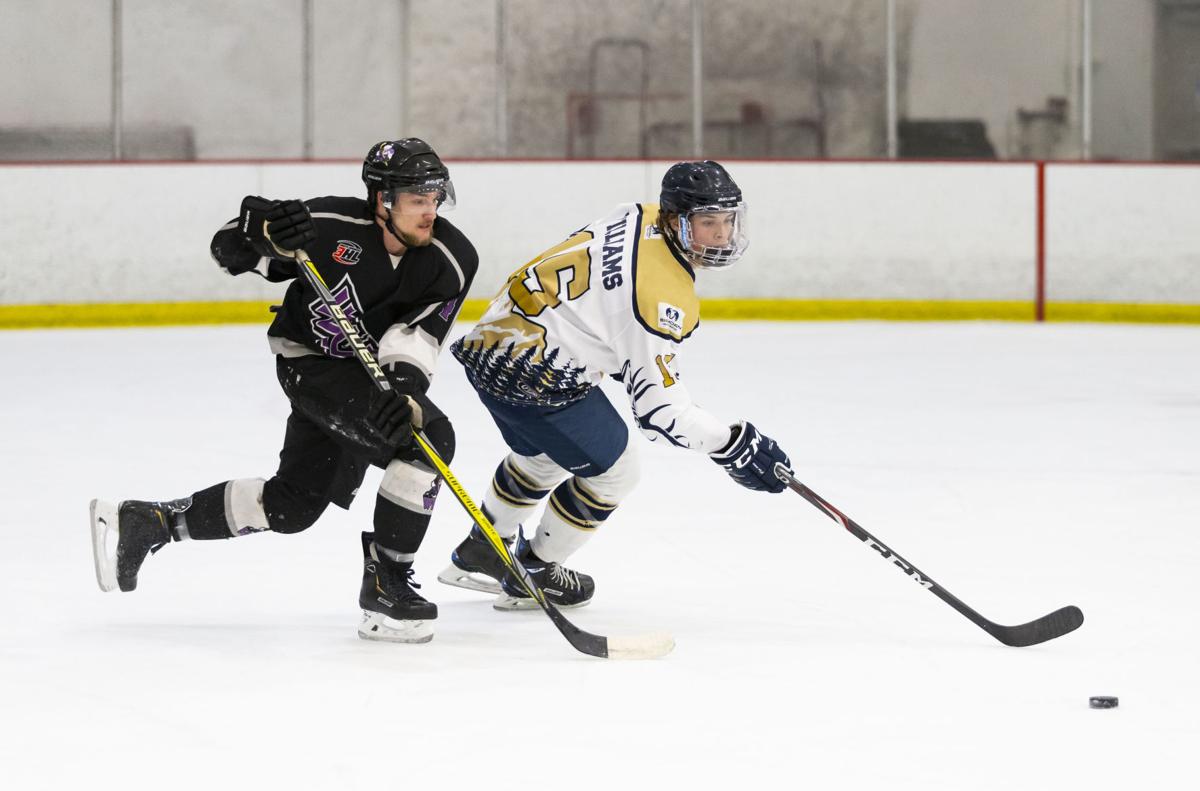 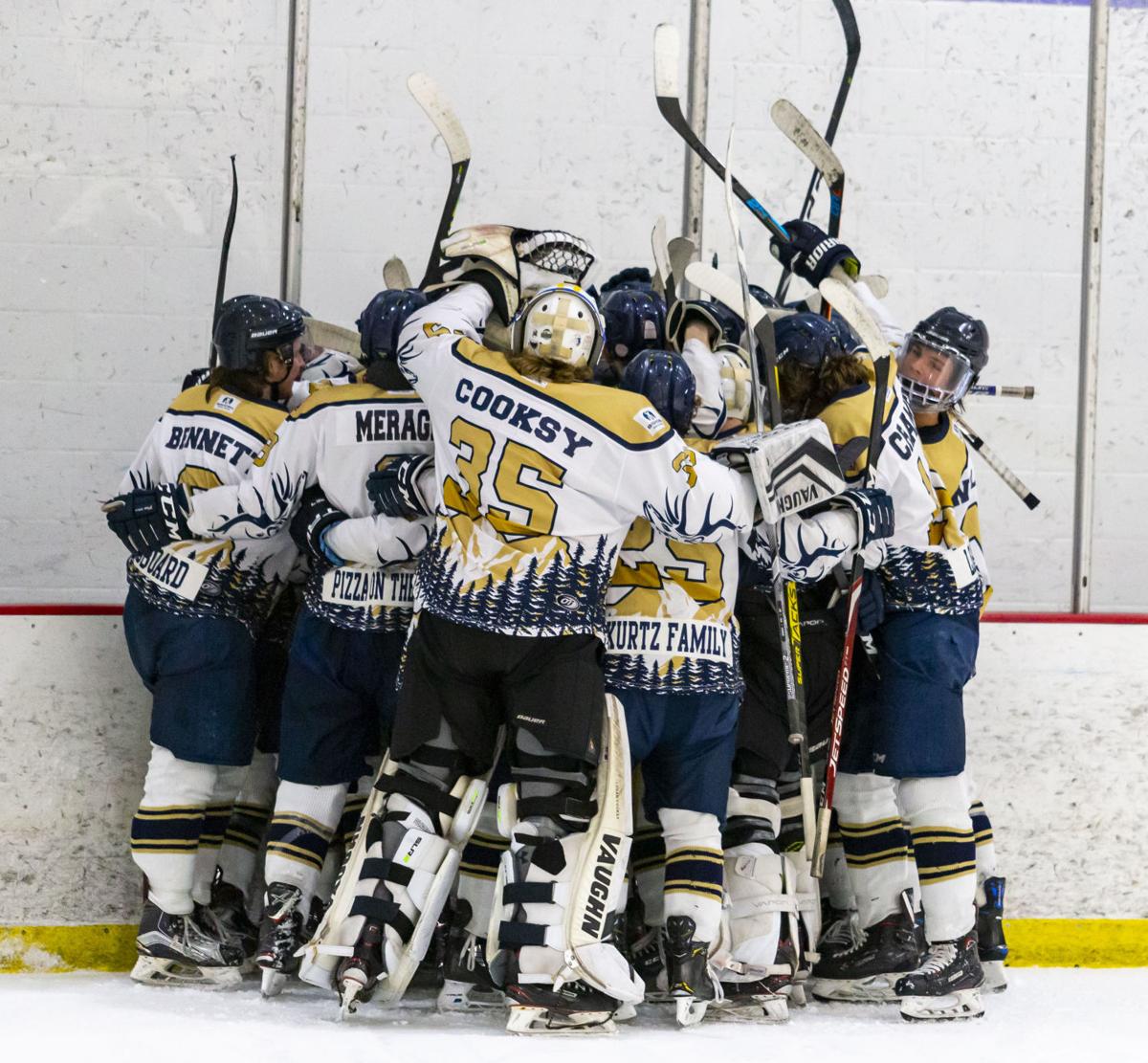 Quake celebrates a 4-3 victory over Gillette in sudden-death overtime advancing them to the second round of the North American 3HL tournament. 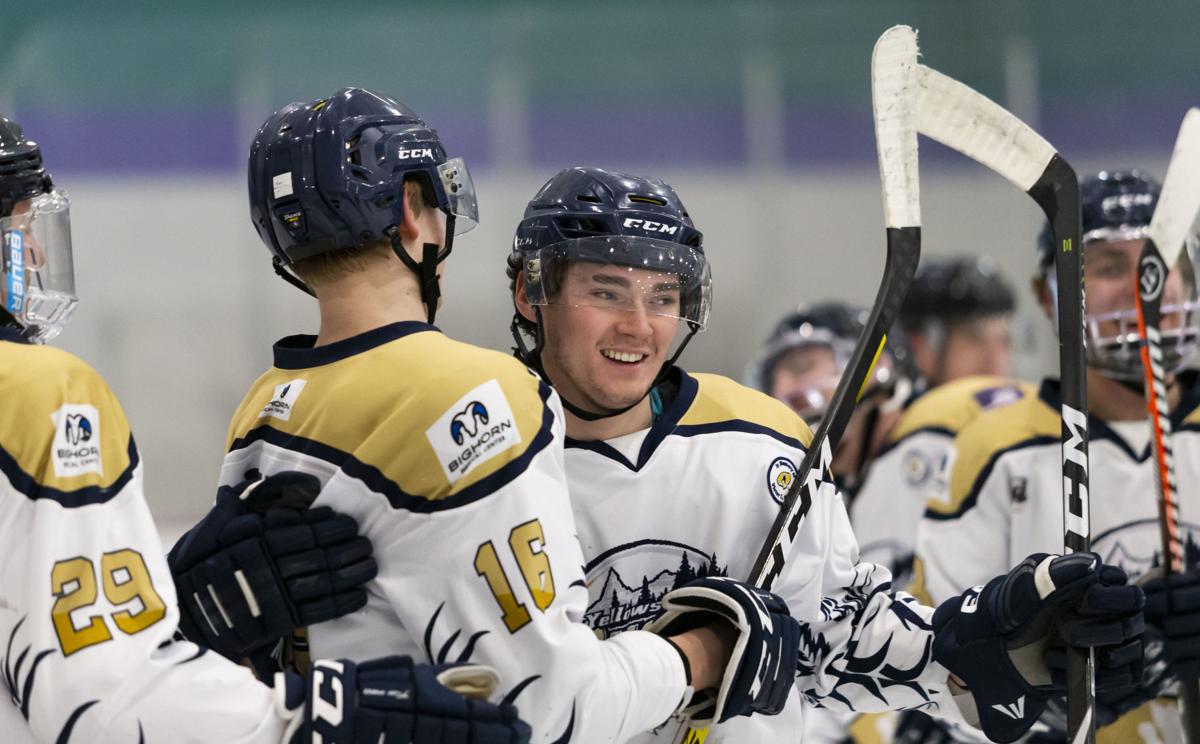 Cade Rosansky and Kirwin Johnson celebrate a 4-3 victory over Gillette in sudden-death overtime advancing them to the second round of the North American 3HL tournament.

Quake celebrates a 4-3 victory over Gillette in sudden-death overtime advancing them to the second round of the North American 3HL tournament.

Cade Rosansky and Kirwin Johnson celebrate a 4-3 victory over Gillette in sudden-death overtime advancing them to the second round of the North American 3HL tournament.

Yellowstone Quake coach Phil Oberlin watched a film Friday on the success of 6-on-5 advantages when NHL teams pull their goalies in a final attempt to tie a game late.

The strategy is only effective roughly 4% of the time at the pro level.

The Yellowstone Quake players defied the odds. With 43 seconds and an extra skater on offense, center Dylan Rumpke dumped in a deflection off of Gillette goalie Luc Haggit to tie the game and send it to a 20-minute sudden death overtime, which the Quake won 4-3.

Yellowstone will play Bozeman in the second round. The series starts Friday at Riley Arena before finishing in Montana.

Rumpke said he’d been on a team that had successfully scored after pulling its goalie, but it had been awhile.

“It’s very rare,” he said. The fact that we pulled it off and won in overtime, it helps give us confidence going into the second round.”

Oberlin didn’t want to give up that momentum during the 20-minute intermission prior to OT.

The winning goal against Gillette came nearly halfway through the first 20-minute overtime period on a pass from Cade Rosansky that split two defenders and found Will Yates, who one-timed a shot into the net.

“I was going to make a move and then I saw Will out of the corner of my eye,” Rosansky said. “So I tried to make the pass through the defenders. As soon as I saw it get through I said, ‘that’s going in.’”

Quake goalie Michael Allman was key to the victory, saving 67 of 70 shots on goal.

Gillette put pressure on the Quake defense and pressured Allman much of the night, including during most of the game’s first 10 minutes, breaking through with the first period’s only goal at 12:59 when forward Declan Young knocked in the puck after Allman had deflected a shot with his glove.

Yellowstone recovered, beating a two-minute Wild power play and taking the offensive through most of the second half of the period. They didn’t score, but the Quake players ended the first with a 17-13 shot advantage and started a two-minute power play with just 12 seconds in the period, taking a key advantage to the second.

Quake was once again on the defensive for much of the second period, as Gillette racked up 24 shots on goal in the second to 12 for Yellowstone.

Yet it was the Quake players who took advantage of a power play to tie the game at 1-1 with 7:35 remaining in the second. After Spencer Platt dumped the puck near the net, Rosansky fired a shot at the goalie, who deflected it back out, where Rumpke pushed it past Haggit for the score.

Yellowstone killed another two-minute penalty late in the second and, like the first, finished the second period in the midst of a power play.

The third period saw more goals than the other two combined. Gillette scored early at 15:5 on a one-timer breakaway to take a 2-1 lead.

The Quake took advantage of a five-on-four soon after, as Harris took a pass and fire in a long slapshot to tie the score at 2 all with 14:27 remaining.

Gillette retook the lead with 13:35 remaining on a shot by George Stilson after intercepting a Quake defensive pass.

Quake had a power play late in the third but couldn’t take advantage, and then killed a power play with 1:30 remaining. At that point Oberlin pulled Allman for the 6-5 skater advantage, the low-percentage strategy that this time paid off.

The victory game after the Quake won 4-1 on Thursday night in Gillette.

Forward Jack Harris led the way with two goals, while Ethan Gicewiez and Yates also scored as Yellowstone built a 3-0 lead through the first two periods.