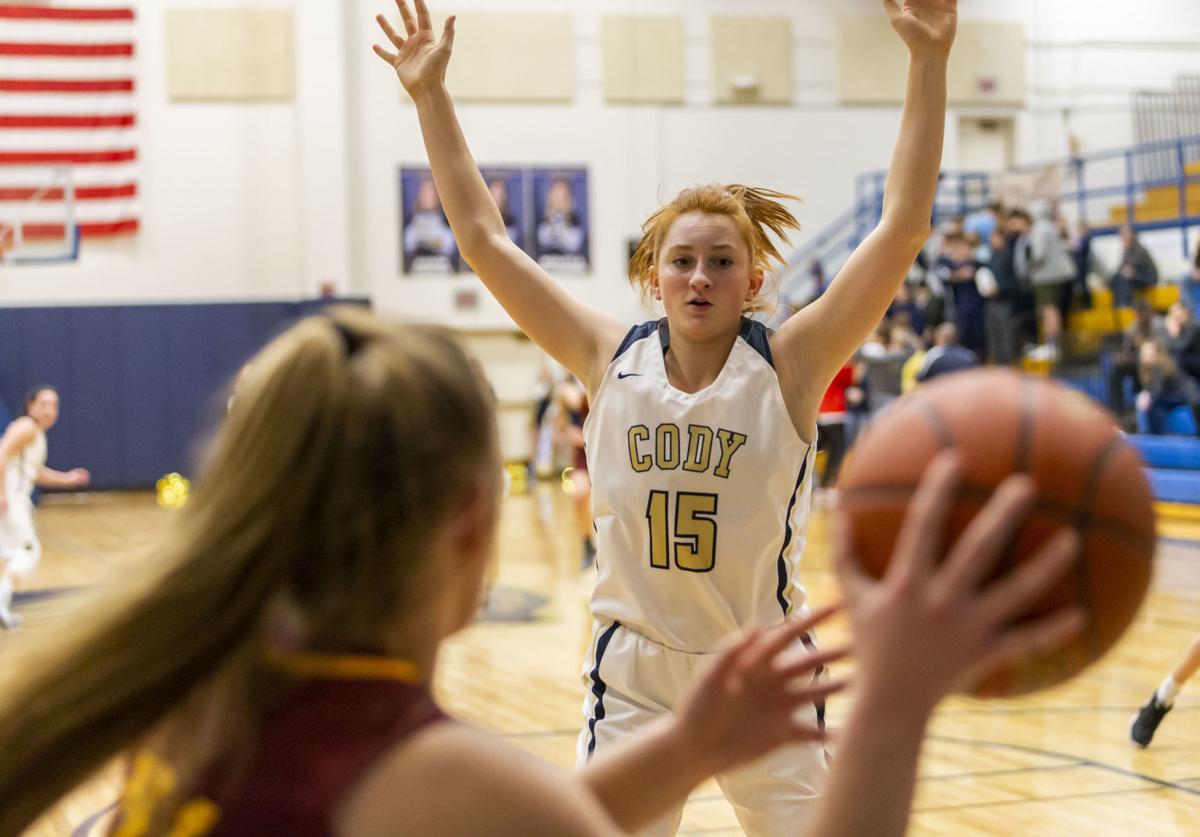 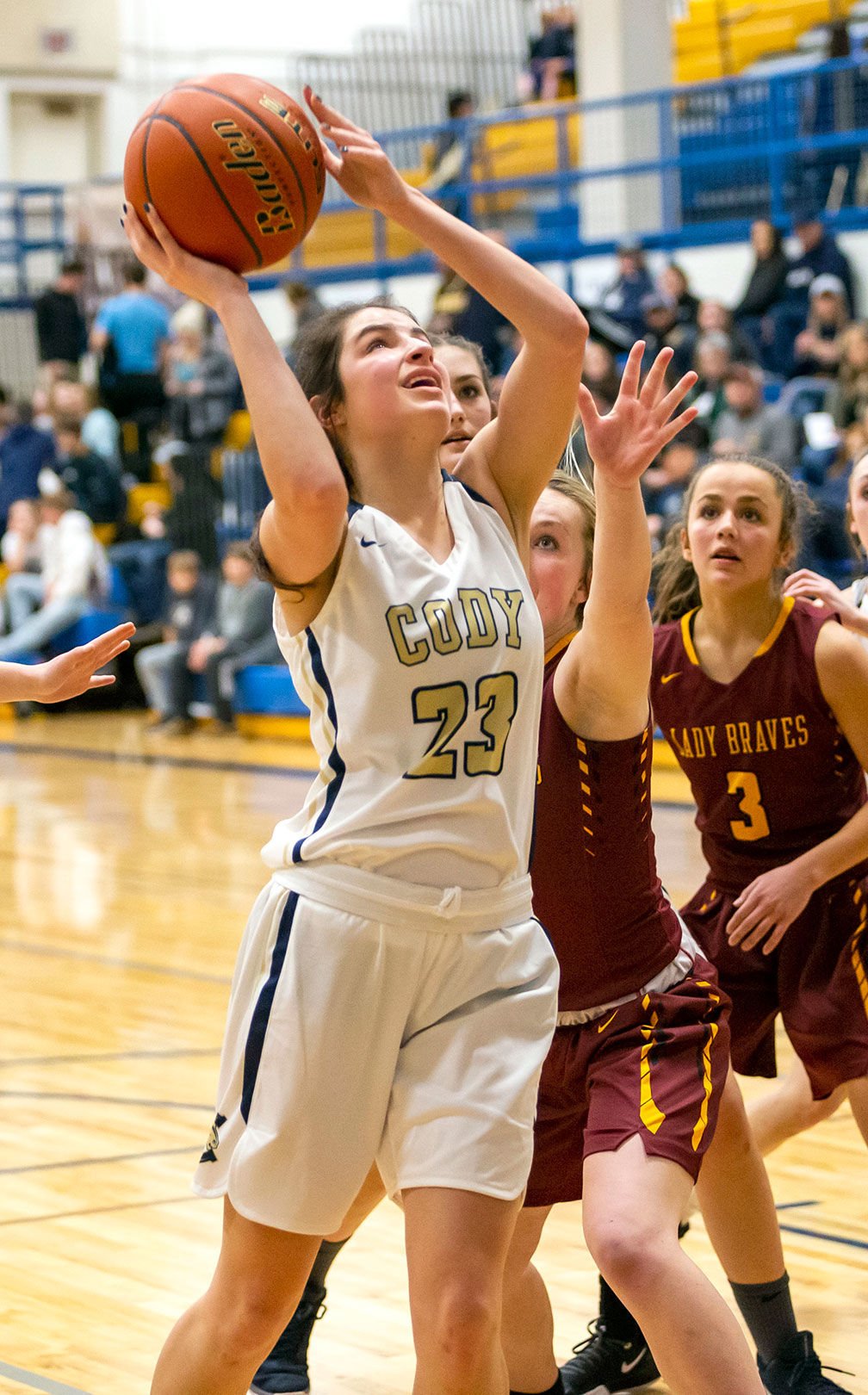 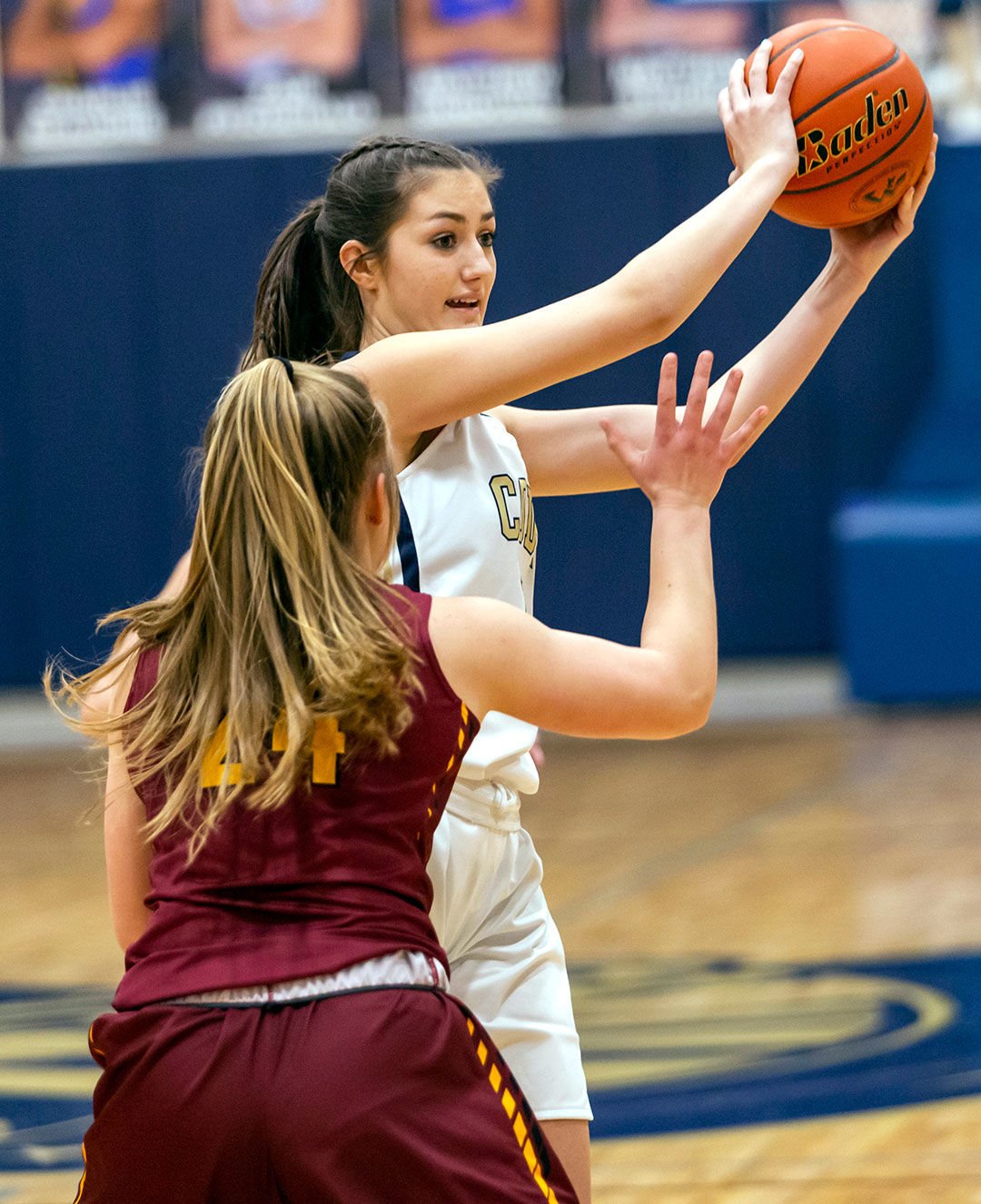 After more than 31 minutes, a back-and-forth game left the Cody girls basketball team down one to Jackson. Then Cody junior Brittan Bower took a pass on the outside. Her trey found net for a two-point lead with 40 seconds left and the Fillies held on for a 42-38 win against Jackson on Saturday at Sweitzer Gym.

“I saw her ready and loaded,” freshman Reece Niemann said. “I knew she was firing it in.”

It was Bower’s only basket of the game. She said she’d been struggling with her offense this season and had already missed a 3-point attempt earlier in the game, but when the late opportunity presented itself, she didn’t hesitate.

Torrie Schutzman, who finished with a team-high 16 points, provided late insurance with a fast break layup off a steal.

It took Cody (7-7) more than three minutes to light up the scoreboard, but after Kennedi hit Schutzman for a trey to take a two-point lead, the Fillies offense kept it up. Schutzman hit a deep trey later, Kennedi had a drive and a late pass to Ally Boysen for a layup and Cody took a 12-11 lead after one.

The teams traded baskets in the second, with Cody taking an 18-15 lead on a Bower inbounds pass to a cutting Kennedi for a layup roughly three minutes in. It was Cody’s last basket of the half.

Schutzman led Cody at the half with eight points, while Hailey Hardeman tallied eight as well for Jackson.

After falling behind 28-18 early in the third, Cody rallied. Schutzman and Kennedi hit treys, Ally Schroeder nailed a turnaround hook and Reece took a pass from Kennedi and turned it into a layup to get within one at 31-30.

Coach Chris Wagner said third periods have generally been a struggle for the Fillies, so to end this one with a lead was a refreshing change.

“We came out well and we haven’t been used to that,” he said. “We kept that momentum into the fourth.”

With seconds left, Schutzman found Reece down low, who was fouled just before the buzzer. She made both free throws to put Cody ahead 32-31 after three.

The Fillies worked to maintain a narrow lead in the fourth as both teams clamped down on defense. Bella Gwilliam briefly helped Jackson retake the lead at 38-37 on a layup, but Bower responded with her first points of the game that turned out to be the difference.

The Fillies couldn’t overcome Star Valley’s combination of outside shooting and size down low, falling 45-27 on Friday at Sweitzer Gym.

The Fillies never led in the 4A matchup and fell behind by double digits early in the opening quarter.

Schutzman led Cody with 10, including a deep trey late in the fourth. Otessa Olsen powered Star Valley (9-6) with 16.

“We were playing really hard, we did good things,” senior Teagan Thompson said. “They just got too many second chances.”

The Cody girls could barely take a moment to breathe as Star Valley opened on an offensive tear, scoring the game’s first 10 points in a little over 3 minutes. The Fillies then settled down after a drive by Kennedi, who finished with a turnaround runner for Cody’s first points. She scored the last points of the quarter as well on a fast break layup following a steal for a 12-5 Lady Braves lead after one.

Star Valley opened the second again on fire with a pair of treys and used that to pull away for a 22-8 lead late in the quarter. Reece capped the quarter with a jumper, but Cody was behind 22-10 at the half.

Kennedi led Cody at the half with four, while Lady Brave forward Olsen powered her way to eight points.

Schutzman opened the third with a trey and Schroeder had a productive stretch late of rebounding and scoring, but Cody couldn’t keep up with Star Valley, which expanded its lead to 31-16 after three.

Cody slipped further behind in the final quarter, but the deficit allowed bench players like Isabelle Radakovich, who recorded her first of multiple blocks soon after entering, to get some minutes.