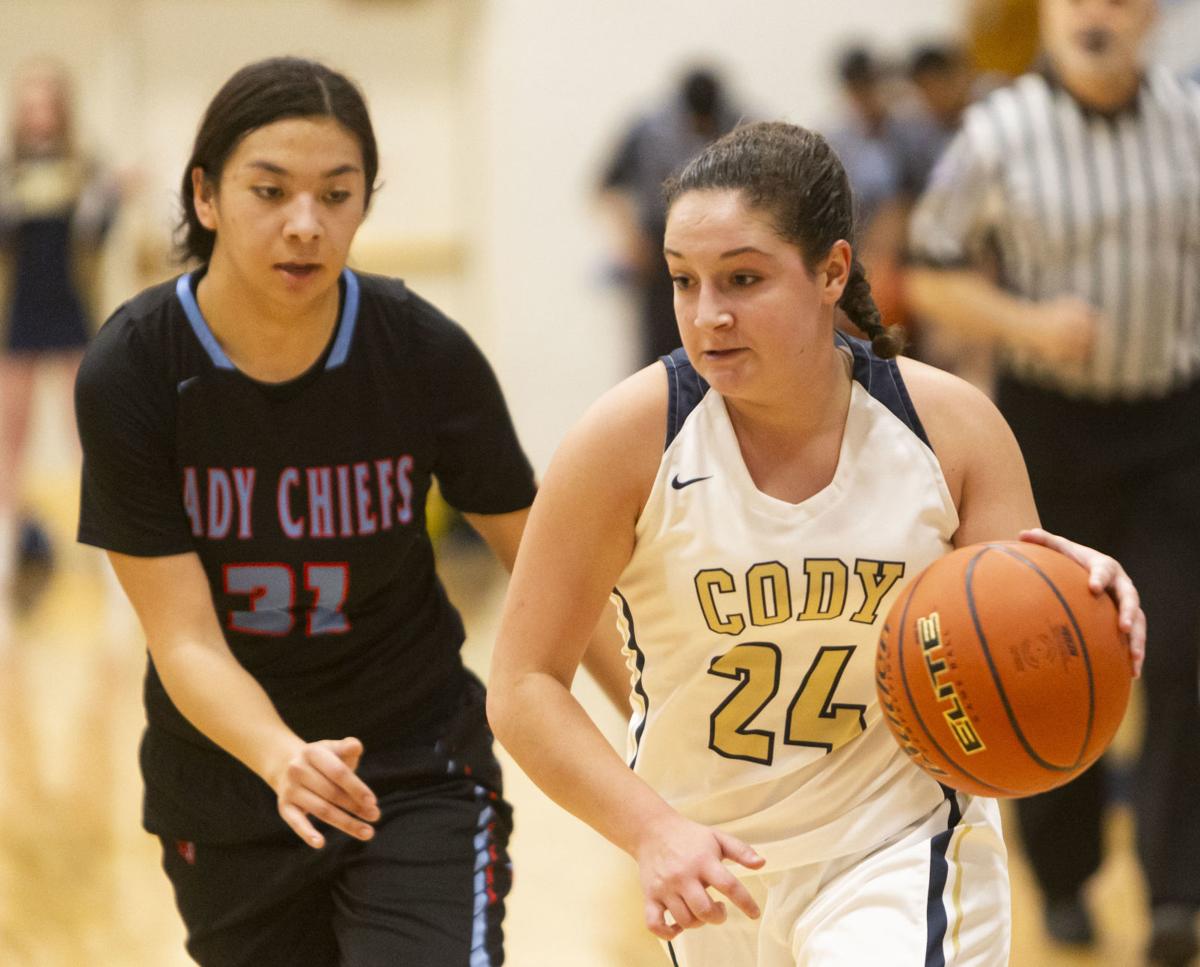 Torrie Schutzman dribbles down the court against a Lady Chiefs defender at Sweitzer Gym on Saturday. 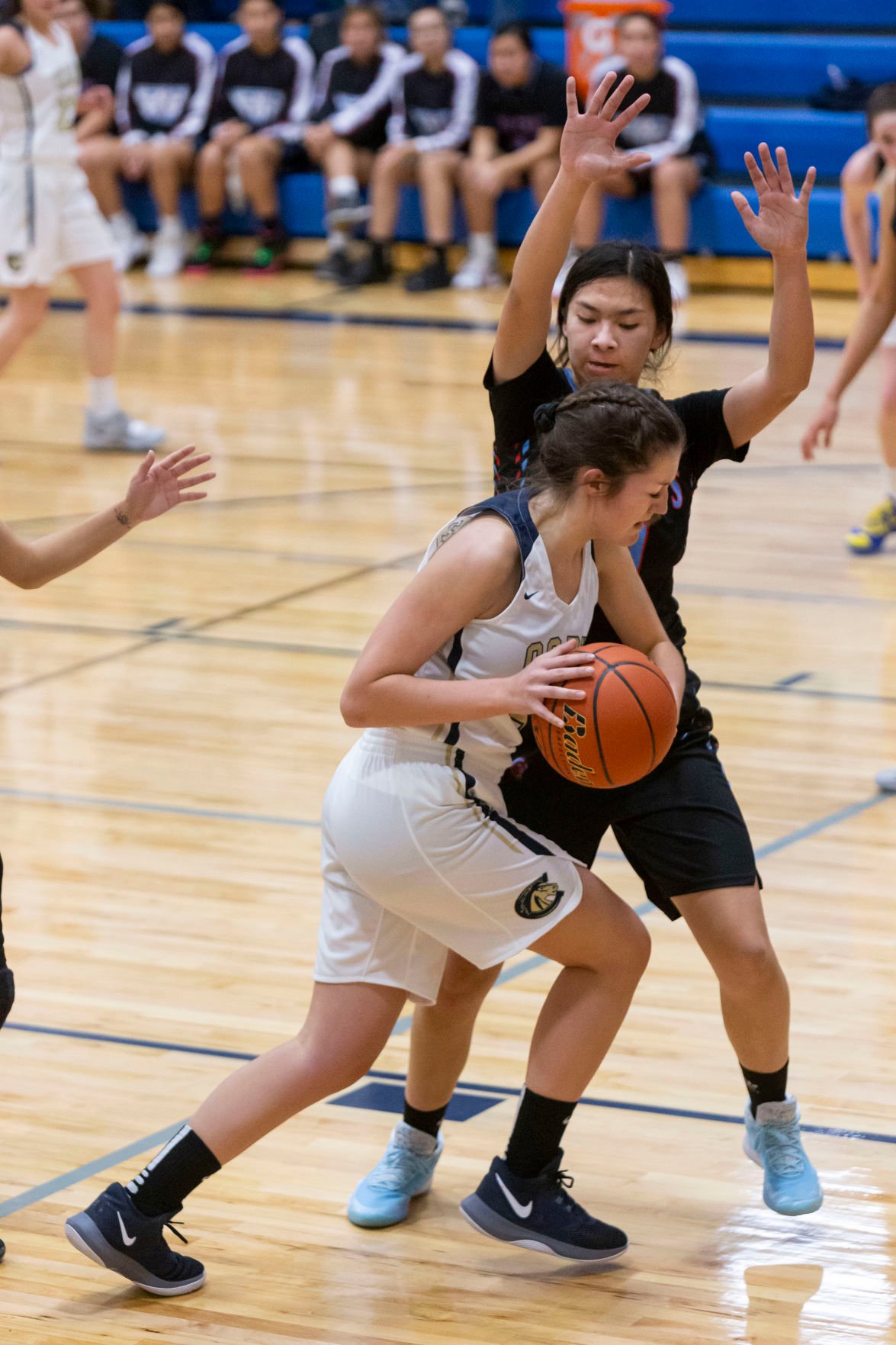 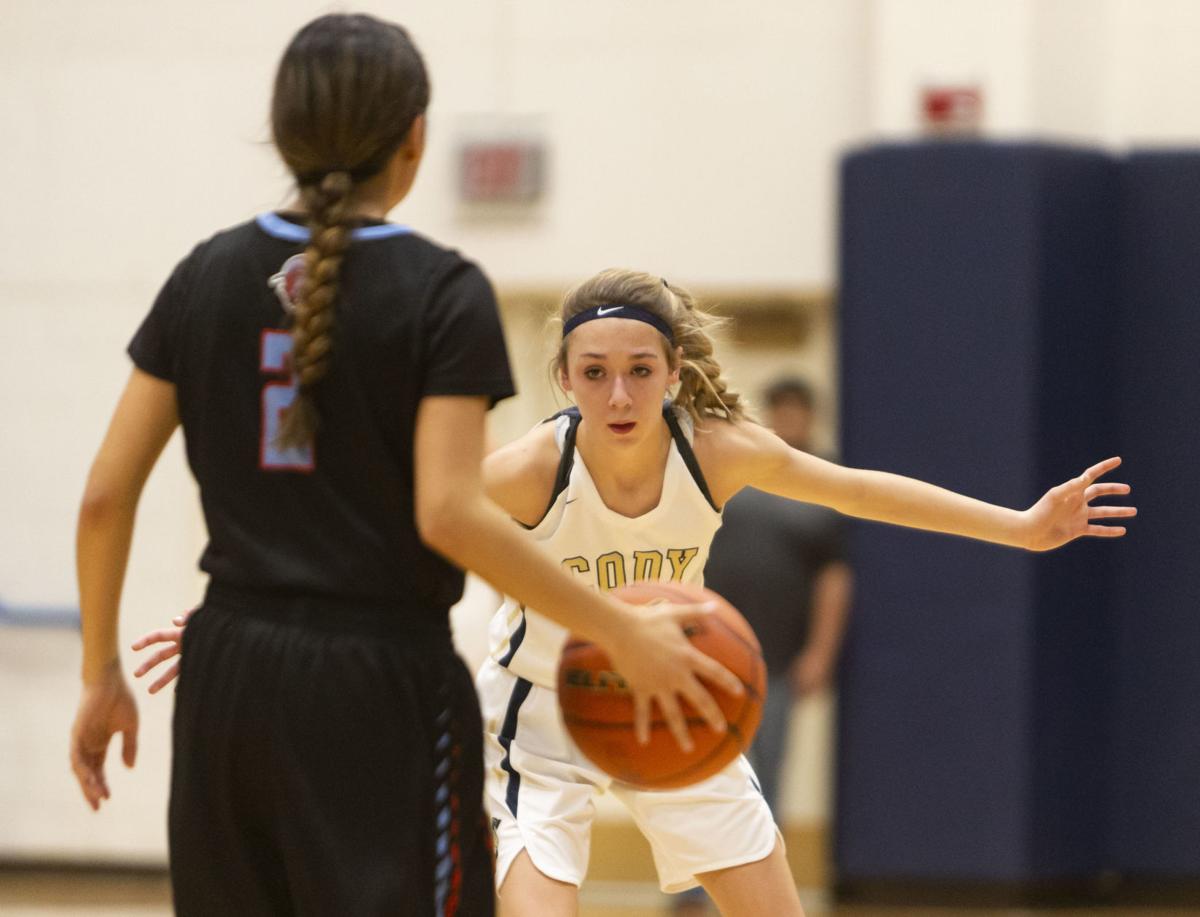 Torrie Schutzman dribbles down the court against a Lady Chiefs defender at Sweitzer Gym on Saturday.

The Cody girls basketball team began a new tradition after Saturday’s game, running to the weight room for a “Post Game Pump Up” to work through any frustrations.

There certainly were some, but not too many after the Fillies rallied to defeat Wyoming Indian 45-42 at Sweitzer Gym.

“I didn’t have any frustrations,” coach Chris Wagner said. “I love these games.”

Down two with 10 seconds left, freshman point guard Kennedi Niemann took a pass on the outside and, without hesitation, sank the game-winning 3-pointer. After a Lady Chiefs miss on the other end, Teagan Thompson tallied a pair of free throws with half a second left to seal the win.

“I just knew I was wide open, there was 10 seconds left on the clock and I felt comfortable,” Niemann said. “So I shot it.”

Cody (5-2) was down 36-25 early in the fourth quarter. After a timeout at 6:01, Brittan Bower found Torrie Schutzman outside the line for a trey to start a 12-2 run to finish the game.

Niemann finished with a game-high 19 points and Schutzman added 17.

The win was the second in two days after a 43-16 win Friday at Powell and capped a 3-0 week that also included a close win against Worland, a solid 3A team. Wyoming Indian (8-3) is a perennial state contender in 2A and Schutzman said the week was a good way to lead into 4A play.

Cody plays Friday at Natrona, which Wagner said looks to be back on the upswing after a few down years.

“I like that we played teams like Worland and Wyoming Indian,” Schutzman said. “Some of those 4A teams are better (than the last two opponents), but it helps to prepare us for the 4A schools.”

Against the Lady Chiefs, Cody took an early lead on a pair of 3-pointers, one each by Neimann and Schutzman. But the Lady Chiefs turned an 8-0 run midway through the quarter into a 14-6 lead. Lake Harrison stopped it with 1:30 left when she crashed the offensive boards, put back the bucket despite the foul and made the free throw. Schutzman added a pair of free throws with 10 seconds left for a 14-11 Wyoming Indian lead after one.

The second quarter went back and forth, with Reece Niemann briefly tying the score at 18 on a long jumper. Sandie Friday responded with a layup to put the Lady Chiefs ahead 20-18 at the half.

Kennedi Niemann led Cody at the half with eight points, while Friday and Angela Astorga both tallied eight for Wyoming Indian.

Cody fell behind in the third as the Fillies couldn’t tally points until Kennedi Niemann sank a trey with 2:10 left to halt a 7-0 Lady Chiefs run and make it 27-21. The teams mostly traded points for the rest of the quarter but the visitors pulled further ahead for a 34-25 lead after three.

Wagner said he held off on too many timeouts down the stretch to give his players the chance to take ownership.

“I want them to have to play through those situations,” he said. “As a coach you can’t bail them out.”

Schutzman finished the first big run of the fourth with a jump shot down low to pull ahead 39-38, but the Lady Chiefs responded with a pair of buckets to go ahead 42-39, at which point Schutzman made one of two free throws to set up the situation for Kennedi Niemann’s big trey.

The Fillies allowed just two field goals in the first half in a stifling display to secure the season series with the cross-county rivals.

“What was important was going into the game and playing up to our level,” Thompson said.

Schutzman scored a game-high 10 points, Bower added nine and Harrison eight as the team shared the ball and shared the steals.

Both teams started cold on offense, with Schutzman scoring the game’s first points on a fast-break layup with 3:50 left after she yanked the ball from a defender.

Thompson added a layup on a pass from Schutzman and Kennedi Niemann hit a 3-pointer while Cody held Powell to a single layup.

In the second quarter Cody kept up the offense and did almost as good on defense, holding Powell to a single field goal. Bower, who scored five points in a single stretch mostly off offensive rebounds, and Harrison each scored five points down the stretch to give the Fillies a commanding 19-5 lead at the half.

“We for sure have worked on our defense,” Bower said. “We looked especially at Powell for this.”

Bower found Harrison for a 3-pointer early in the second half to start a 9-0 run to open the third quarter and even more effectively put the game away.