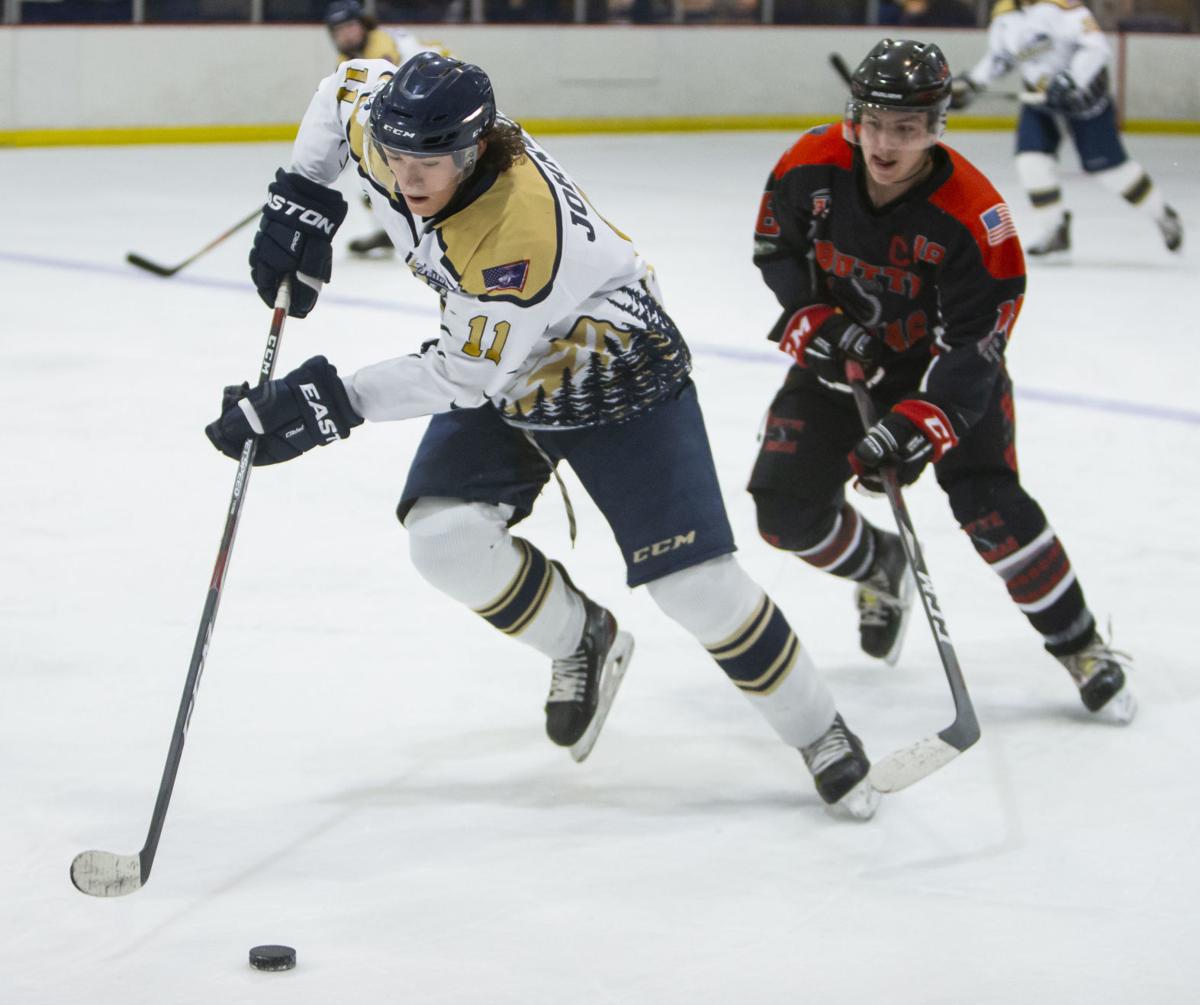 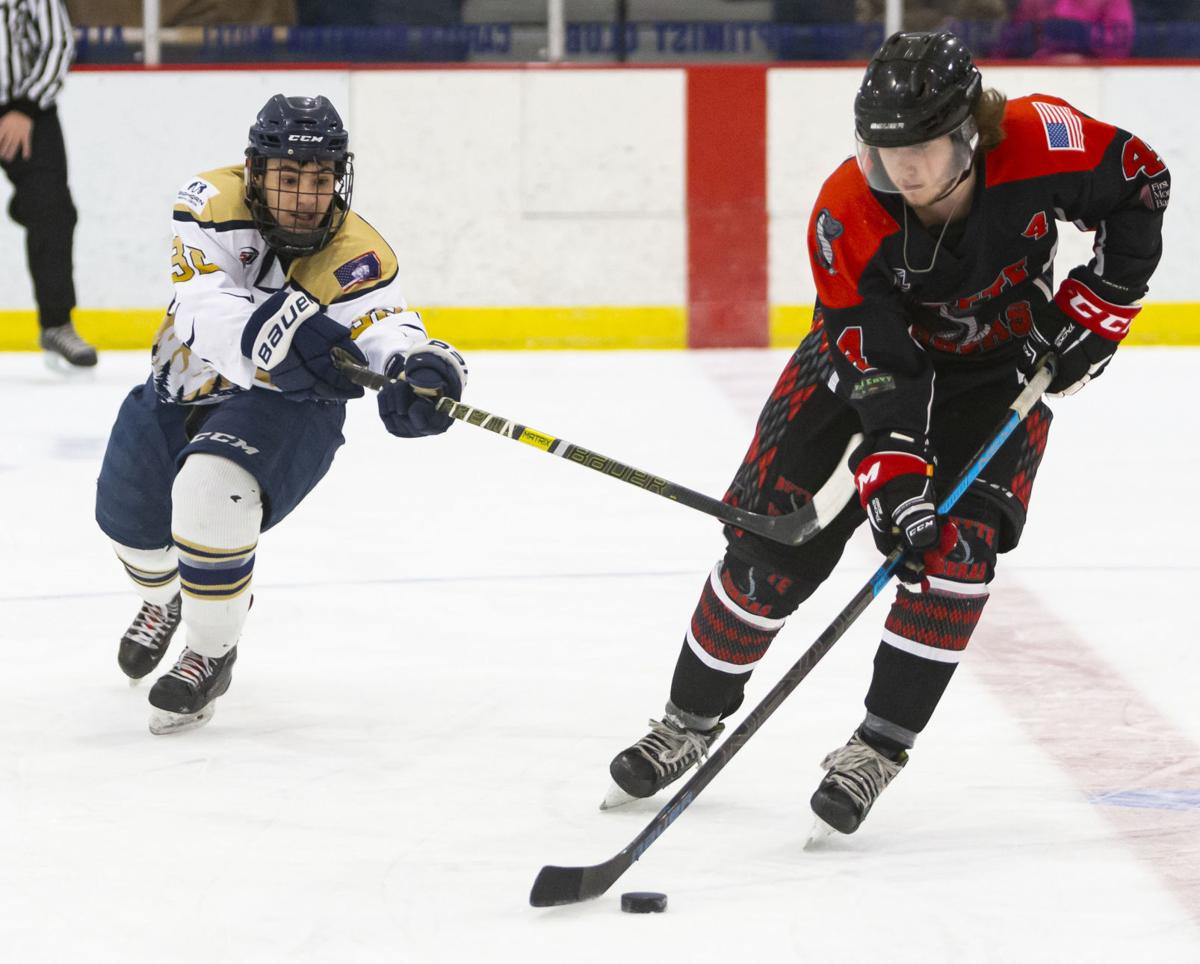 Quake Forward Ryan Lovelace goes after the puck against a Butte defender Friday.

Quake Forward Ryan Lovelace goes after the puck against a Butte defender Friday.

The Yellowstone Quake hockey team outlasted the Butte Cobras 6-3 on Friday night before falling to that same team Saturday.

On Friday, Will Yates led the Quake (8-13-2) with two goals, while Dylan Rumpke, Jack Harris and Ryan “Mighty Mouse” Lovelace chipped in two assists apiece. Lovelace earned that moniker from his father who was in attendance from North Carolina at Friday’s game. Whenever he scores, the “Mighty Mouse” theme song is played from the Riley Arena speakers.

Logan Cooksy made 32 saves in goal.

“It was really just a team effort out there to help me out,” Cooksy said.

It was a game of offensive domination as the Quake outshot Butte 51-35.

“We just kept it in their zone a lot,” Yates said. “It felt good to really help our goalie out.”

The Quake already have three more wins than the previous season total.

“That confidence, you can see it in the guys,” coach Phil Oberlin said. “It’s building.”

It was an unusual game in more ways than one.

The team put on a teddy bear toss to benefit Holiday Helpers. After Yates scored his first goal, the furry friends came flying onto the ice from the bleacher section.

“It means the world to be able to help out members of the community,” Yates said.

There were so many bears littering the ice on the bleacher-side of the arena that both teams had to chip in to scoop up the toys. In all, 90 stuffed animals were donated.

“I didn’t expect that,” Cooksy said with a laugh.

A lace from Spencer Platt’s shin pads came loose and hooked itself onto a Butte players skate, causing the two to become hopelessly entangled at the end of the ice. A stop in play was called so the two could become unhooked.

But the Quake started the night slow, a trend which continued on Saturday. Butte (2-21-0) struck first with a shot from Kyler Garsjo with 9:21 left in the first period.

“I think some of the guys had an idea we were going to win by a lot,” Oberlin said. “But we were happy by the fact they didn’t get frustrated.”

The Cobras’ goal seemed to invigorate some energy into Yellowstone and 3:16 later Yates tied it at 1-1. His goal came on a short fast-break feed from Tyler Cramer.

Butte answered again at 4:27 in the first with a goal from Joe Erickson that just trickled past Cooksy.

But it was the second period when the Quake took the upper hand.

Just 16 seconds into the new frame, Yates scored his second goal to tie it at 2.

Despite allowing a Cobras goal at 16:40 when Garsjo found an opening through the five-hole, the Quake still didn’t lose a beat.

Platt evened the game when he beat Butte goalie Danny Fielding with a slap shot that hit Fielding’s left shoulder pad and then bounced into the goal.

Yellowstone took its first lead of the night at 2:33 in the second when Rumpke extended his stick through a scrum and pushed the puck in goal.

In the third, Cody local Logan Brown scored in his inaugural Quake appearance when he beat Fielding to his right side.

With 1:23 remaining, Harris scored on an open net goal. His shot from center ice deflected off a Cobras defender before bouncing through the middle of the goal.

On Saturday, the Quake could not overcome another slow start, falling 4-2 to Butte. After a strong offensive output on Friday, the team took a step back, only landing 21 shots on net.

“It was a collective struggle,” Cade Rosansky said. “We were basically playing down to their level when we’re a lot better of a team.

“Playing them the night after, I think we thought it was going to be a lot simpler.”

Butte took a 2-1 lead in the first period and would keep that lead for the remainder.

Mason Merager and Rumpke scored for the Quake on Saturday. Cody-local Hudgel Selk got the start in goal, making 22 saves.

Yellowstone will try to get back on track when it plays Great Falls (18-2-3) on the road Friday and Saturday, the only team in their division the Quake haven’t beaten yet this year.

“We feel like we can beat anybody,” Rosansky said.