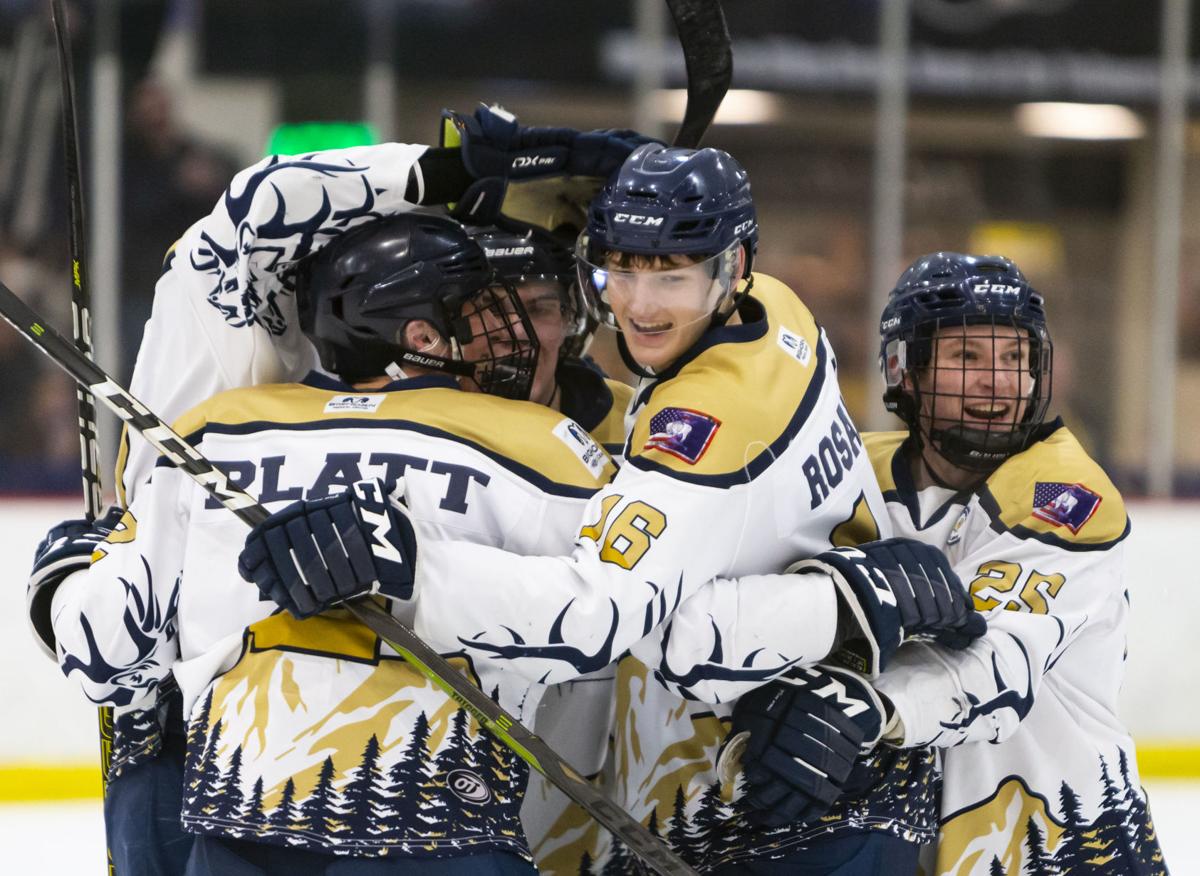 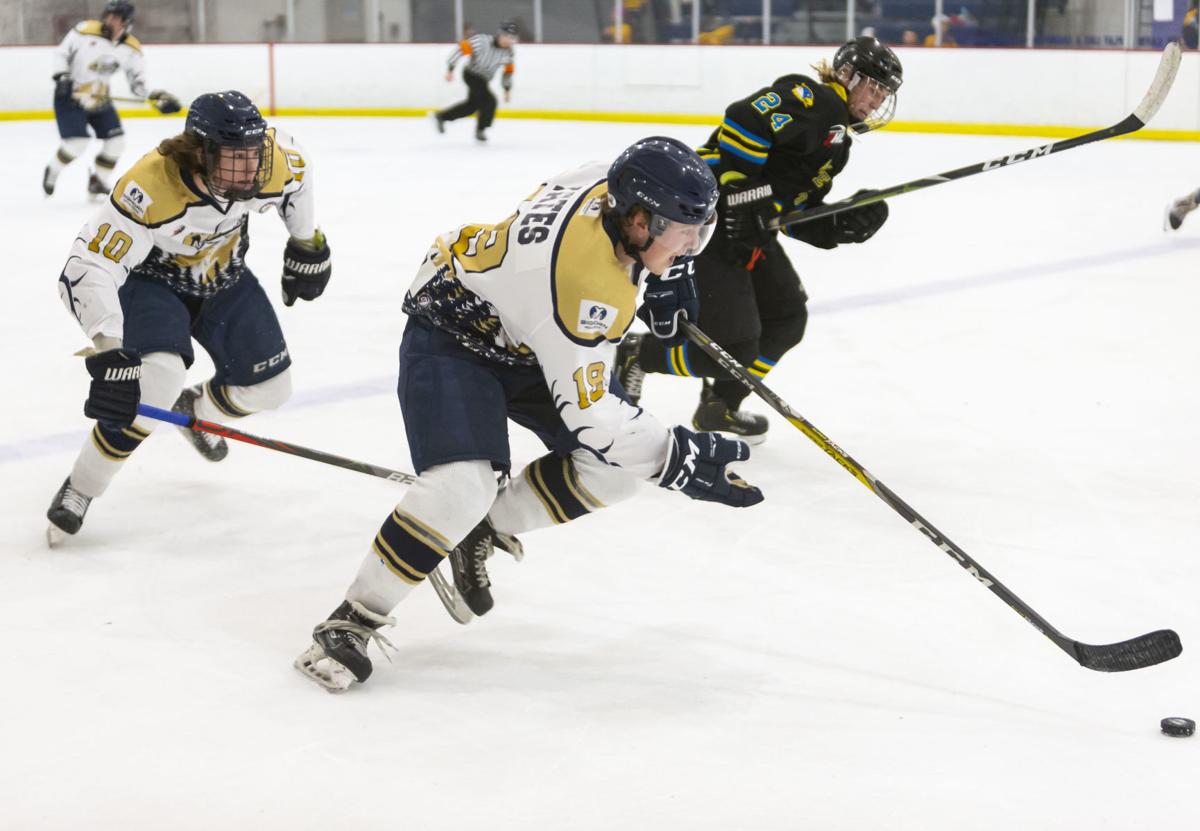 Tyler Cramer and Will Yates go after the puck while Sheridan’s Stepan Ruta moves to get between Yates and the goal. 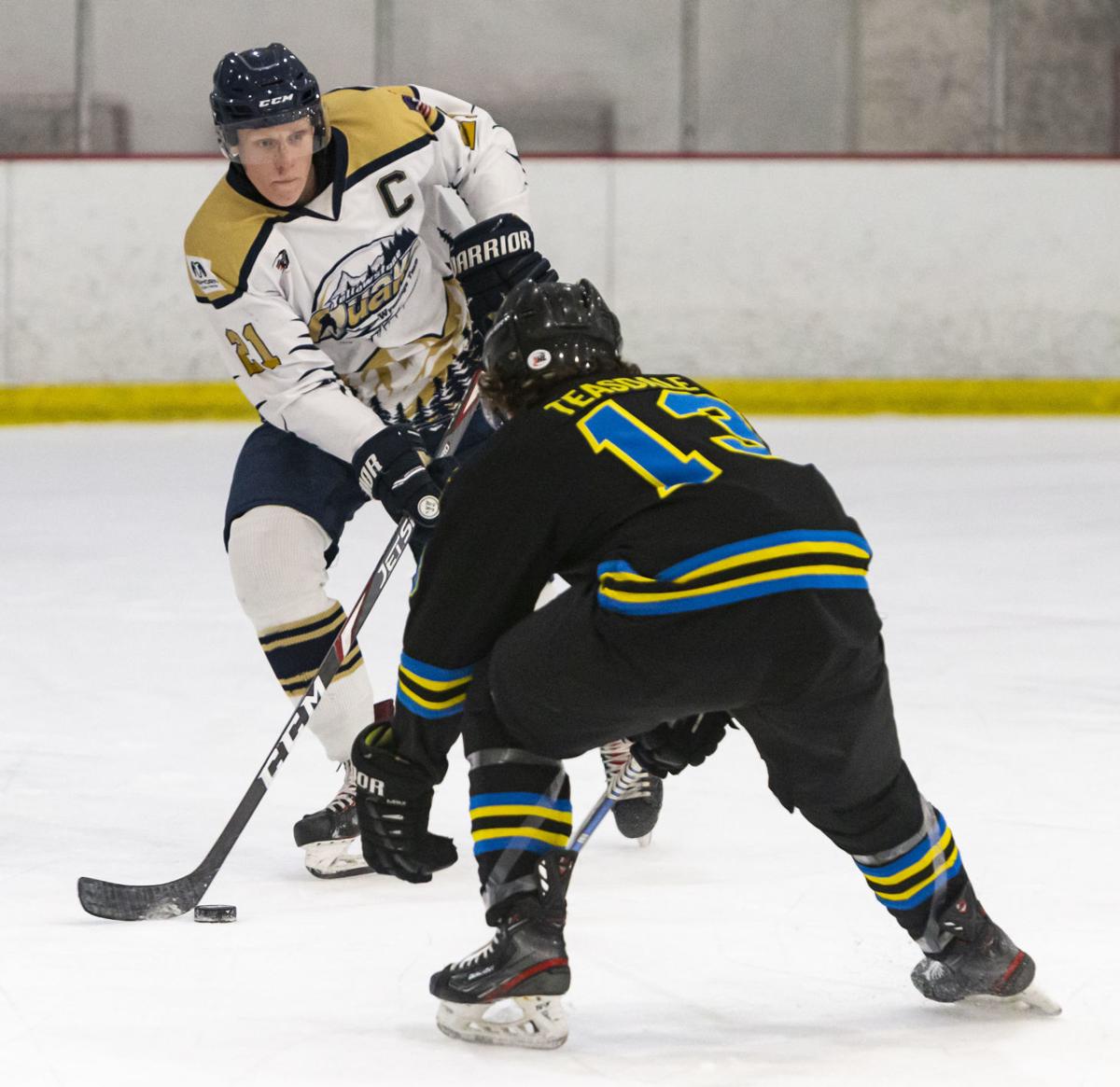 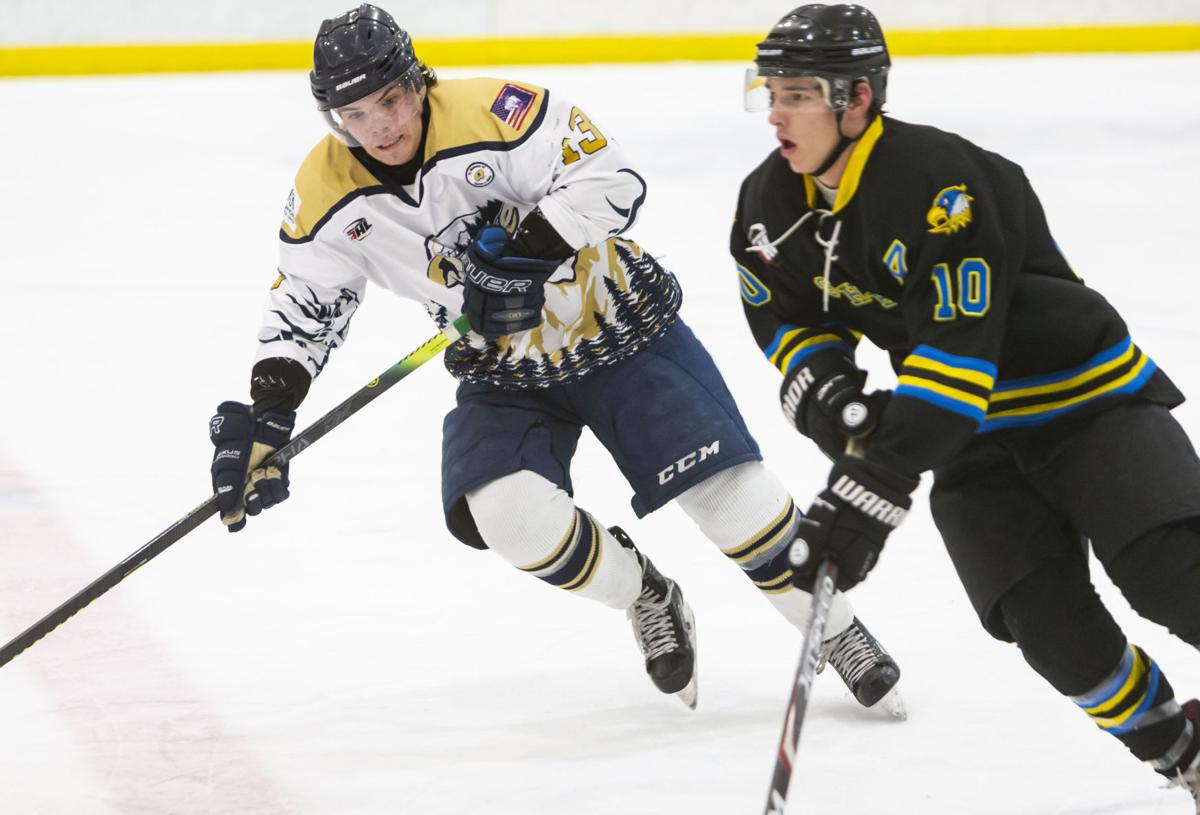 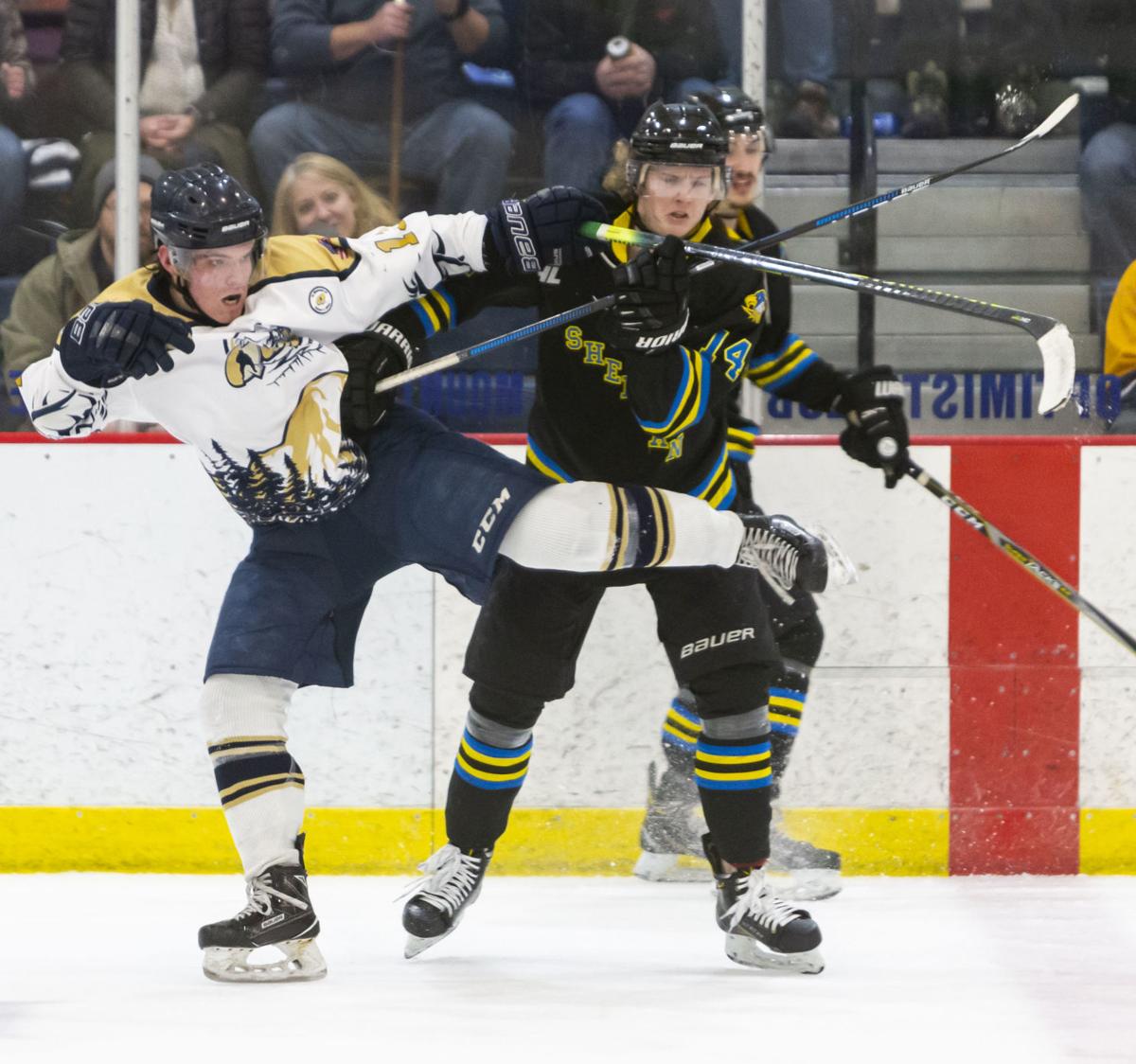 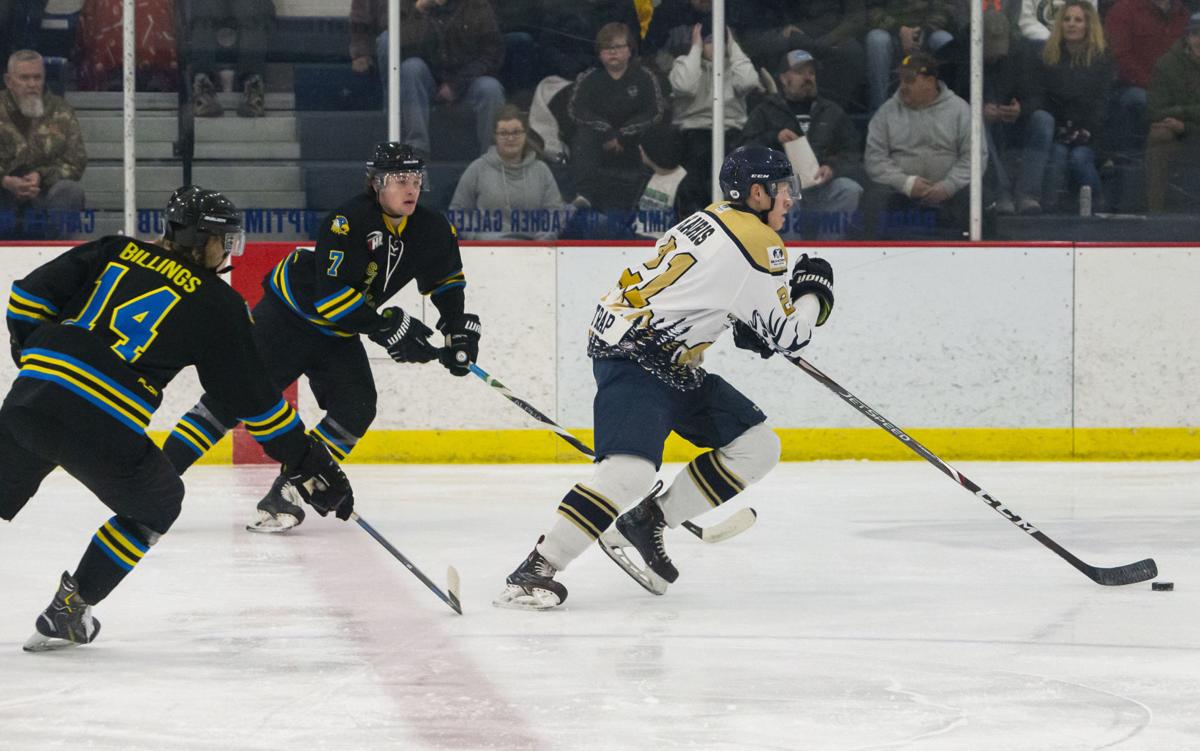 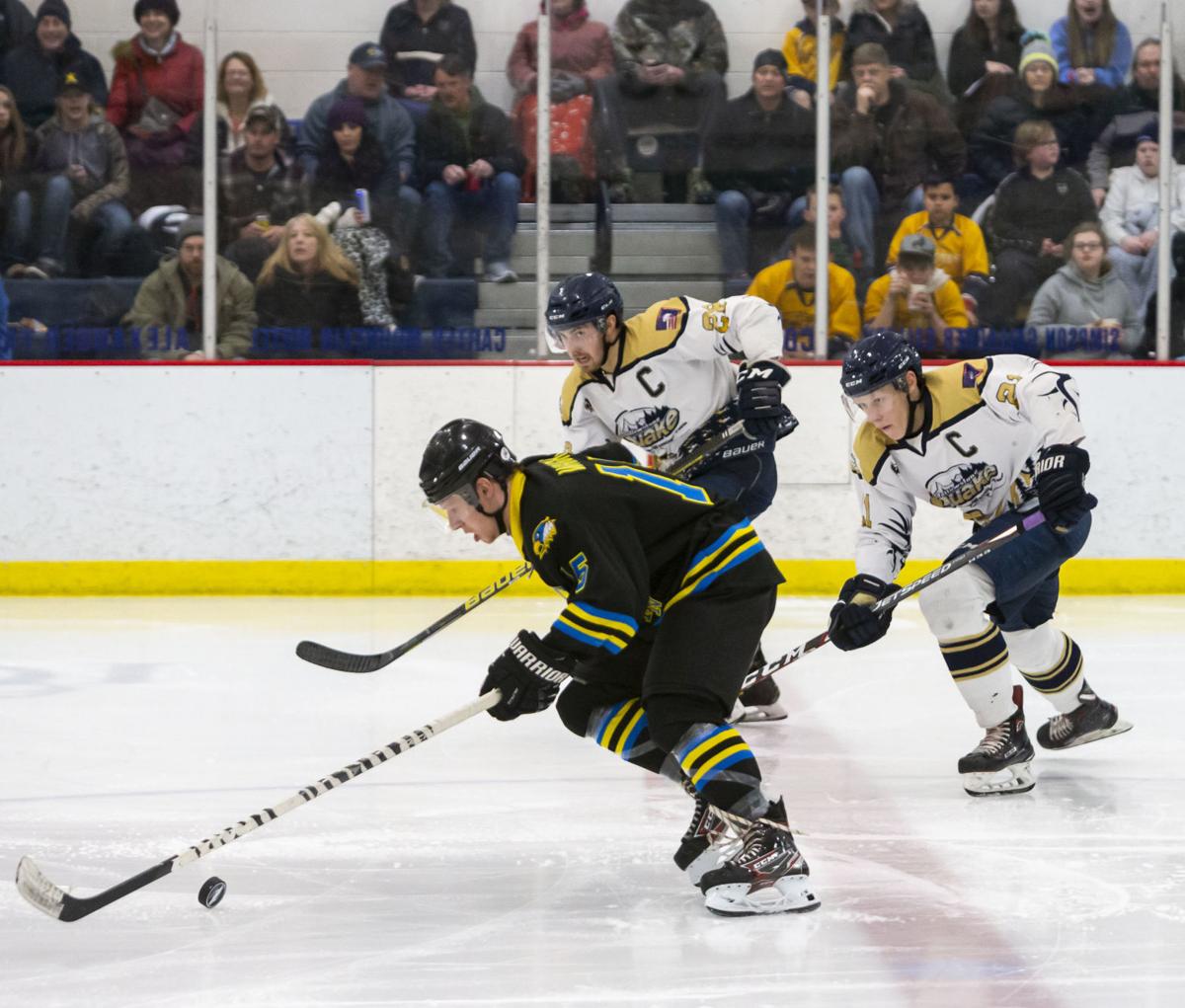 Tyler Cramer and Will Yates go after the puck while Sheridan’s Stepan Ruta moves to get between Yates and the goal.

The Yellowstone Quake rallied from a two-goal third period deficit to beat the Sheridan Hawks 4-3 at Riley Arena Friday night.

Down 2-0 with less than 12 minutes remaining, the Quake scored four straight goals in a span of 6:16 to help push its winning streak to six games.

“We don’t give up,” Dylan Rumpke said. “We’ve been focusing on playing 60 minute games and just believing in the guys.”

Sheridan (30-7-1) finally answered the barrage with a goal at 1:37 in the third but did little more to pressure the offensive zone. Quake goalie Michael Allman finished the game with 51 saves.

After earning 15 minutes of penalty time in the second period alone, the Quake was able to settle down and focus in the third.

“We pretty much killed ourselves with penalties in the third so we didn’t get a lot of opportunities,” coach Phil Oberlin said. “We’re really focused on winning that third period right now.”

But more than anything, it was a huge fight between the teams that broke out halfway through the third that really ignited the Quake, propelling the team to three straight power play goals over a span of 3:16. It seemed nearly every player on the ice was holding another back, with Allman square in the middle of the action.

“Anytime you get a five-minute power play it’s going to help you,” Oberlin said.

The Quake took a 5-4 player advantage out of the scuffle and exactly one minute later tied it at 2-2.

“They were more frustrated,” Spencer Platt said with a smile. “We stayed calm the whole time, for the whole period the penalty kill showed up to play.”

Rumpke started the rally with 11:18 remaining on a shorthanded fast break feed from Jack Harris. Despite Sheridan goalie James Downie making an incredible save on his first shot, that move drew him out of position and left an open net for Rumpke.

“We were a man down and I was trying to keep the puck deep in the zone and just poke it in,” he said. “I just slid it past.”

Less than two minutes later the Quake scored the equalizer when Cade Rosansky deflected the puck into the net. At 8:17, Rumpke scored another and then Spencer Platt hit the net on a deep wrist shot for a 4-2 lead.

On Saturday, the Quake had the tables turned, allowing three unanswered goals to Sheridan in a 4-2 loss.

Yellowstone held a 2-1 lead entering the third off two scores from Rumpke, and was dominating the shot battle 27-15.

Despite continuing to outshoot the Hawks in the third, Allman couldn’t provide help on the defensive end, letting three of the six shots he faced slip by.

With the loss the Quake (17-20-2) had its six game winning streak snapped, yet remains fourth in the Frontier division.

Yellowstone will play first-place Bozeman (32-6-0) on the road Saturday night. The last time these teams played on New Years Eve, the Quake won 4-3 in an overtime shootout.