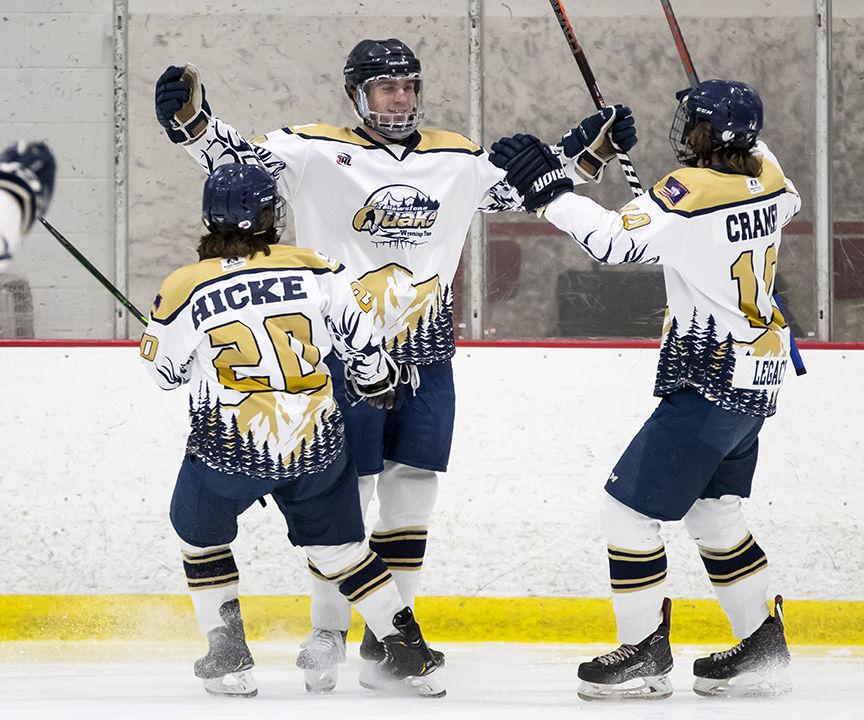 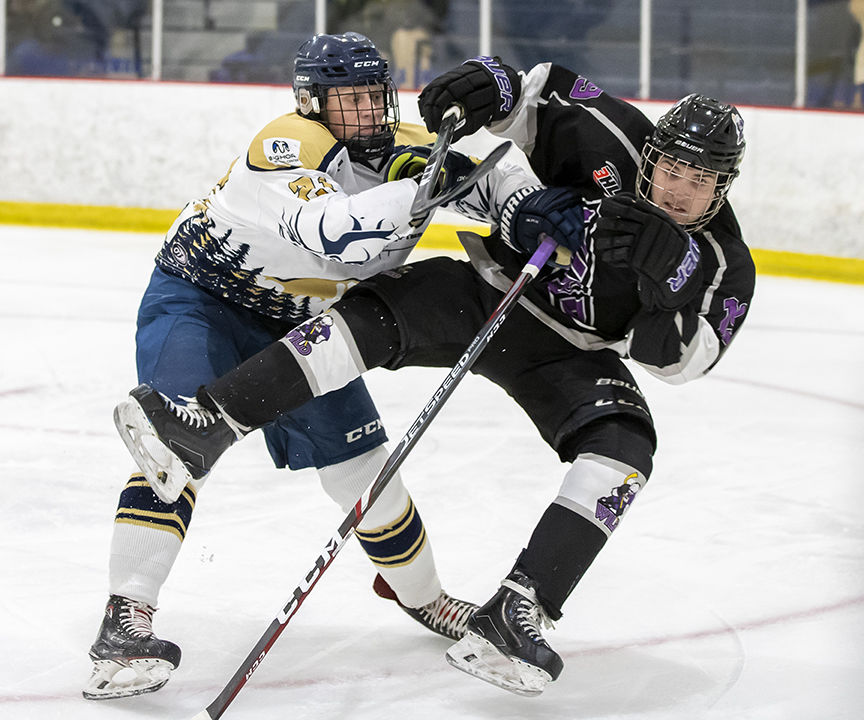 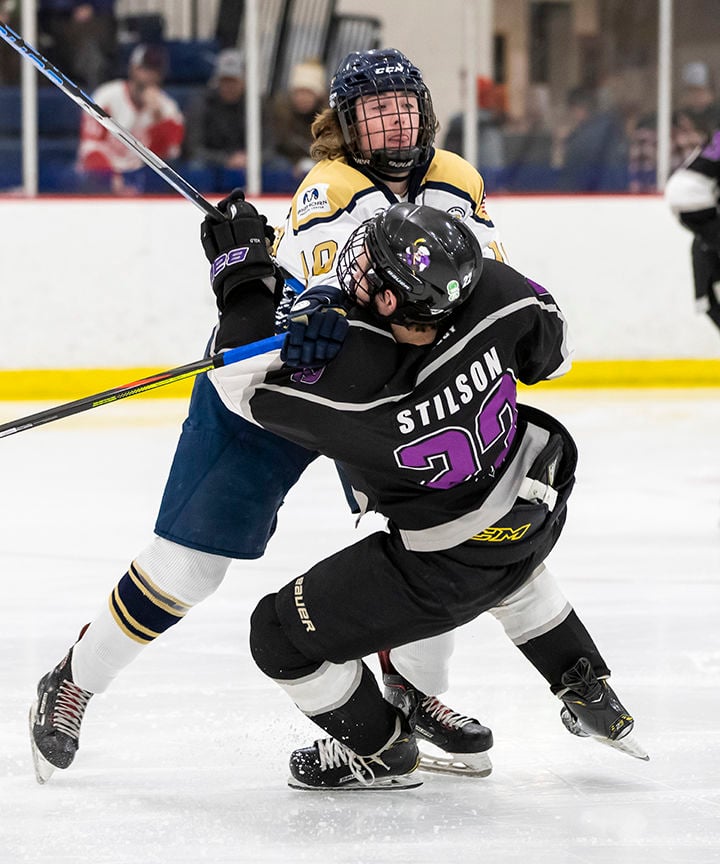 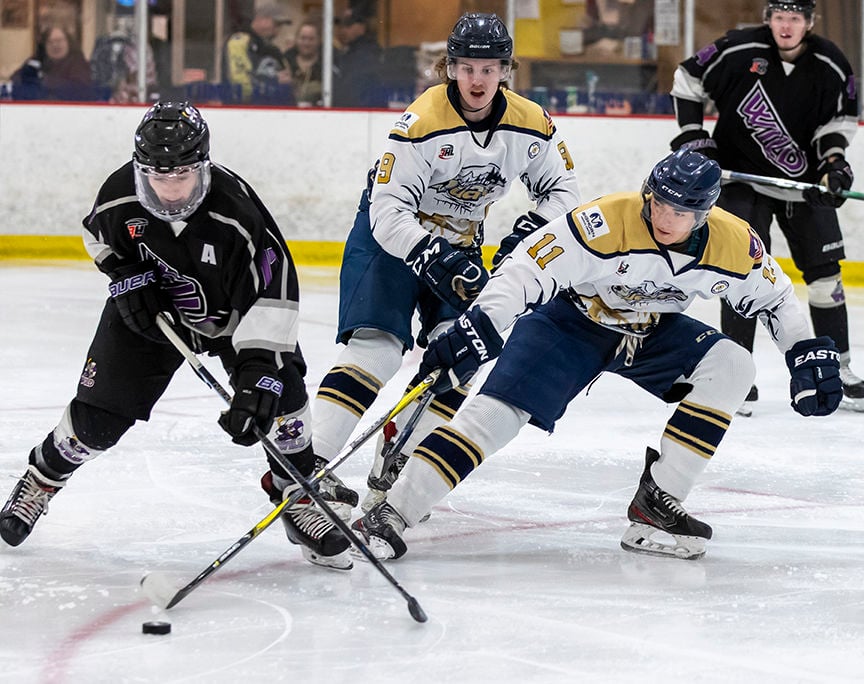 Seth Bennett and Kirwin Johnson work to get the puck. 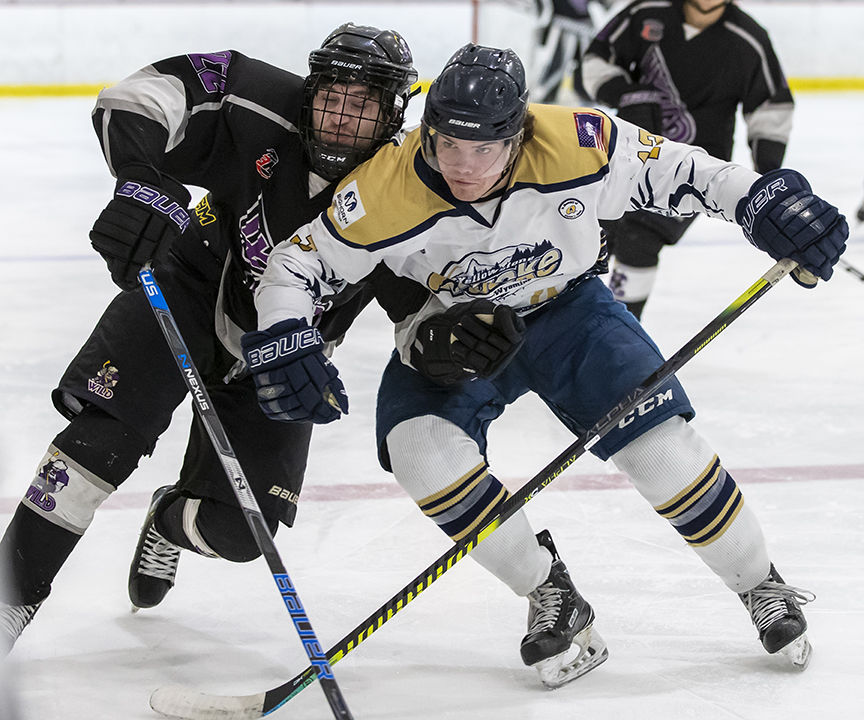 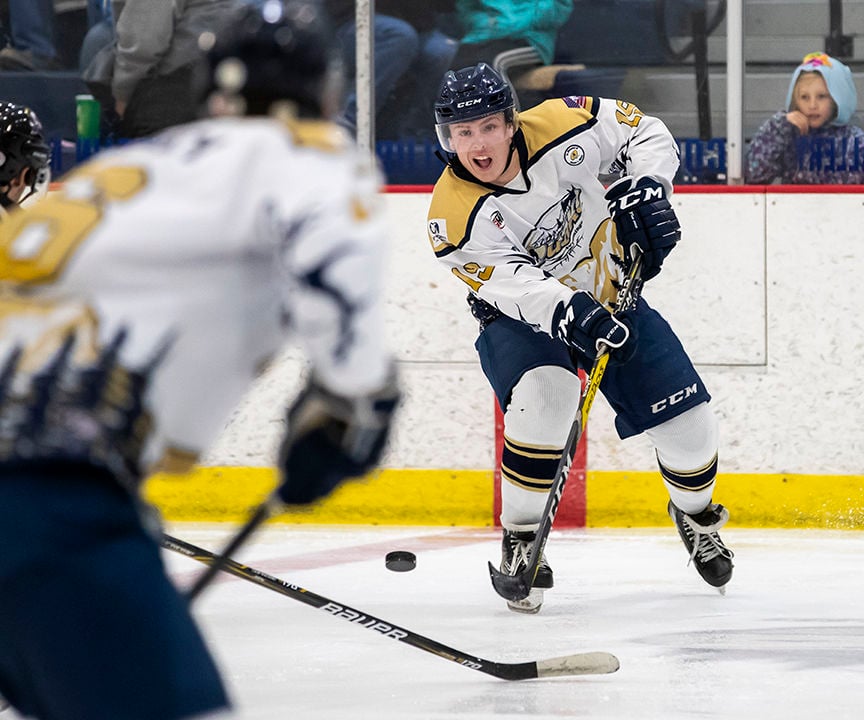 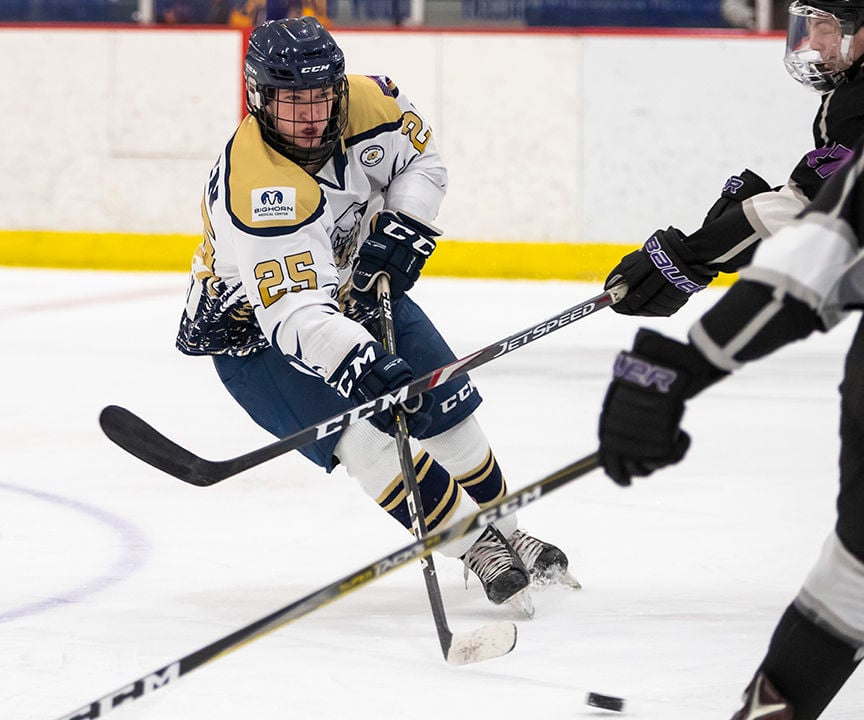 Seth Bennett and Kirwin Johnson work to get the puck.

The Yellowstone Quake beat the Gillette Wild 4-1 on Saturday night thanks to a surging defensive performance.

But defense wasn’t the only surge that occurred Saturday night.

After pulling out the win, backup goalie Logan Cooksy conducted the team through a celebratory clap-and-dash inspired by the National Hockey League’s Carolina Hurricanes, known by that team as “Storm Surges.”

As Cooksy led the team through an overhead clap at center ice, the players then broke for the bleacher-side boards, leaping and crashing upon the glass as their fans let out an even more thunderous cheer.

“We thought it’d be a good way to get the fans involved more,” Jack Harris said.

The Quake outshot the Wild 35-27 after being outshot by 16 the previous night.

“That was our goal yesterday and it didn’t happen,” Oberlin said with a chuckle.

On Friday the Quake fell 4-2 to the Wild. Despite scoring the game’s first goal and tying it at 2-2 in the second, Yellowstone could not hold on. Jon Green and Will Sobaski each had a goal in the loss

By limiting the Wild to 27 shots on goal, Quake goalie Michael Allman had all the support he needed for the near-shutout win.

“We just played with a lot more effort,” Allman said.

In 60 career games with the Quake, Allman has yet to register a shutout, and unfortunately after Saturday that streak will continue. For 58 minutes and 23 seconds Allman held the flood gates, before giving up the Wild lone goal.

“I was thinking about it a lot,” Allman said with a dejected smile of the shutout opportunity.

That single goal shouldn’t take away from how well Allman has been playing.

Allman is tied for 11th out of all goalies in the 34-team North American 3 Hockey League with a .921% goals against average. His performance is even more commendable when considering his stressful work environment. No goalie has been peppered with more shots than him in the entire league. In fact, Allman has received 38 more shots than the second highest goalie. Yet, the Norwegian comes to work everyday with a smile on his face.

“He’s been playing really well and had good rebound control tonight,” coach Phil Oberlin said. “He does what we expect of him every game.”

Oberlin said he will be considered as a top candidate to represent the team at the NA3HL Top Prospects Tournament in February.

Dylan Rumpke led the Quake with two goals on the night.

Rumpke got the scoring going at 13:46 in the first with a breakaway score.

In the second, Evan Snyder scored on a broken play that drew Gillette goalie Shane Phillips out of net and onto the ice. Snyder flipped the puck over the outstretched keeper for a 2-0 lead.

Later that period, Rumpke scored his second while bringing the puck across the ice just shy of the blue line. He sent a wrister over Phillips’ left shoulder to make it 3-0.

“We were playing with a shoot-first mentality,” Harris said.

About halfway through the third period the game got violent as Harris delivered a menacing check on Gillette’s Jacob Sundgren. A few minutes later, Sundgren returned the favor. The Quake’s Will Yates didn’t like that and showed his displeasure by tackling Sundgren.

The referees issued matching roughing minors to Yates and Sundgren.

Although the Wild did get past Allman late in the third with a Mason Hoffman goal, the Quake weren’t out for the count.

With only 3.7 seconds remaining, Harris sent a cross-ice puck from his own blue line in for an open-net goal; the puck carrying just enough speed to dribble across the goal line.

Yellowstone will return to action on the road Friday against league bottom-feeder Butte (6-29-0).