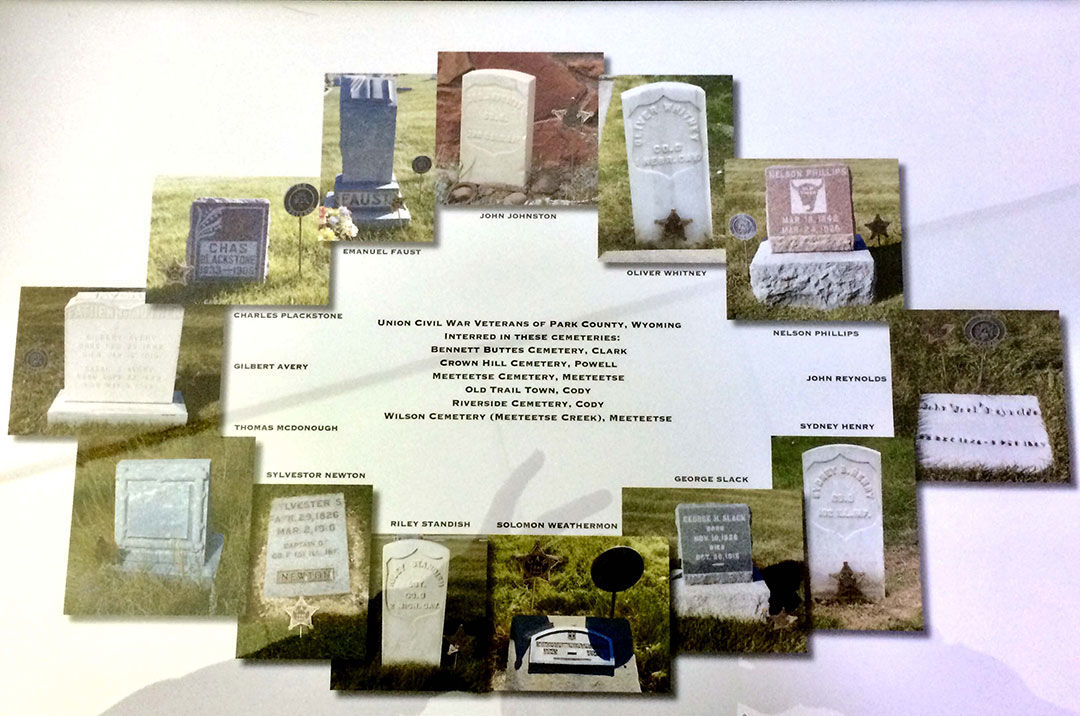 The group took pictures of the graves of all 13 of the U.S. Civil War veterans identified as having died in Park County. 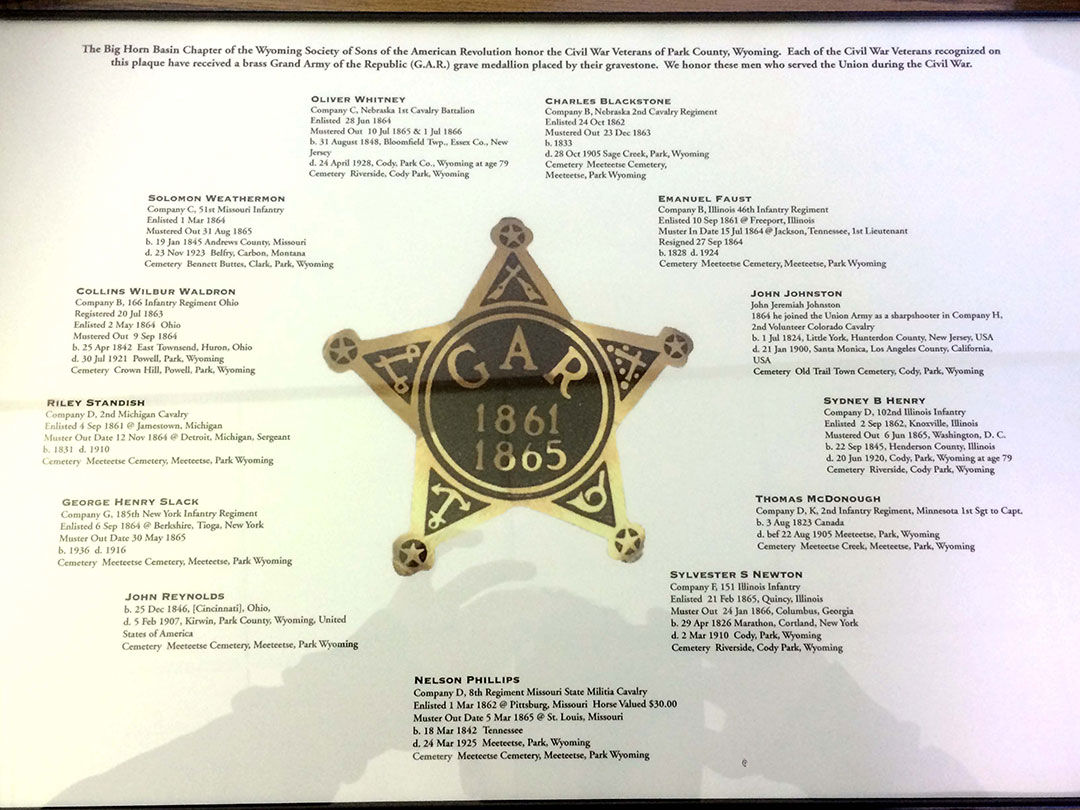 A plaque honoring the Civil War veterans buried in Park County is slated to be displayed at the Cody Library. 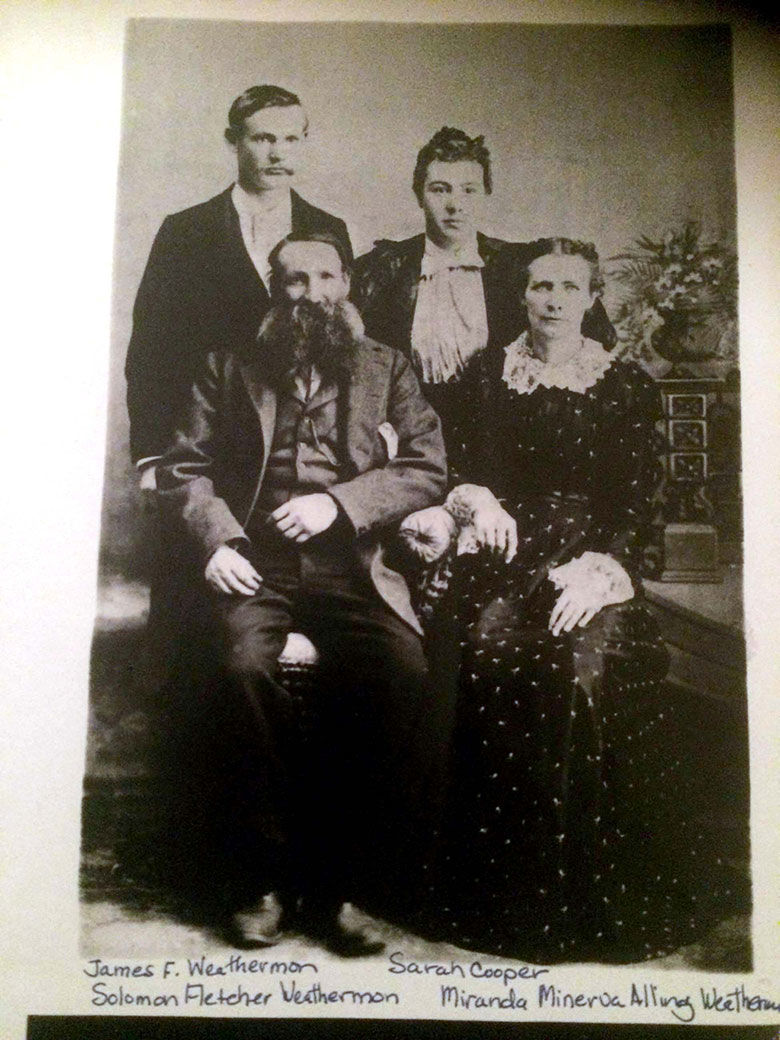 The group took pictures of the graves of all 13 of the U.S. Civil War veterans identified as having died in Park County.

A plaque honoring the Civil War veterans buried in Park County is slated to be displayed at the Cody Library.

The Civil War will forever be considered one of the most significant events in United States history. It was recently discovered that 13 Park County residents took part in the war.

“We feel it important to recognize individuals who basically fought for our country,” said Walter Hartung, Sons of the American Revolution member.

The Big Horn Basin Chapter of the Wyoming Society of the Sons of the American Revolution made the discovery combing through internet databases and other public records over the course of the project. All of the individuals fought for the Union.

“When we started out we didn’t (think) there was going to be a Civil War vet in Park County, but sure enough, we’ve identified 13,” said chapter president Keith Francik.

Brushing aside weeds and taking trips onto private lands, the organization collected its findings over three years.

Members from the chapter presented two plaques before the Park County commissioners on Feb. 4. Included on one plaque is rank, regiment, date and location of birth and death. On the other is a photo of each veterans’ gravestone. Commemoration markers were placed at each gravestone spread out over six local cemeteries.

“The families and the descendants – it’s really important to them,” said commissioner Jake Fulkerson. “Twenty, 30, 50, 100 years from now look at what you’ve preserved. Other people are going to go back and find this.”

Meeteetse man Thomas McDonough was a captain while Cody-buried John Johnston was a sharpshooter. Nelson Phillips of Meeteetse enlisted with a horse and Hartung said Kirwin resident John Reynolds deserted but eventually returned to the service.

Clark resident Rose Cox’s great-grandfather Solomon Fletcher Weathermon was one of the veterans discovered. He is buried in the Bennett Butte Cemetery in Clark, where Cox, 66, serves as a board member.

She said although she knew a few details about Weathermon’s life, it came as a complete surprise that he fought in the Civil War.

“When they told me that it just blew me away,” said Cox. “I wish I had been able to meet him.”

Weathermon was born in Kansas in 1845 and enlisted in the military at the age of 19 with the 51st Missouri Infantry. After serving his country, Weathermon returned west where he homesteaded in Warren, Mont., and Clark. The Weatherman Draw in south central Montana is named in his honor. He also helped found the cemetery where his wife Miranda Weathermon was the first person buried, Cox said.

“I thought that was pretty cool because I’m part of the cemetery,” she said.

There, he is joined by his grandson Lee Edwin Weathermon who was a Purple Heart World War II vet. Although she does not have official verification, Cox suspects her grandfather Christopher Weathermon was a WWI vet because he attended the Veterans Administration Hospital. If that is the case, three straight generations of men in her family fought in some of America’s most historic wars. Hartung said he also made contact with one other descendant family that lives out-of-state.

“They were just so happy,” he said. “It’s been really gratifying to do that.”

A similar set of plaques exist in the archives section of the Cody Library commemorating WWI vets. Hartung hopes this will be the final destination of the Civil War plaques.

Francik said his organization can’t be completely certain they’ve discovered every local Civil War vet, “but have done the best we could possibly do.”

As far as Revolution War vets, Hartung said very few made it west of the Mississippi River and none to Wyoming.

The chapter received assistance from the Meeteetse Cemetery District Board and Kathleen Holtzer. Hartung, Francik, Mike Bree, Bob Stevens, Jerry Behrens and Dan Wasp worked on the project for Sons of the American Revolution.

Sons of the American Revolution is a historical, educational and patriotic nonprofit corporation. The purpose of the society is to maintain and extend the institutions of American freedom; an appreciation for true patriotism; a respect for national symbols; the value of American citizenship; the unifying force of e pluribus unum that has created, from the people of many nations, one nation and one people. Membership is open to any male age 18 and older who can document his ancestry to a person in the American Revolution. For more information on each of the county’s known Civil War vets, contact Hartung at (307) 527-5384.