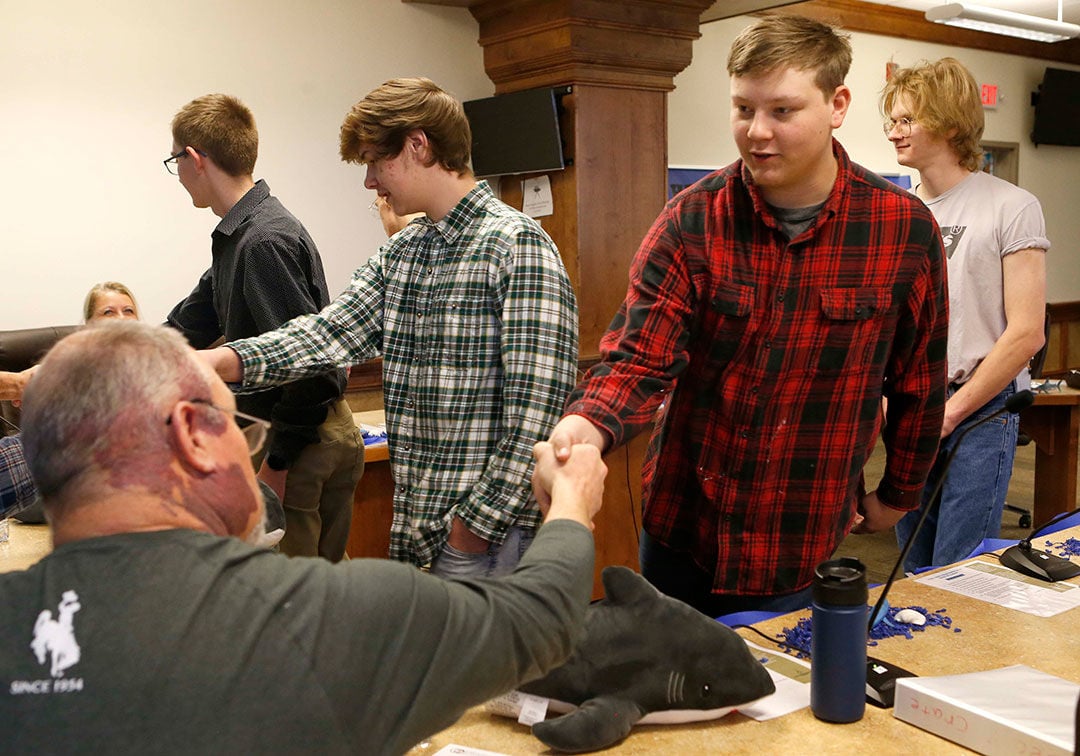 Hunter Loran (right) shakes hands with Fred Bronnenberg Jan. 30 in the Cody School Board room after his group received funding from the sharks to build their shed project. Also pictured are (from left) Joshua Deal, Dacota Hellyer and Caleb Murphy. 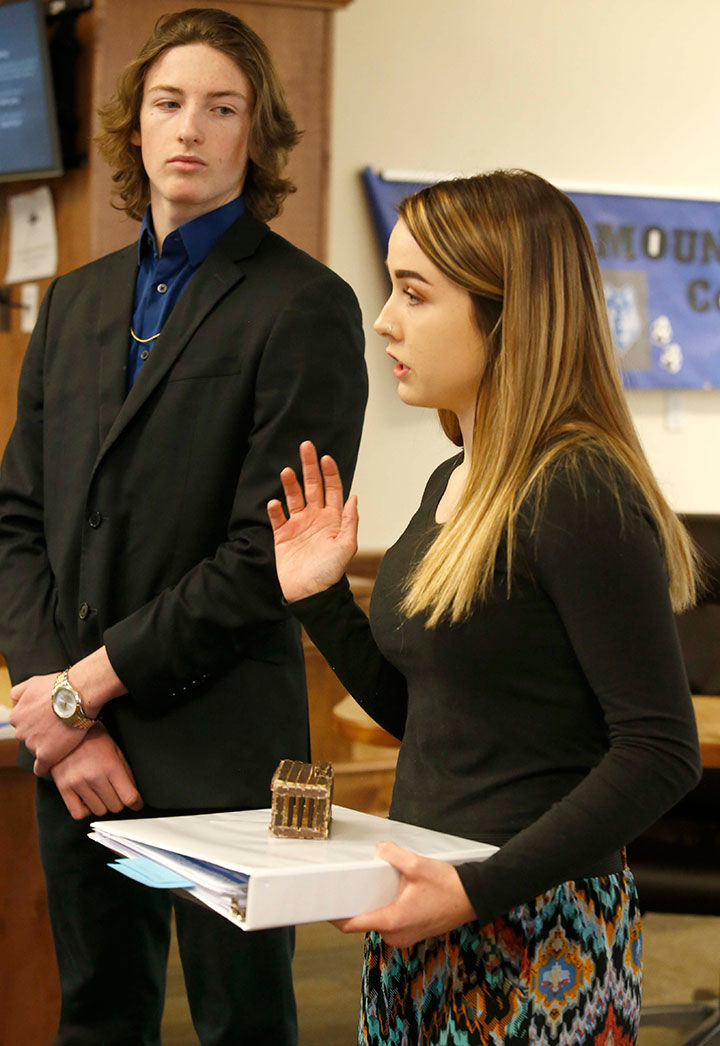 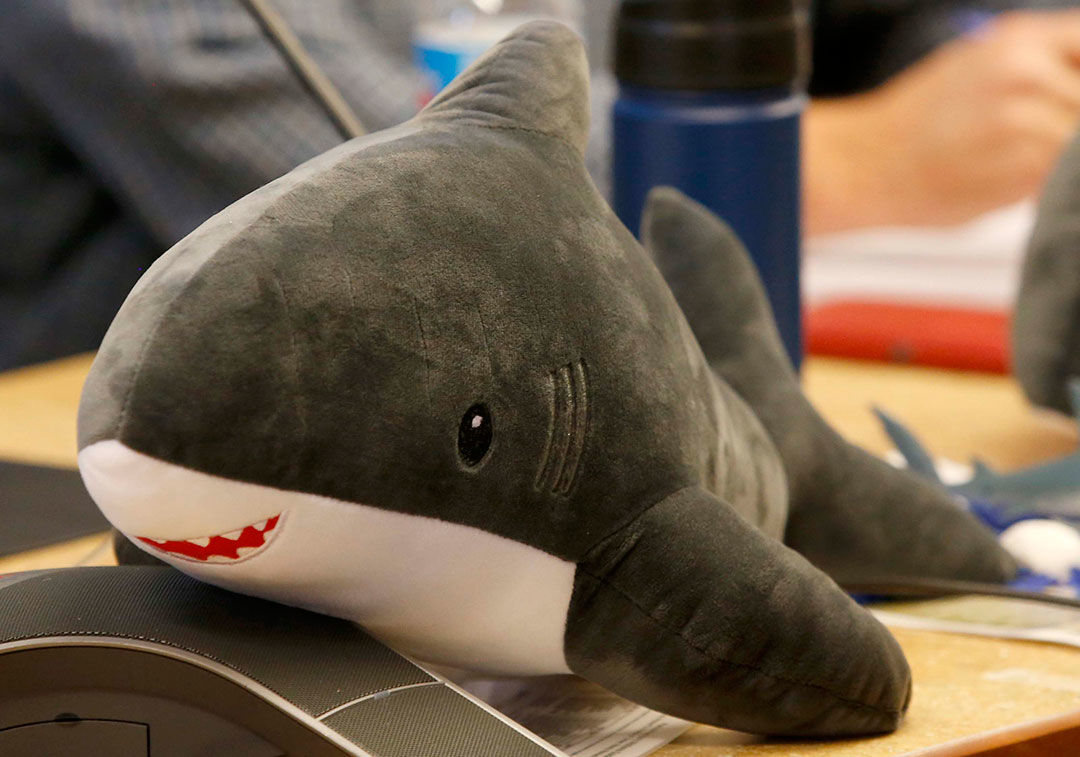 Stuffed and plastic sharks decorate the room during the event.

Hunter Loran (right) shakes hands with Fred Bronnenberg Jan. 30 in the Cody School Board room after his group received funding from the sharks to build their shed project. Also pictured are (from left) Joshua Deal, Dacota Hellyer and Caleb Murphy.

Stuffed and plastic sharks decorate the room during the event.

The premise of the reality show “Shark Tank” is simple – budding entrepreneurs get the chance to bring their dreams to fruition by presenting their ideas to the investor “sharks” in the tank, five titans of industry who have turned their own ideas into lucrative empires.

Using the show as a framework, Heart Mountain Academy science teacher Ben Larsen and math teacher Stephanie Gabriel challenged their students to create a unique idea for a shed or dog crate they would then pitch to community business people.

On Jan. 30 in the Cody School Board room, sharks Fred Bronnenberg, Tim Blatt, Doug Gail, Bobbi Moss and Suzanne Ruesch waited to hear the students’ ideas. There was real money on the table for the successful students.

Up first was The Shed. The group presented a customizable shed from 4-by-4 feet up to 16-by-16. Their goal was to build a quality shed at a good price.

“They’re just people, but it was kind of intimidating,” junior Dacota Hellyer said. “They seemed interested in what we were doing and some felt it was a nice idea to use a biodegradable plastic with flexibility in the wind.”

“We have some experience building sheds and have helped our dads do it,” Hellyer said of why they chose that project. “It’s a lesson we learned from our families.”

Unlike the show, the sharks wanted to see each presentation before making their offer so up next was the Wattage Cottage group with an idea for a customizable dog kennel/entertainment stand. It included a sound bar and sound proofing material inside. They asked for $1,200.

“We were just brainstorming and thought we could make an entertainment center as a dog kennel,” senior Sydni Charles said. “It was very intimidating (to present) and felt like a contest. But it was good for us and the school to get involved.”

The Wolf Den’s idea also was for a multipurpose dog crate that would also serve as a coffee table or side table. The group planned to donate 50% of its profits to the Park County Animal Shelter and asked for $380.

The last group to present was Dec-O-Crate. Those students planned to create decorative, customizable crates. The group didn’t have a firm price in mind, but eventually settled on $75 for one 3-by-3 food crate.

In preparation for their pitches the students treated their projects like a job, clocking in and out, and were “paid” at the beginning of each week.

“An accountant from each group creates a chart to show each company member’s contribution for the week within the group,” Gabriel said. “Students created employee contracts for each member of their group, and each member has an updated resume as well as blueprints, material costs, a company logo-slogan and an infomercial about their product.”

Before presenting in front of the sharks, the students shared their pitches with principal Beth Blatt that morning. The previous week they had presented to teachers Mark Landerman and Jim Collins.

“Mr. Landerman gave feedback to the students, which they in turn used to answer questions from the sharks,” Gabriel said. “As the days grew closer to pitching to the sharks, we were nervous for them to present, but overall I think each group represented themselves and the school very well. We are really proud of each group that swallowed the fear and anxiety to present to the sharks.”

After each group had been heard, the students then returned to barter with the sharks. The Shed was offered $1,500 from both Blatt and Bronnenberg with a 10% return on its investment.

“We expected them to barter with us but when they didn’t we accept the offer,” Hellyer said. “We were really happy. We didn’t think we’d get funded for that much.”

Dec-O-Crate was offered $200 from Gail, Blatt and Moss and $400 from Bronnenberg with a 5% return. Each group accepted their offers and will now work to purchase materials and begin building the projects.

The sharks said they were impressed with the work the students put into the projects.

“For their first time doing it they did a great job,” Tim Blatt said. “At that age to walk in to a bunch of adults and not just talk but sell them something is tough.”

HMA hopes to continue this program and in the future, with students creating their own ideas for products.

“This being the first year Ben and I choose for the students based on preliminary data gathered within the community,” Gabriel said. “We hope that the students will survey the community to find a need  and then hopefully design and market the product.

“It would be absolutely incredible if students found a product they enjoy creating and took it beyond the school walls, to continue making their product after the class is over. Perhaps begin their own business – that would be really amazing.”