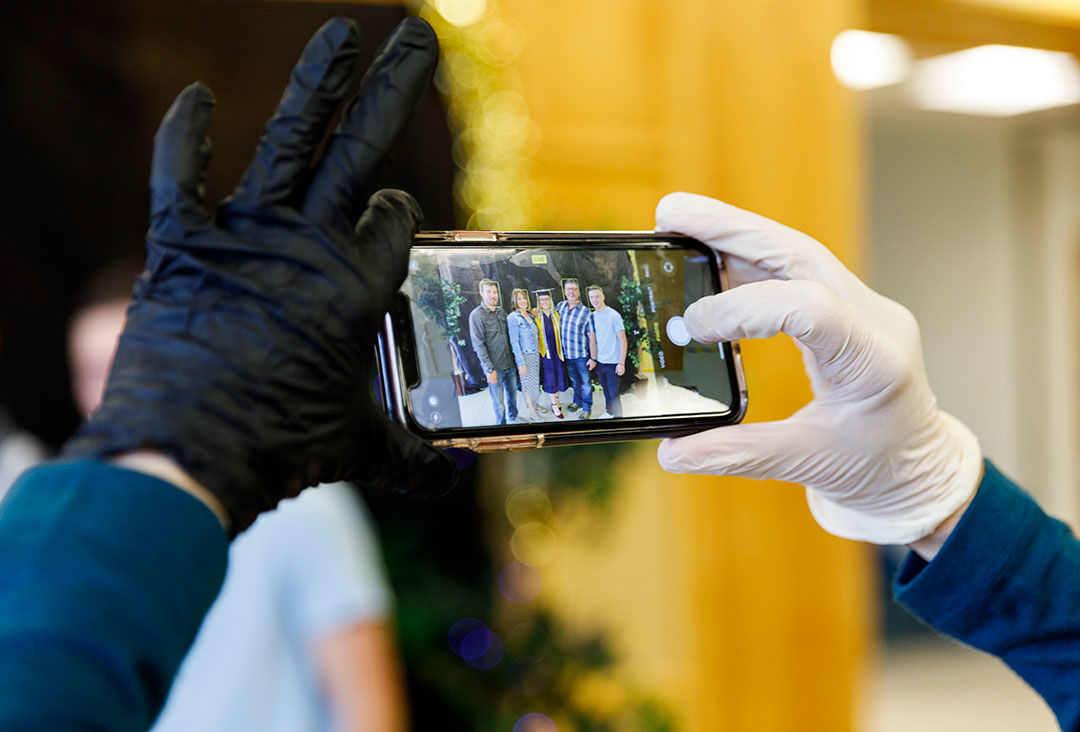 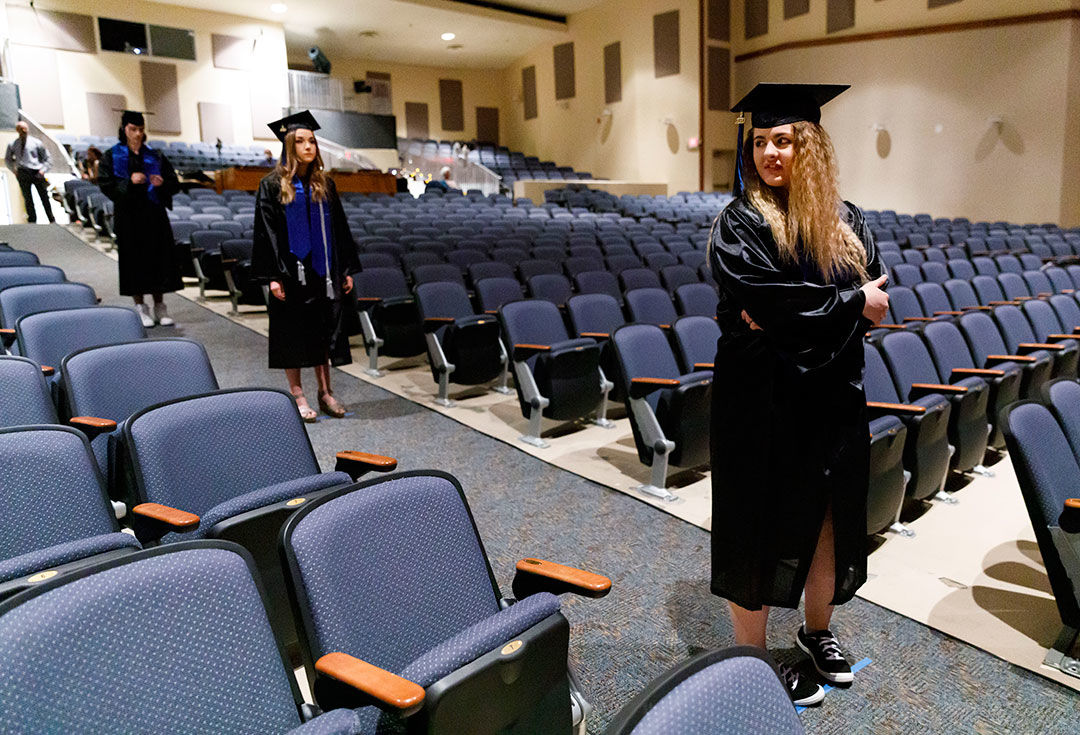 Sammy Clark (front to back), Sydni Charles and Gabe Erlenbaugh stand on markers to remain 6 feet apart before taking the stage for Heart Mountain Academy’s mock graduation ceremony at Wynona Thompson Auditorium on May 12. The ceremony was recorded and will be spliced together and released the morning of graduation. 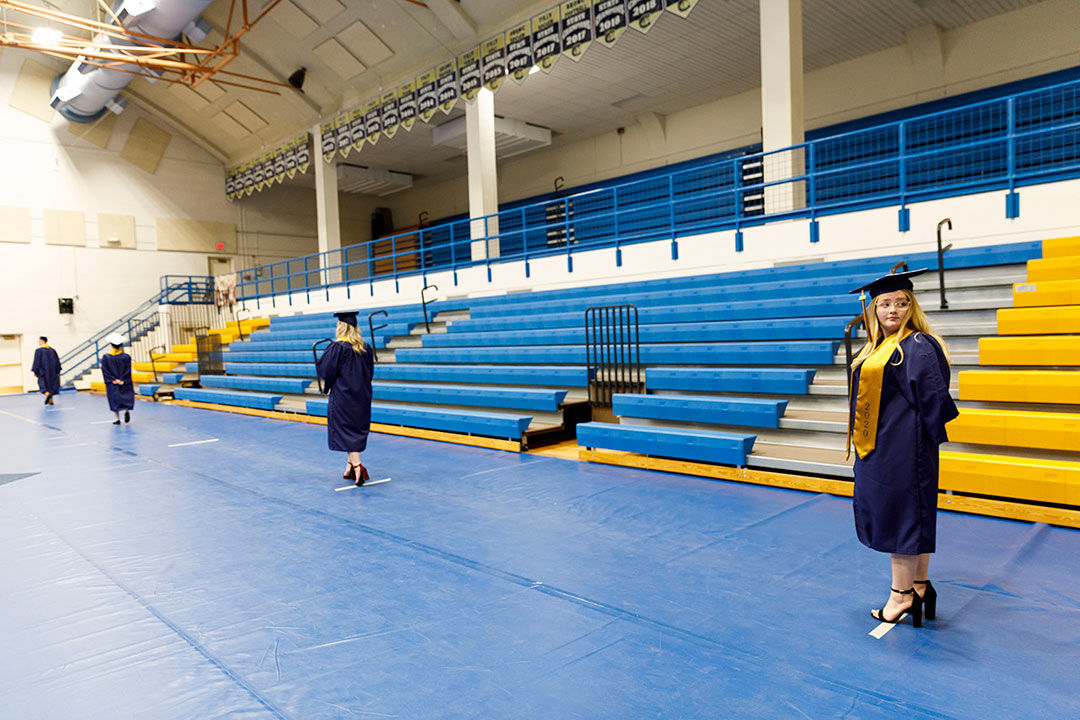 Kendal Vaughn looks back at her family while standing on a piece of tape on the floor.

Sammy Clark (front to back), Sydni Charles and Gabe Erlenbaugh stand on markers to remain 6 feet apart before taking the stage for Heart Mountain Academy’s mock graduation ceremony at Wynona Thompson Auditorium on May 12. The ceremony was recorded and will be spliced together and released the morning of graduation.

Kendal Vaughn looks back at her family while standing on a piece of tape on the floor.

The day after what would turn out to be the last day of class in March, Kaelee VanNortrick and her friends drove to Billings, talking about the latest news – Wyoming now had positive coronavirus cases.

“We talked about maybe not going back to school,” she said. “We didn’t think we’d be gone more than a month.”

Nearly two months later she walked back into the school for just a few minutes in her graduation robe and mortarboard hat to take part in a video to be aired the day of graduation, which will be a drive through town and require reaching from a car window for her diploma.

“It’s been a devious trimester,” she said.

Many seniors are still trying to process an unprecedented end to their K-12 careers.

As they walked out of Sweitzer Gym on May 12 with families in tow after the first step of a two-phase graduation process, many were still wondering what closure would look like.

He missed the time spent hanging out with his friends, participating in track and field.

Sandoval did see a silver lining though.

“For my kids’ graduation I’ll get to tell them what I went through,” he said. “It’s a learning experience and there are opportunities for everyone.”

Andy Scott also missed seeing the “diverse cast of interesting individuals” he would spend time with at school. He’s now headed to the U.S. Army to be a combat engineer.

Lainee Sperry didn’t have any classes to miss, she graduated early after the second trimester, but she still missed prom and the chance for a normal graduation.

“I was sad for the people still in school,” she said.

Sperry said getting to don her robes for a mock ceremony in the gym with her family did help.

Kaden Shirley said it kind of helped her as well, although she was still trying to come to grips with how much school time she had lost. A cheerleader, she had gotten sick after the state competition and missed what turned out to be the final week of school.

“I miss everybody in the mall together and talking,” she said.

Not everyone missed spring school classes and events.

“I was already (sick of) school anyway,” Edge Smith said. “I definitely had some senioritis.”

He said going back to the school for the mock ceremony reminded him he wasn’t quite done with virtual classes yet.

Van Nortrick had that reminder earlier in the day when she took an advanced placement test from home.

Going back to her high school that afternoon mostly made her frustrated. The closure meant she had missed a trip with her art class, prom and a play.

“This makes me feel a lot of what could have been was lost,” she said.