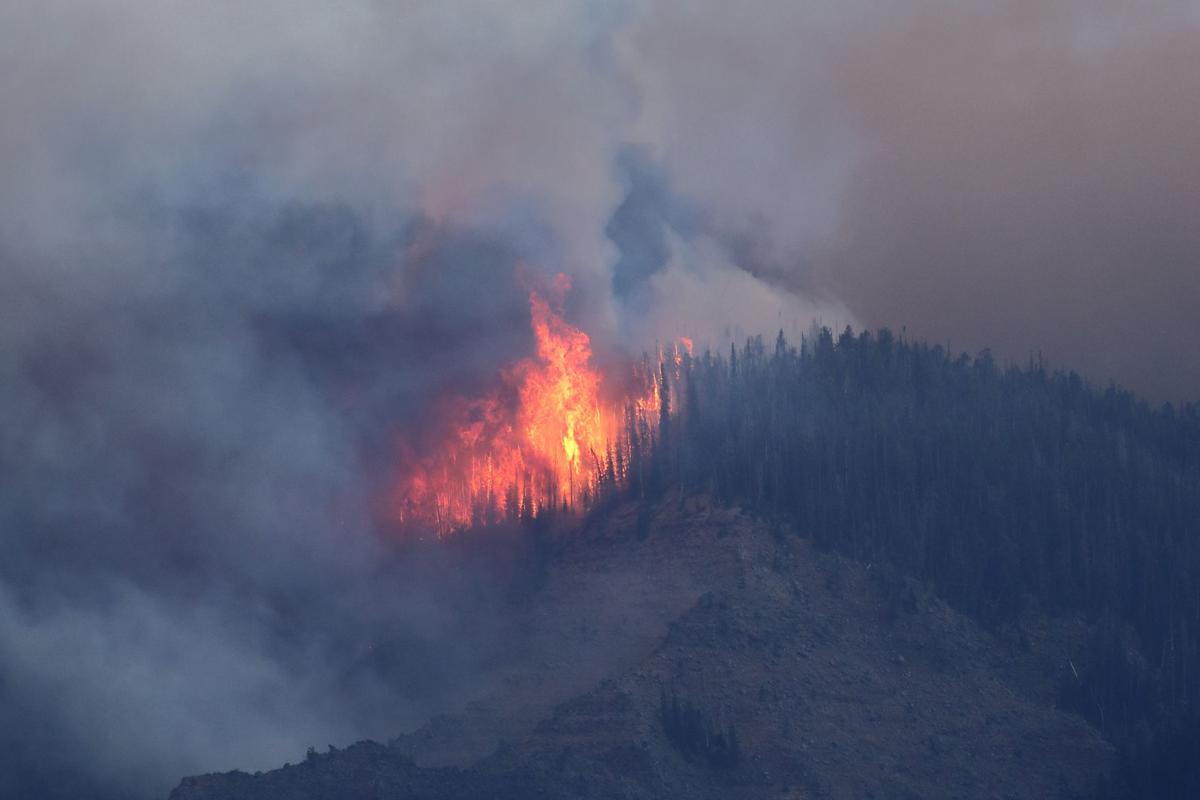 Flames from the Fishhawk Fire can be seen Monday. 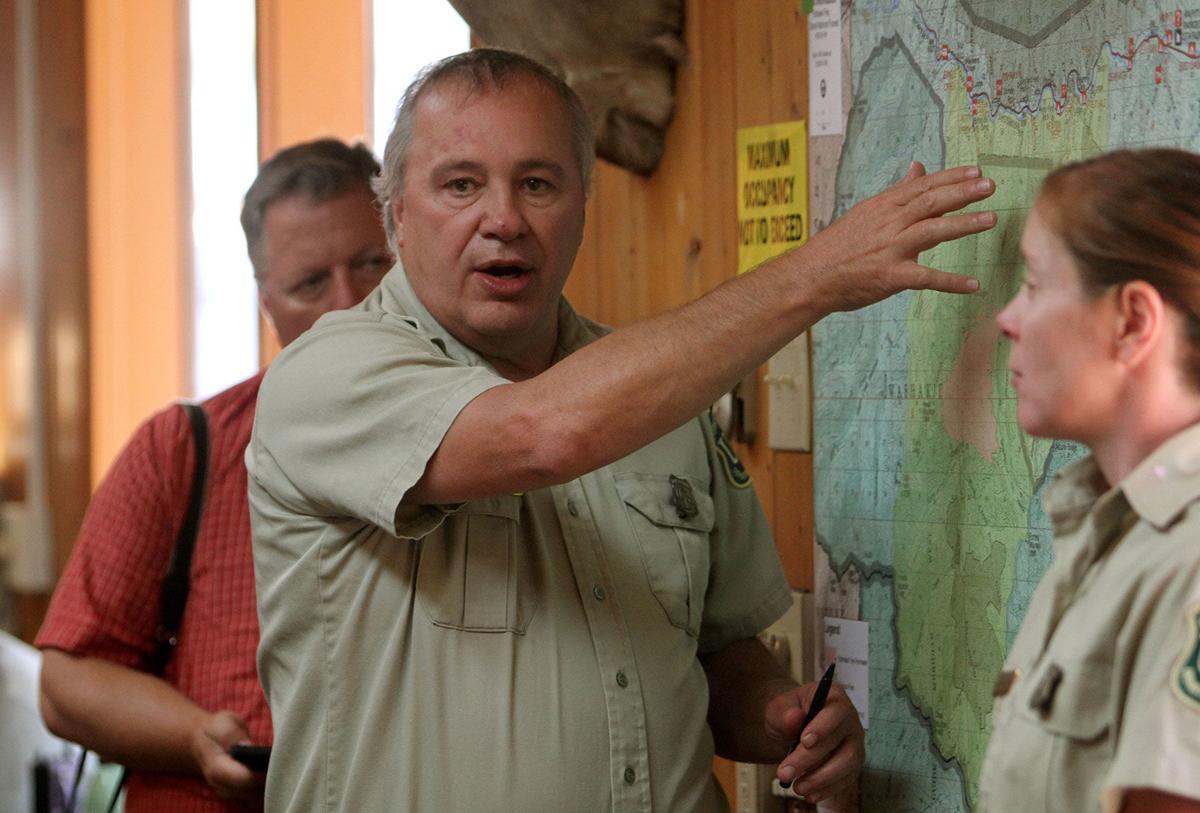 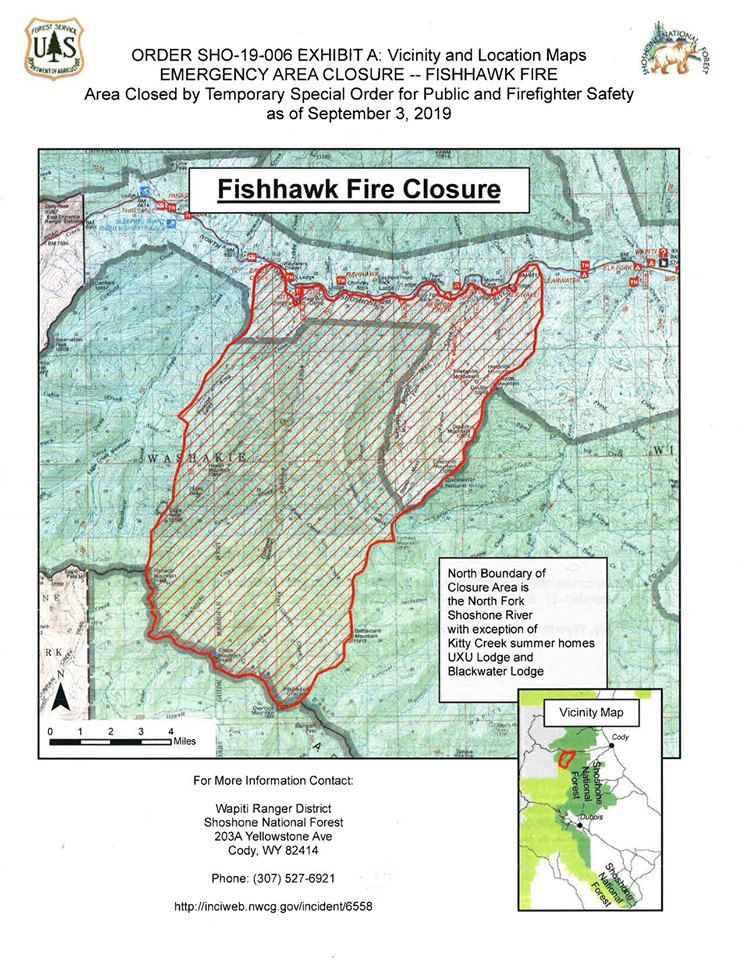 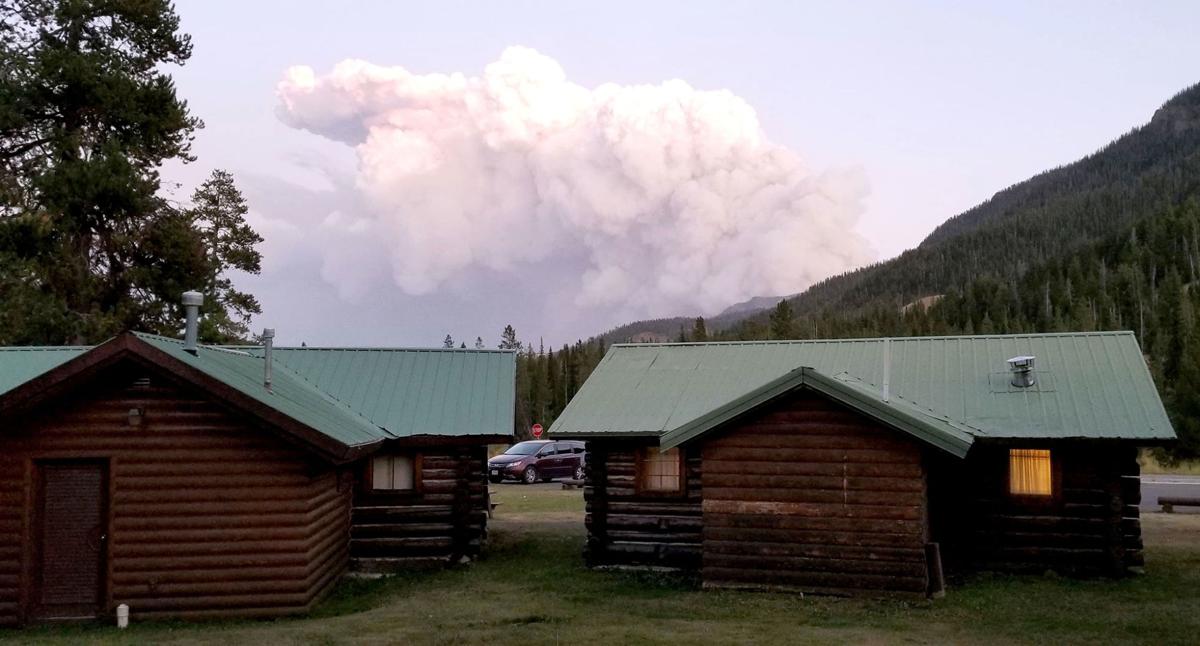 A view looking east from Pahaska Teepee Resort shows the smoke cloud from the fire. (Photo by Rob Coe)

Flames from the Fishhawk Fire can be seen Monday.

A view looking east from Pahaska Teepee Resort shows the smoke cloud from the fire. (Photo by Rob Coe)

A North Fork forest fire discovered Monday afternoon is continuing to burn with 4,581 acres covered with flames as of Wednesday morning.

What has been called the Fishhawk Fire – after the Fishhawk Trailhead near where it originated, 4 miles south of US 14-16-20 and about 40 miles west of Cody – is moving northeast.

After burning about 500 acres when initially discovered, that number increased to 2,000 acres by late Monday evening, and then doubled again by Tuesday afternoon, due to dry and windy conditions.

Currently, there are no direct fire suppression tactics being applied, but staff will continue to monitor the fire over the coming days. There are no structures at risk of being burned at this time.

“Appropriate actions will be taken when it is needed and where it is safe to do so with the highest probability of success,” said Giacoletto. “The amount of standing dead timber and the hazardous terrain in the vicinity of the fire makes it unsafe to put firefighters near the current location of the fire.”

Shortly before passing the Buffalo Bill Reservoir from Cody, thin smoke and haze was visible in the air Tuesday night. By Wednesday morning the haze had moved to downtown Cody, adding an ominous orange glow and strong smell of smoke to the air.

Shoshone National Forest staff held a public meeting Tuesday at the Yellowstone Valley Inn west of Cody in front of more than 60 attendees, explaining current details of the fire mitigation.

Giacoletto said many signs point to the fire being started by lighting strike about six miles south of U.S. 14-16-20 West, but could not officially confirm this has the cause of spark. He said there are numerous “spot fires” that are combining to create the current blaze.

“We’re going to suppress this fire when we can and where we can,” Giacoletto said.

At this time no structures are in immediate danger of being affected by the fire.

Harry Cummings lives on Jim Mountain about 18 miles by air from the fires.

“That ain’t that far, especially if there’s a 60 mph wind,” Cummings said.

He said fires that hit Jim Mountain in 2011 came as close as ¾ of a mile from his home.

“The flames just shot up the hillside,” Cummings said.

The closest structures to the fire at the moment appear to be the Blackwater Lodge and Newton Spring picnic site.

Wapiti residents Larry and Lynn Dickerson live about 1 mile from the national forest boundary. Although they are not fearing for their safety at the moment they said they have a prime view of the smoke clouds from their neighborhood.

“I was driving and just saw this huge column of smoke rising up,” Lynn Dickerson said.

From Tuesday night through Wednesday evening, out-of-area type 2 incident management team members were scheduled to arrive in the area to mitigate fire risks. Type 2 IMT respondents are typically dispatched in groups of 20-35 to handle incidents of regional significance. Due to a lack of wildfires nationwide at the moment, Giacoletto said there should be no issues recruiting more staff if needed.

These crews will work with National Forest staff to determine management action points where suppression tactics will be deployed and an incident command post will be set up at Buffalo Bill State Park. Timchak said her organization reached out to many different hunting outfitters and guides to alert them of the fire risk.

Timchak said if and when suppression actions take place they will be used from safer, more cleared ground, to keep the fire higher on the mountain side if it starts to approach structures. Giacoletto said this tactic helped fire suppression efforts during the 2017 June Fire when respondents utilized cleared underbrush. This scenario could replay again during this fire because of significant areas of cleared ground nearby, from past forest fire mitigation efforts dating back to the deadly 1937 Blackwater Fire.

“If we get an opportunity we’re going to take advantage of it,” Giacoletto said.

Rain was originally forecast for Tuesday but never occurred. Now that prediction has been pushed back to later this week with colder temps and rain expected to arrive around Thursday.

Kristie Salzmann, public affairs officer for Shoshone National Forest, said she expects it will take at least a month for the fire to become fully extinguished, unless a strong natural force like snow or heavy rain comes before that time.

Giacoletto said animals rarely perish in forest fires and usually move away from the flames on their own. Their habitat and immediate ecosystem may be destroyed but Giacoletto said the new vegetation growth that occurs after a forest fire is beneficial for wildlife in the long term.

He said to use caution when driving US 14-16-20 West and keep an eye out for signage alerting to where fire crews may be. If you live in the North Fork, try to remove all dead needles and dry kindling from your yard.

(Zac Taylor contributed to this report)