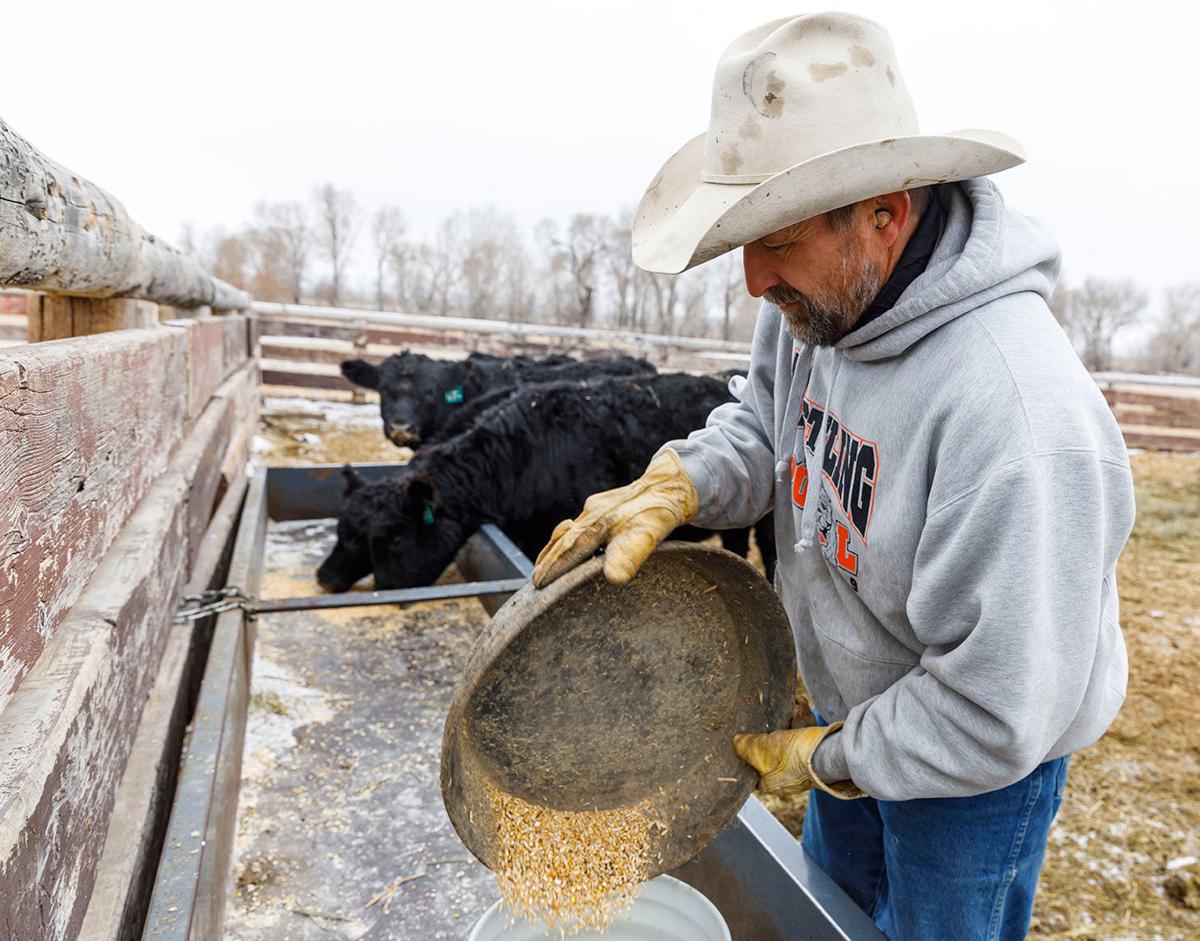 Lloyd Thiel feeds his cattle on his ranch in the Clark area on Friday. 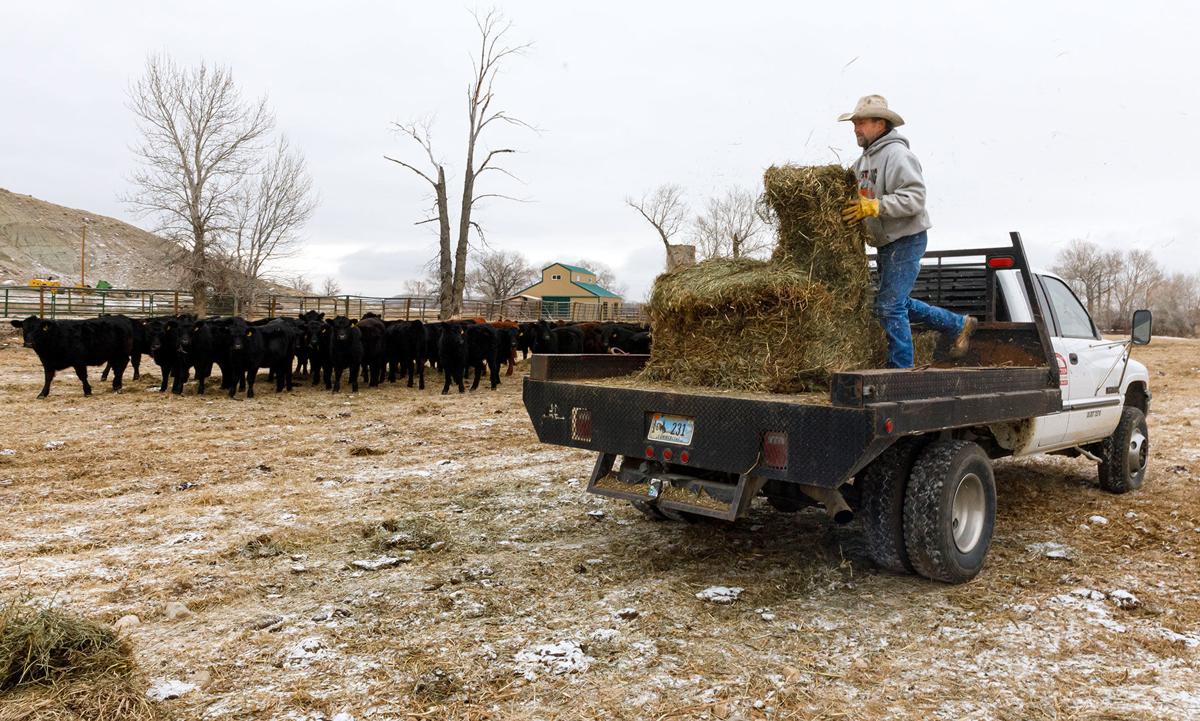 Lloyd Thiel feeds his cattle on his ranch in Clark on Friday.

Lloyd Thiel feeds his cattle on his ranch in the Clark area on Friday.

Lloyd Thiel feeds his cattle on his ranch in Clark on Friday.

Editor’s note: This a part one of a two-part series on country of origin labeling.

Many people may not know the labeling on their ground beef and pork may be misleading as to where it actually came from.

“The American public is being deceived as to what they’re really eating,” said Don Tolman, a Clark rancher.

Country of origin labeling was a requirement that existed in the United States from 2002-2015. The law required retailers to document on labeling where their fresh beef, pork or lamb came from. The law excluded processed meat but was expanded and strengthened in 2008 to include fresh nuts, fruits and vegetables and provisions for labeling products of multiple origins. COOL was not considered a safety, but rather a marketing, label.

Kent Bacus, senior director of international trade for the National  Cattlemen’s Beef Association, said it cost companies hundreds of millions of dollars to comply with this requirement and prohibited them from using creative branding.

In 2015 Congress repealed COOL for beef and pork because of a series of World Trade Organization rulings that pushed for prohibiting COOL labeling on products. The law continues for all other commodities. Now COOL labeling is strictly voluntary for any product undergoing any processing in the U.S.

“Why was it only beef and pork that were removed?” questioned Mike Schultz, Ranchers-Cattlemen Action Legal Fund United Stockgrowers of America COOL Committee chair.

Beef is the most imported meat into the U.S. with about 3 billion pounds annually. Pork is in second at 1 billion.

Schultz said his organization was not even allowed to attend U.S. Senate agriculture committee hearings related to the topic.

“We were the only group supporting mandatory country of origin labeling,” Schultz said.

After meat packers unsuccessfully sued to repeal COOL in 2013, Mexico and Canada filed a complaint against the WTO for the repeal of COOL labeling to beef and pork products in the U.S., citing discriminatory tactics against foreign livestock industries. With pressure mounting from the WTO, threatening $1.1 billion in tariffs, Congress voted to repeal within hours of those tariffs being enacted.

“The WTO has no right to tell us what we should do,” Tolman said.

Opponents of COOL say that it is a badly disguised trade barrier and insinuates foreign imported goods are inferior to domestic products.

“We can do a much better job marketing our product than the U.S. government can,”

They also said the law wasn’t wanted from consumers and fostered a false perception that imports are inherently less safe.

“We’re not seeing the marketing demand,” Bacus said, reiterating that COOL was not a safety labeling.

But a 2002 High Plains Journal study found that 96 percent of the 480 responders said they do care about country of origin labeling.

U.S. Sen. John Barrasso (R-Wyo.) told Tolman in a letter that fear of a retaliatory tariff response was also motivation for the repeal. U.S. Rep. Liz Cheney (R-Wyo.) also communicated with Tolman and said in a letter it would take too much money in labeling to discover where the meat is from.

“Saying you can’t trace it is a lame excuse,” Tolman said.

With the repeal, any meat that incurs at least minimal processing – cooking, salting, cutting or repackaging – within the United States, can be claimed to have been made inside the United States.

Foreign meat that is sold without any U.S. processing can still be labeled without any country of origin listed on the labeling.

“(Consumers are) essentially buying mystery meat without knowing the true origins,” said Bill Bullard, R-CALF USA CEO. “That choice should be an inherent right of consumers, to choose where that meat was produced and if they want to purchase the cheaper product, they should be offered that opportunity as well.”

Schultz said many meat packers solely add a brine solution to the meat to claim it as American-made but in some instances even less happens.

For example, processed meat imported from Mexico could garner this labeling simply by being put into a new package inside the United States, under the U.S. Department of Agriculture Food Safety and Inspection Service guidelines.

“What consumers are looking for is quality and price,” Bacus said. “Buying patterns don’t really reflect that (desire for COOL).”

“Their goal is seriously right now, to buy it cheaper abroad and sell it under the guise of a USA product labeling,” Schultz said. “The lack of competition gave them the opportunity to buy cheaper abroad and basically put one producer against another.”

But due to the ambiguous product labeling, no one can say for certain which companies are doing this, but the larger scale numbers at least create a clear picture as to what is going on.

Since COOL’s repeal, profit returns on calves have dropped by 71 percent and correspondingly, prices have dropped nearly 50 percent on the price per head of cattle for ranchers, Schultz said.

“It was a noticeable drop,” Clark resident Lloyd Thiel said. “People went out of business by the thousands and families sold farms and ranches.”

“There’s no possible way I could make a living on ranching alone,” Thiel said.

Bacus said this argument ignores the fact that prices were already dropping for several months before COOL was removed and that before that, prices were bloated due to a suuply drought in the southwest U.S.

COOL was cited as providing beneficial information to consumers during the mad cow outbreak in 2003, that involved mostly Canadian born cows. Today, it could still have an effect on local consumers as Mexico and other Central American countries have lesser standards and lack the necessary infrastructure to match America’s cattle production parameters.

The U.S. is the only country that requires a veterinarian certification in order to serve antibiotics to cattle and every cow slaughtered here must be done under USDA guidelines. This includes hanging a carcass for five days at a 38-degree room temperature.

“The (local) producer is being forced to compete in the global marketplace with their hands tied behind their backs,” Bullard said.

A number of countries including the U.S. prohibit organic labeling if an animal received antibiotics, but in Mexico and Central America no such rule exists.

With foot and mouth disease found in the largest beef exporting country, Japan in 2010, and South Africa this fall, there’s always a chance this viral disease could spread into U.S. borders.

Although FMD is rare among humans with no documented cases since 1966, entrance of the disease into American borders would be a very dire scenario for agricultural producers as its containment requires significant vaccination and quarantining, in addition to risks to other wildlife.

“What happens if you get it in the elk? Thiel questioned. “Then tourism would go down.”

In recent years, many pro athletes tested positive for the steroid clenbuterol, a growth hormone found in Mexican beef. In 1997, feeding blood and meat scraps within feed meal was made illegal in the U.S., but in many parts of the world this practice still exists. Tuberculosis was also recently spotted within the Mexican dairy industry.

“If we get a disease outbreak it’s going to cripple this country,” Schultz said.

Pulling out from COOL was one of the biggest examples of deregulation to occur in the management of foreign imports in U.S. history. Even in 1930, with the passing of the Tariff Act, it was stated the customer must be informed of the country of origin, although this law considered significant processing to qualify a product as USA of origin.

Bullard said he and his constituents approached President Donald Trump’s administration about reinstating COOL in the new North American Free Trade Agreement and were met with support at first. But after a few months of legislating, he said they were told by cabinet members there was too much push back from powerful meat industry lobbyists and the USDA to overcome.

“We’re up against a powerful meat packing lobby that does not want consumers to know the true origins of the beef in their grocery stores,” Bullard said.

U.S. Sen. Jon Tester (D-Mont.) has recently drafted a bill that would fully reinstate COOL for beef and pork. SB 391 was referred to the Committee on Agriculture, Nutrition, and Forestry on Oct. 31.

U.S. Sens. Mike Rounds and John Thune also introduced a similar bill in October. That bill, called the U.S. Beef Integrity Act, would outlaw disingenuous “Product of U.S.A.” labeling, but only to beef born, raised and slaughtered in the U.S, still excluding pork.

The Montana Farmers Union and U.S. Cattleman’s Association have both supported the bill.

If cattle ranchers had to pay the full cost of their production without subsidies for the water and graze, or did not have a wealth of tax breaks , the cattle industry as we know it would collapse. Taxpayers keep ranchers viable. The cattle producer business model cannot stand on its own. Rancher- County Commissioner Thiel admits as much. Overall, western cattle ranching subtracts from the tax base, not adding to it. It is not the 19th century any more . COOL labeling or the lack of it will not change any of that.

I must respectfully disagree with deweyv. I do all of the shopping for my family and I am a very discriminating shopper, I look at every label for country of origin and manufacturing origin and COOL does in fact impact my buying decisions. But along with that I believe it is critical the USA peod

(Didn't finish) All USA products be as competitively priced as possible, price does affect my buying decision as well