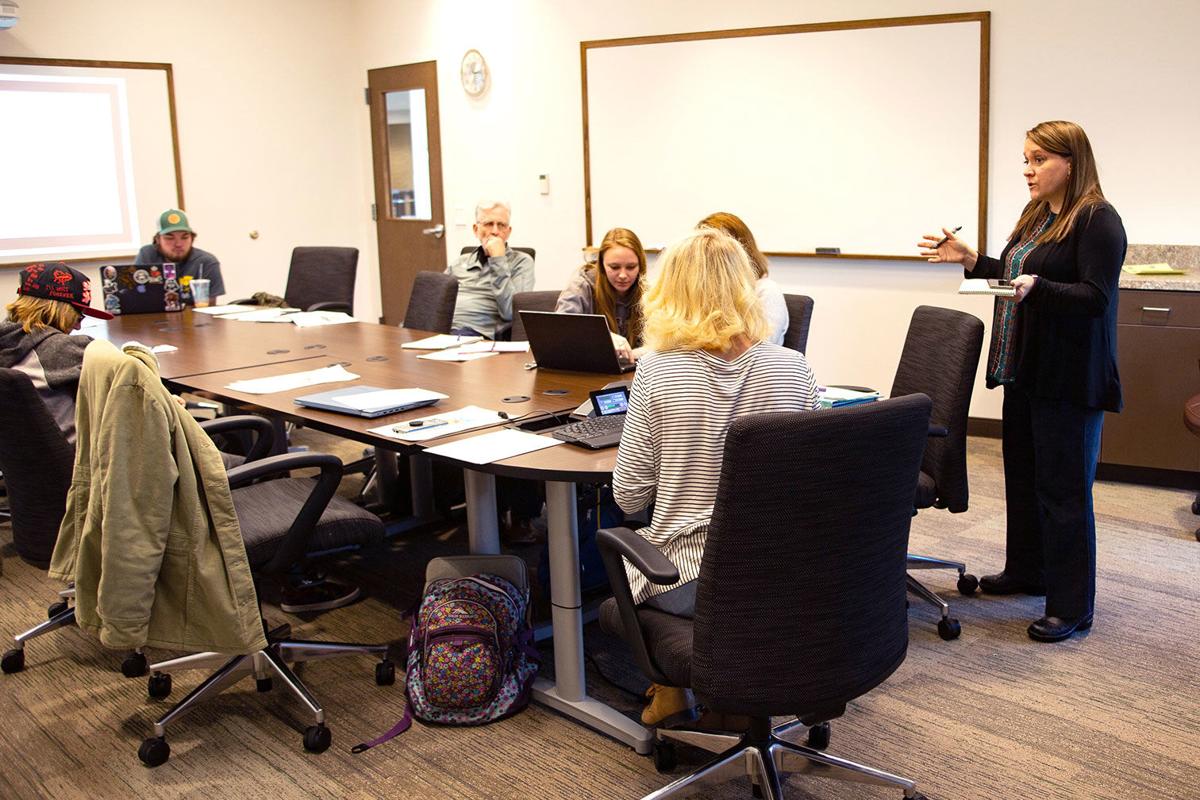 Northwest College instructor Amy McKinney’s Women in the West class practiced their presentations that they’ll each give at the Dec. 10 event. (Courtesy photo)

Northwest College instructor Amy McKinney’s Women in the West class practiced their presentations that they’ll each give at the Dec. 10 event. (Courtesy photo)

Karen McWhorter, curator of the Whitney Western Art Museum, is inspired by each of the women portrayed on the walls of a Buffalo Bill Center of the West gallery.

The “Women of Wyoming” exhibit by Jackson photographer Lindsay Linton Buk is a tribute to what women are still accomplishing 150 years after initially getting the right to vote in what was then the Wyoming Territory.

The 150th anniversary has provided impetus for organizations around the state to highlight women who have made a major impact in the state from those early years to now.

Tuesday night a class of Northwest College students will give presentations on many of those early pioneering women in the territory and state.

“The students are excited to be part of the larger statewide celebration,” professor Amy McKinney said. “This anniversary is a momentous event in our state’s history, and I am especially excited that we can hold this celebration on the specific date of the passage of the suffrage bill.”

The Women in the West hosted event is 7 in the Yellowstone Building Conference Center.

One of the women being featured was a teacher at Heart Mountain incarceration camp.

Others include Minnie Corum, the postmistress at Encampment starting in the 1920s; Lilian Ethen Boulter, a rancher in the Pinedale area in the 1930s; Rosemary Quinn, an elementary teacher in Cheyenne; and Phyllis Letellier, a Wyoming humor writer in the 1980s who wrote a column about life on her family farm near Greybull.

It’s a cross section of women filling many roles around the state in varying eras, as the museum display features modern women from a range of generations and in a wide variety of fields.

As far as the portrait gallery is concerned, McWhorter said a couple women in particular inspire her as they are also of a younger generation and have done great things, including operating a dude ranch.

The gallery also includes locals like Northwest College professor Aura Newlin and Ann Simpson, the wife of Sen. Al Simpson who has taken on a number of causes in her own right through the decades.

“Every visitor can find inspiration in each story,” McWhorter said. “One or two will really speak to each.”

Finding inspiration in Wyoming women who have come before is nothing new. In the 1940 Cody Enterprise, local woman Jesse Britton spent a night at a banquet taking on the appearance of Esther Morris, a South Pass women who worked to allow the vote of women in the then territory of Wyoming.

Britton quoted Morris’ famous push to get all candidates running in a key Wyoming election to agree to grant the territory’s women full suffrage if elected.

“No other star in our flag will ever be so bright as the 44th – the star that gave women her rightful place in the world,” she had said. “My work was laid out for me. I must do my duty for the women of my timer and the future.

“God, the country and a few brave men were with me. This was my chance.”

The work paid off, with the territory granting women’s suffrage. When Wyoming was up for statehood more than 30 years later, one key aspect was that it would still be able to provide women full suffrage.

Now that’s come full circle. A couple of Buk’s many portraits are women politicians, including the first Native-American woman elected to the state legislature.