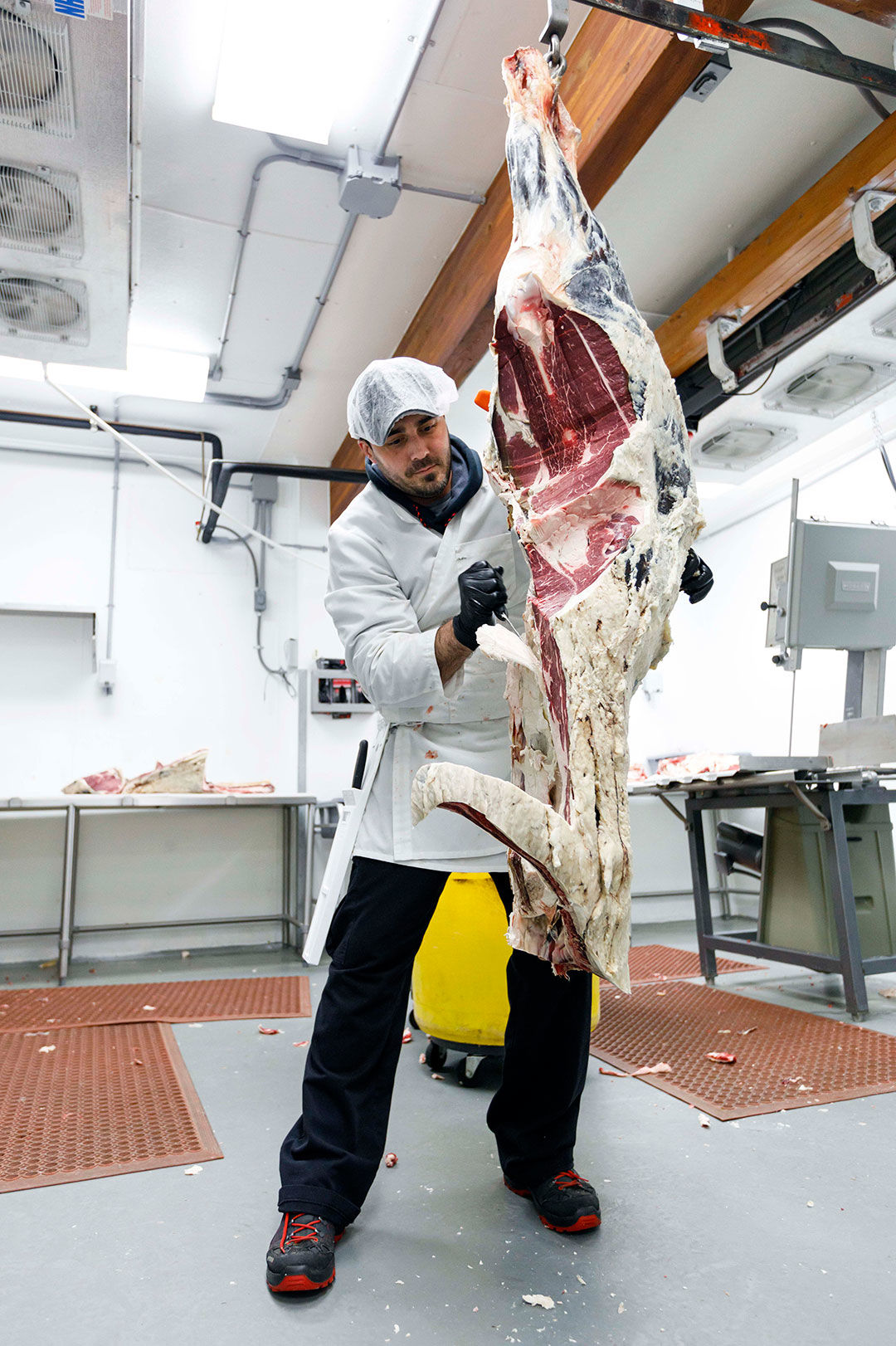 Production manager Ben Colling trims beef at Wyoming Legacy Meats on Tuesday. The company gets its meat from local ranches and can use the Made in USA label. 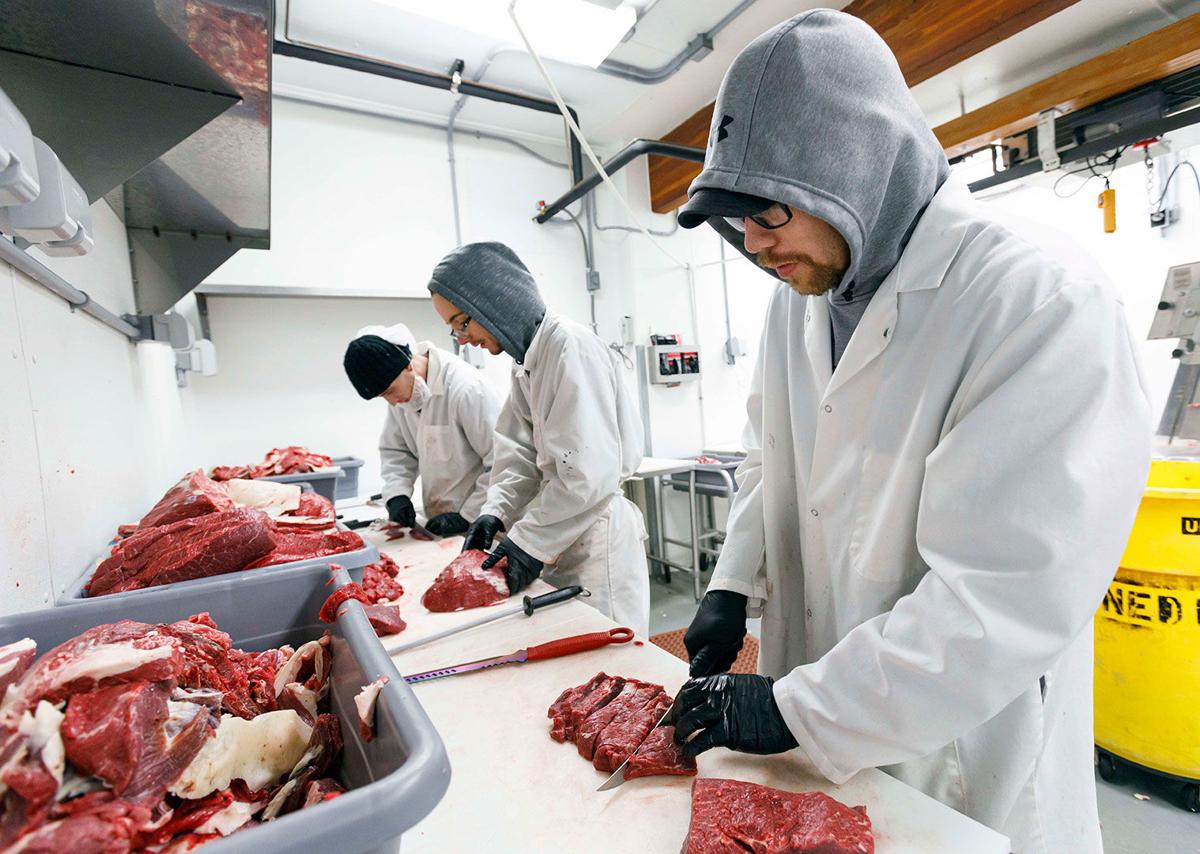 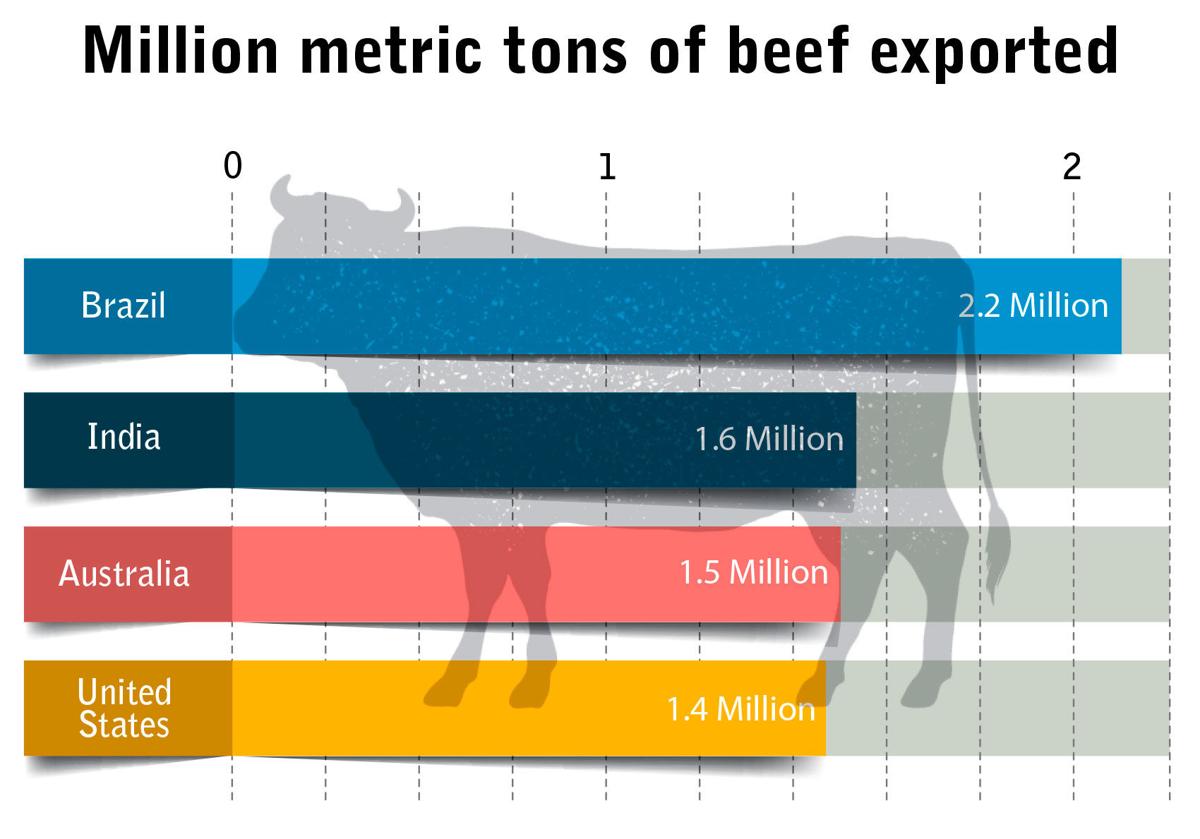 Production manager Ben Colling trims beef at Wyoming Legacy Meats on Tuesday. The company gets its meat from local ranches and can use the Made in USA label.

Editor’s note: This is part two of a two-part series on country of origin labeling.

Don Tolman, 83, is the third generation of a family of ranchers with roots as deep as the many trees that dot his Clark property. His grandfather John Tolman first set foot on the land around the turn of the 20th century, after coming west to be a ranch foreman. Unlike him, Tolman cannot afford to live solely off ranching.

“The cattle business does not pay the bills anymore,” he said. “It used to, but it doesn’t anymore.”

Local ranchers have been hit with a number of hurdles in recent years, including the repeal of part of a law that had required country of origin labeling on beef and pork.

Country of origin labeling has existed as a requirement in the United States since 2002. The law requires retailers to document on labeling where their fresh beef, pork or lamb came from. The law excludes processed meat but was expanded and strengthened in 2008 to include fresh nuts, fruits and vegetables and provisions for labeling products of multiple origins.

But in 2015, Congress repealed COOL for beef and pork because of a series of World Trade Organization rulings that pushed for prohibiting COOL labeling on products. The law continues for all other commodities.

“It’s amazing to me that country of origin labeling is waived for beef and pork, but not for fresh nuts, fruits and vegetables,” said Zach Buchel, owner of local produce company Farm Table West. “We are currently required to include the country of origin on our invoices to let customers know where imported products came from.”

Ashley Garrigus, a department spokesperson, would not speculate or comment on the need for any changes to the laws.

“They should be told the truth as to what they’re eating,” Clark rancher and county commissioner Lloyd Thiel said. “There is a definite trend where people want to know where their food is coming from.”

According to the USDA, there are 76 percent more local farmers markets since 2008.

A complicated aspect to the COOL dispute is it is impossible to officially determine which companies are taking advantage of the more lenient labeling standards.

One likely suspect is Brazilian-based JBS, which has its U.S. headquarters in Greeley, Colo. and is America’s second largest beef packer. JBS purchased Cargill’s pork operations in 2015 and is now considered one of the world’s largest meat packers. The company purchases beef from in and outside the country for processing.

However, the foreign presence in the U.S. beef market still weighs heavily and generally lowers prices.

Representatives from Tyson and Cargill declined to comment for this article.

The U.S. has become increasingly dependent on foreign countries for its meat consumption needs in recent years, with about 8 percent of all beef sold in the U.S. imported in as of 2018, up 2.8 percent from 2011.

A 1999 United States International Trade Commission report that analyzed live cattle trade with Canada and Mexico, found that, “the record suggests that even relatively small volumes can have significant price effects in the price-sensitive market.”

Per-head cattle prices have dropped nearly $1,000 since the repeal of COOL in 2015, Schulz said.

“People went out of business by the thousands,” Tolman said.

With 31.8 million cows being raised for beef production in 2018, that’s a $31.8 billion annual decrease in revenue. On a local level, Thiel estimates there are about 200 cattle producers in Park County. If each of these local farmers raised the American average of 43 beef cows, Park County is garnering $8.6 million less in cattle revenue since COOL was revoked. This in turn then affects every local resident, in that less tax revenue is being brought to the county.

NBPC, although not in that big four, is 51 percent owned by Brazilian stakeholder Marfrig.

“It allows corrupt middlemen to buy cheap foreign meat and sell it at American prices to an unsuspecting public,” Tolman said, referring to the international meat packers and congressmen who voted to repeal COOL.“They’ll start buying more of these ranches at farm-sale prices and then once they get control they’ll have it all.”

Over the course of the last century, ranching and farming has transformed. There has been a reduction of 476,000 U.S. farms since 1982 and 85,000 cattle feeders since 2004. Yet, the public desire for beef has not waned.

“The world population is huge – people have to eat,” Thiel said. “Ranching produces that.”

A look at foreign and U.S. domestic stock size also tells part of the tale.

The American cow population of 93.5 million is dwarfed by the herd size of other countries like Brazil which boasts 226 million. There, more than 111 million acres of deforested Amazon is now home to cattle pasture.

The vast majority of beef imports to the U.S. are lean trimmings. In 2019, Brazil exported 2.2 million metric tons of beef, while the U.S. was the world’s fourth largest exporter at 1.4 million.

When it comes to small-scale cattle producers these days, profit margins are already razor thin.

Thiel said his business brings in about $140,000 in gross revenue per year, but after paying all the costs associated with running his business, he only brings in a small profit. His construction company is his main money-making enterprise.

“I pump money into this deal, it’s not like it carries its own weight,” Thiel said. “The margins are too small for the risk you take.”

For someone who does not have a large investment to start cattle ranching, the startup costs are a nearly impassable barrier to entry.

“You have to get a loan, land and equipment to start ranching and if you don’t have two of the three you don’t have a chance,” Lloyd’s daughter Breanne Thiel said.

She said she would love to follow in her father’s footsteps, but isn’t confident that dream will ever come to fruition.

“It’s a way of life,” Lloyd Thiel said. “There is nothing more rewarding than being able to raise a calf. It’s not about the money. It’s about being who you are and doing what you like.”

On Tuesday, the National Cattlemen’s Beef Association announced it is planning to work with USDA to seek solutions for labeling requirements and verification procedures for beef products labeled as “Product of the U.S.A.,” “Made in the U.S.A.” to better serve producers and consumers.

A representative from the North American Meat Institute said it would also support this project.

But Vaughn Meyer, a member of Ranchers-Cattlemen Action Legal Fund, said in earlier literature, NCBA receives 82 percent of its funding from the $1 per head that is assessed at the point of cattle sale for the Beef Checkoff program, which he said has given the organization a preference towards meat packers.

“NCBA has managed to get the majority of all that (checkoff) money and not really help the producers,” Lloyd Thiel said. “More for the packers than the actual producers.”

U.S. Sen. Jon Tester (D-Mont.) recently drafted a resolution that would fully reinstate COOL for beef and pork. S. Res. 391 was referred to the Committee on Agriculture, Nutrition, and Forestry on Oct. 31.

“I think it’s an excellent idea,” Curt Bales of TE Ranch said, who owns 500 head of cattle. “People need to know where their sourcing their meat from.”

U.S. Sen. John Barrasso (R-Wyo.) told Don Tolman in a letter he will consider Tester’s bill, but it was Barrasso who voted to repeal COOL as part of the government’s 2016 omnibus funding bill.

“Ultimately, I believe it’s important for consumers to have reliable information about their food,” Barrasso wrote in the letter.

Barrasso voted to repeal COOL, a Republican taking the side of a big corporation to the detriment of public health? I'm not surprised.