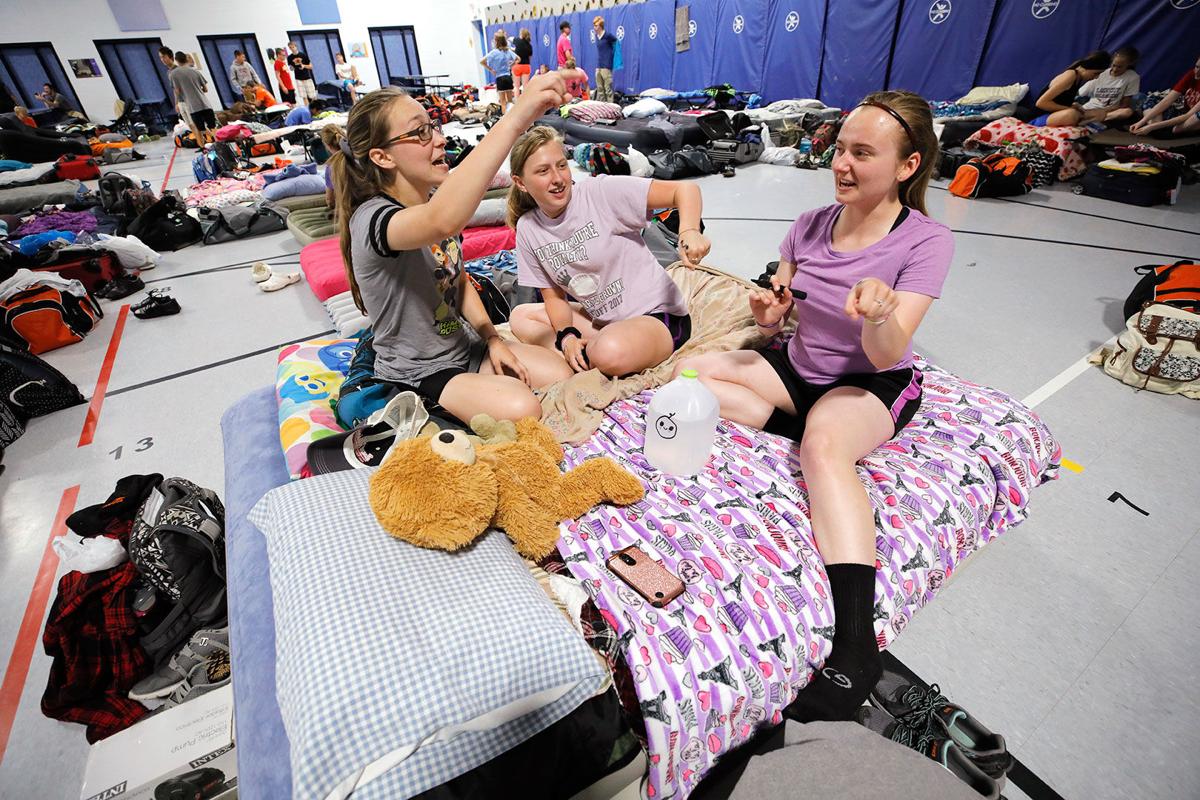 Lake City, Minn., band members (from left) Ellie Lidow, Elle Siewert and Ari Carlson talk before bed Monday. The band was here to perform in the Stampede Parade and stayed in the Eastside School gym. 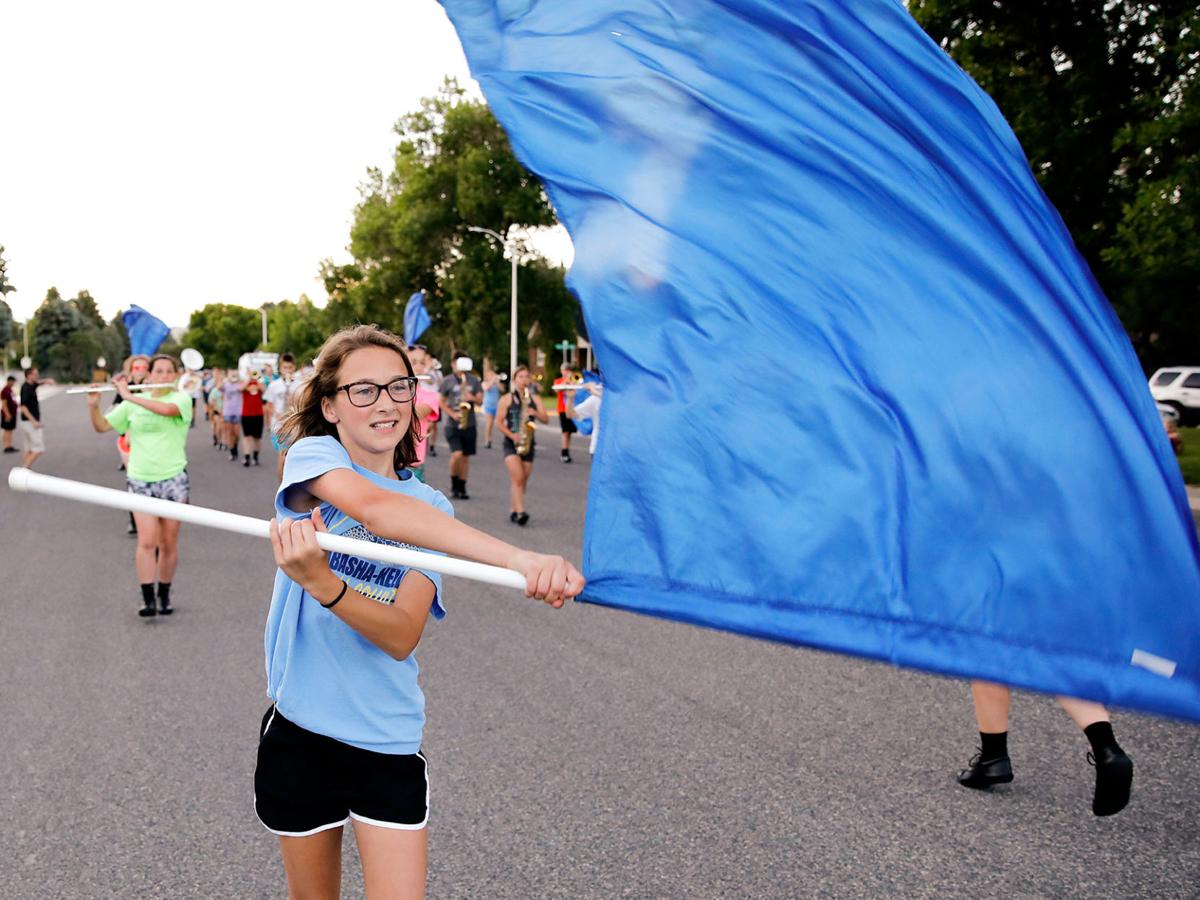 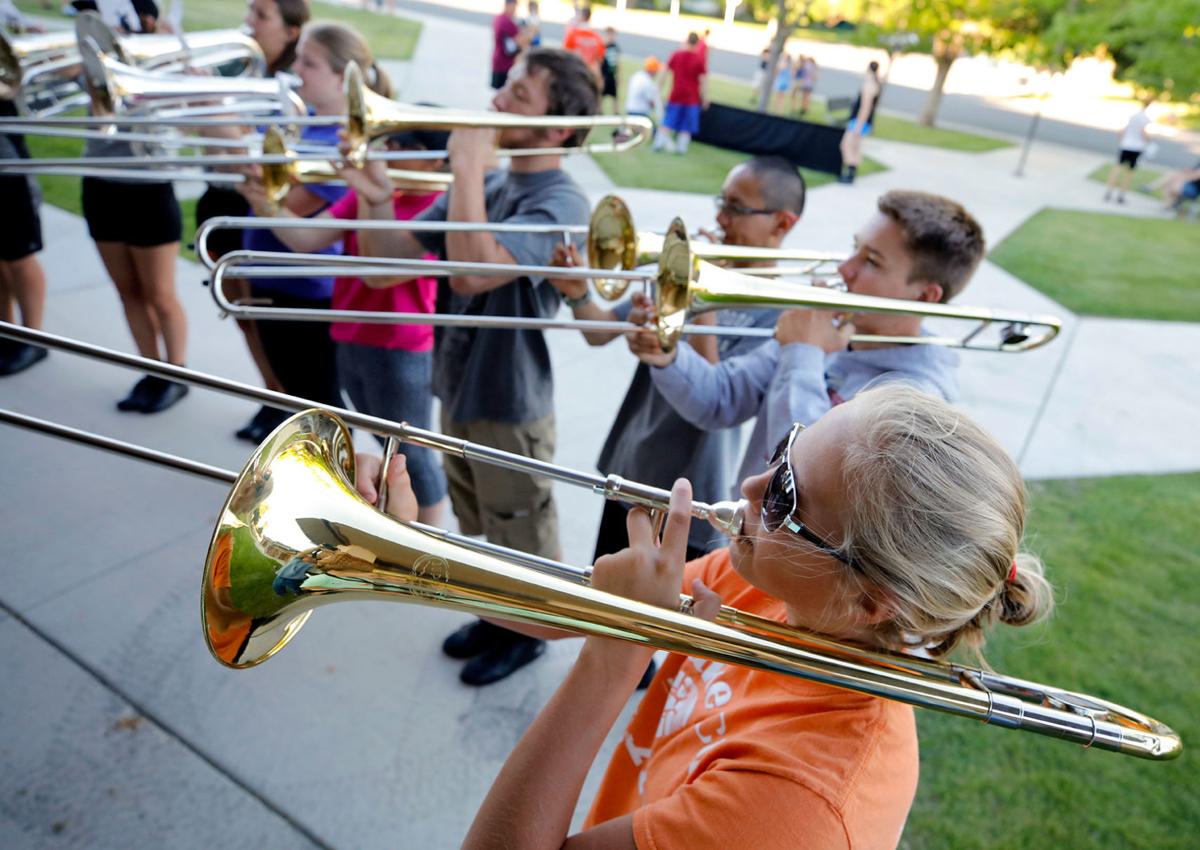 Hailey Ruckmann plays trombone with members of the band during practice Monday at Eastside School.

Lake City, Minn., band members (from left) Ellie Lidow, Elle Siewert and Ari Carlson talk before bed Monday. The band was here to perform in the Stampede Parade and stayed in the Eastside School gym.

Hailey Ruckmann plays trombone with members of the band during practice Monday at Eastside School.

Coming to Cody all the way from Minnesota, the Lake City Tigers marching band took part in the Stampede parade on July 3 and 4.

The band is comprised of 77 students in grades 8-12. The musicians’ skills have been honed over the course of the school year and are now being applied to an eight-day tour of the Midwest. Band director Paul Holland said Minnesota marching bands such as Lake City’s have an added incentive to perform well.

“Minnesota has something very unique in that, in the month of June, we have a competitive parade band circuit,” he said. “Not only do we entertain crowds, we also compete with each other before accredited judges.”

The Tigers appeared in 12 parades during the first 20 days of June. In seven of those parades, the Tigers secured the top spot in the judging.

The band was looking forward to visiting Cody and the surrounding region.

“We were there about five years ago and it was a wonderful experience from a number of angles. We love the cooler weather, the attraction to the national parks around Cody, and the fact that there’s two parades,” Holland said. “We love your town.”

The group is performing together from late May until early July, either practicing or playing nearly every day. Ari Carlson has played a large part in those rehearsals this year.

One of the seniors in the band, Carlson is a commander, keeping the band on time with hand signals and directing the marching. A member of the marching band since seventh grade, Carlson is pursuing instrumental music education in college.

“I love seeing the silliness and creativity that the group brings every year,” she said.

For their summer circuit, the band is playing the music of “Wicked,” and “How the West was Won.”

When the trip is done the Tigers will have seen quite a bit of the West, visiting notable sites such as Mount Rushmore, Yellowstone National Park and Devil’s Tower.

Jaxson Kohrs is spending his first summer with the band. He can be found behind a trumpet in the brass section.

“I’m kind of new to music,” he said. “I’m just looking forward to travelling and playing with the band. It’s been great so far.”