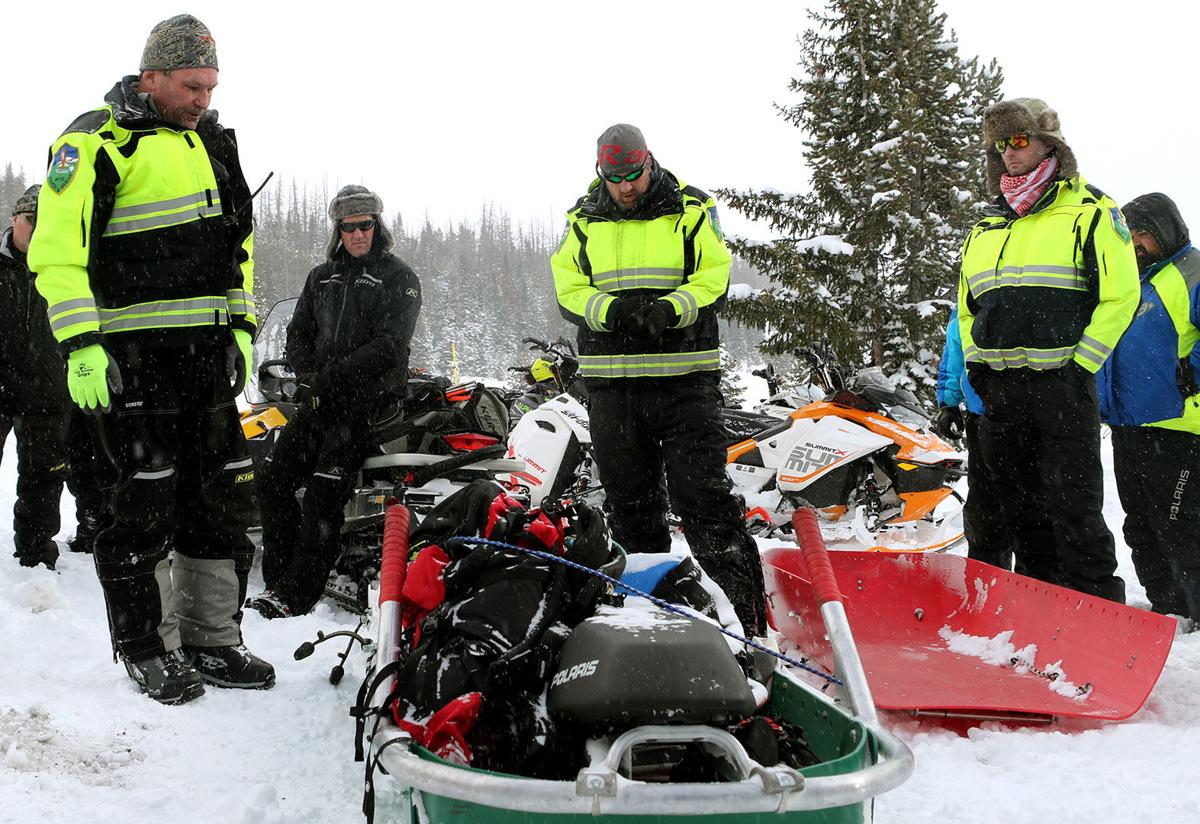 Park County Sheriff Scott Steward, Bill Brown and Mike Paulson stand with others around the Park County Search and Rescue toboggan used for winter rescue efforts during an avalanche training clinic Jan. 11 in the Beartooths. 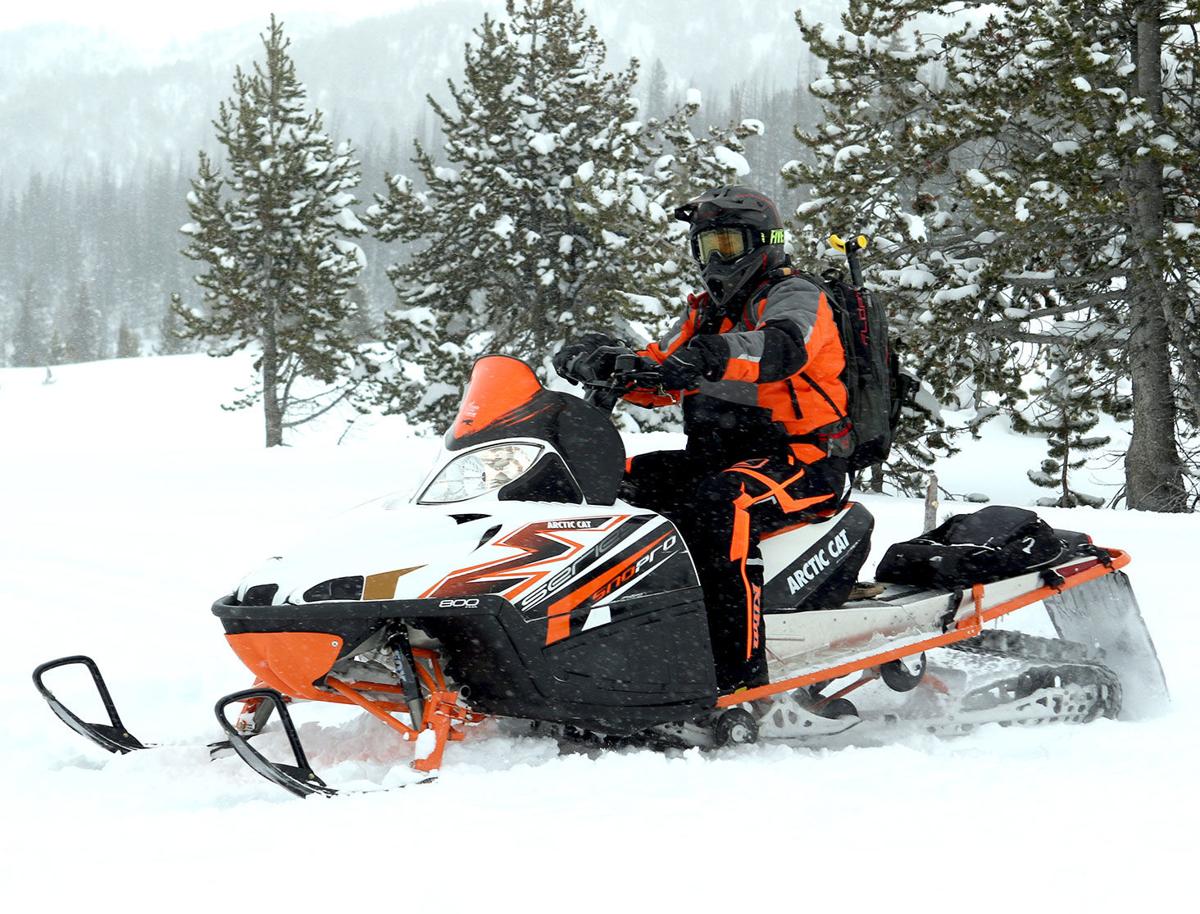 Greg Barsumian rides a snowmobile Jan. 11 on the Beartooth Highway during avalanche training. 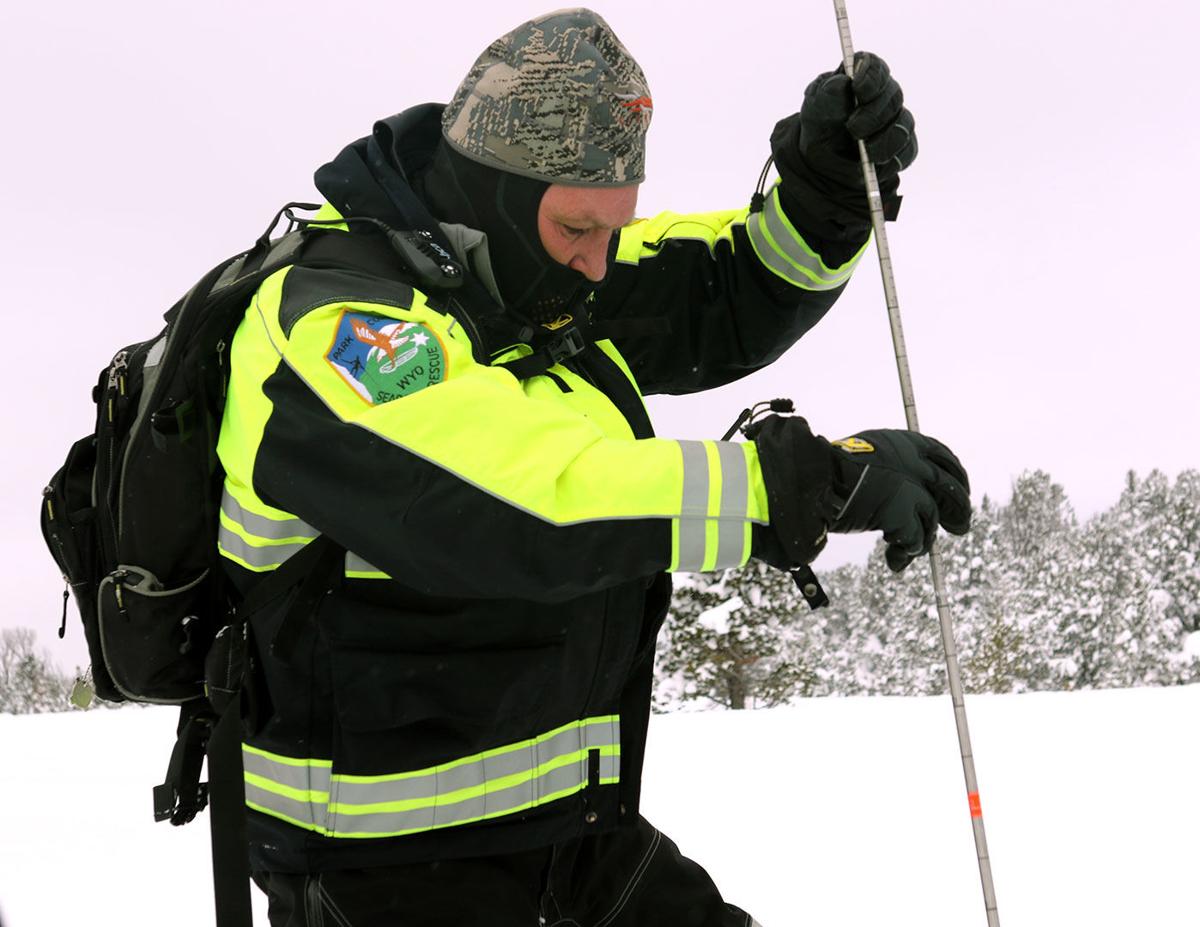 Scott Steward probes for a mock body during training.

Park County Sheriff Scott Steward, Bill Brown and Mike Paulson stand with others around the Park County Search and Rescue toboggan used for winter rescue efforts during an avalanche training clinic Jan. 11 in the Beartooths.

Greg Barsumian rides a snowmobile Jan. 11 on the Beartooth Highway during avalanche training.

Scott Steward probes for a mock body during training.

Powell resident Tim Metzler has seen the impact of an avalanche first hand.

Luckily, Metzler was able to rescue his friend who was buried in a slide on Togwotee Pass, about five feet under the snow when located. Many who become caught in an avalanche are not so lucky.

To prepare for events like these, the Cody Country Snowmobile Association hosted an Avalanche Training Clinic on the Beartooth Highway Jan. 10-11, funded by a grant from the Wyoming Recreation Trails Program.

“It’s got to be a habit if you want to play this game,” Metzler said.

In the past 20 years, the number of snowmobiler deaths from avalanches has skyrocketed. The most common cause of death in an avalanche is asphyxiation, but 25% of those killed met their demise before the slide even finished, perishing from trauma.

Although not nearly as intensive as a three-day Avalanche Level 1 course, the training was designed to give basic information on how to find a buried victim.

“You’re going to be well ahead of a lot of people,” Eric Knoff, an avalanche specialist with the Gallatin National Forest Avalanche Center told the group.

Seventy-two members of the general public and representatives from Park County Search and Rescue were on-hand for the event, a great improvement from the roughly 20 who showed up for the last seminar held about two years ago.

The Friday night before the field training, an overview seminar was held at Holiday Inn. Then on Saturday, participants took the roughly 15-mile trek up WYO 212 via snowmobile to the CCSA Safety Shelter.

Cold and blustery conditions would not stop those hungry for knowledge.

The group was split into three groups taught by Will Mook, Matt Schebaum, Bill Radecky and Knoff.

“You just see how many avalanche accidents and how many fatalities are so easily prevented ... with just some basic awareness and knowledge,” Schebaum said.

For Search and Rescue, avalanche rescues are more rare other evacuations due to the nature of the terrain and distance between Cody and a possible slide, although similar efforts have happened. In 2015 SAR helped airlift an ice climber struck by a falling rock on Carter Mountain.

SAR’s actions in avalanche events are typically in the form of victim transportation rather than an immediate dig-out. Yet members said it is still valuable to garner this piece of knowledge.

“You’ve got to be confident in your rescue techniques, if not you could be the one getting rescued,” said Park County Sheriff Scott Steward.

Search and Rescue is composed of 25-30 volunteers who are expected to respond to emergencies, 24 hours a day, 365 days a year.

“We rely on guys like this,” Steward said. “These are the riders. If we have a search up here, if we can get up here and we can get guys with groups of these guys that are so familiar with the terrain and mount a search it’s great.”

Within SAR are about five members who specialize in snow search efforts. One of these members is Dustin Rosencranse, who also owns Roger’s Sports Center and was at the training.

“It’s good to see all these guys trying to learn how to save me,” Rosencranse joked.

Most snowmobilers typically travel many miles of terrain over the course of a day in the backcountry. During their travels they are likely to encounter slopes with a variety of characteristics, exude some wind-loaded or steep trouble points ranging from 30-45 degrees, a staging ground where many avalanches arise. Recognizing this terrain can be the most effective way to prevent an avalanche.

Knoff said many snowmobilers are too focused on the pitch that is immediately above them, and ignore that an even steeper, less stable slope lies higher above that can become the site of a remote trigger.

The training also drilled participants on finding a victim with beacon and probe devices. Once a victim’s location is determined, rescue crews must dig from a side angle to effectively remove snow from a burial area. A straight-down approach wastes time, which reduces the chance of survival.

“That new technology of digging away is so critical to getting that snow ejected because we were building it higher and higher on the sides, and we need to get it out of there,” Metzler said.

Within minutes of a dig-out commencing, rescuers can undergo extreme fatigue because of the sheer quantity of snow they might be moving. Mook said an avalanche recovery can involve as much as a dump truck load of snow.

White smoke cascading from golden shovels, rescuers worked through the frigid temperatures; toasty breath quickly swallowed up by the crisp high-alpine air. Evoking perspiration and guttural grunts, the SAR members got to their target.

For the last workshop, participants and SAR members were given a large parcel of snow to find a target within.

An avalanche rescue is an inherently stressful event. How rescuers manage this stress and act on their knowledge in a timely manner can mean the difference between life and death. Ninety-two percent of those buried survive if rescued within 15 minutes, but that survival rate plummets to 37% if still unrecovered 35 minutes after the slide.

Even difficulty snapping a shovel together can cost precious minutes. That’s why attending classes and clinics like the one held Saturday are so important for building knowledge off repetition and practicing skills.

“Companion rescue is your No. 1 chance of survival,” Knoff said.

Metzler said he and two companions actually rode over the top of where his buried friend was.

“We didn’t have a clue until we started searching,” Metzler said. “The things that we learned today (at the training) for how we dig, everything in that situation is so much different.”

When they finally reached him, their companion was already unconscious from asphyxiation. It took more than 10 minutes to revive him and 45 minutes to fully dig him out.

“That’s why this stuff is so critical,” he said.

Even once a victim is recovered, speed is still very much of the essence.

“Hypothermia becomes very quickly, the biggest problem, even if they hit a tree or rock,” SAR member Aaron Billin said. “Even if they’re still alert you need to give them calories.”

Due to the logistics of a Search and Rescue mission, it can take hours for SAR members to reach an injured party and get them back to safety. Because of such, Billin said it is critical for a victim to receive warmth and calories to keep their body running, while staying horizontal in order to prevent further injury.

“Not going to be the most comfortable ride, but better than dying,” he said.

SAR often relies on Guardian Flight helicopters for high-mountain evacuations but during inclement weather use of the chopper isn’t always guaranteed.

In scenarios like these a long haul with the toboggan would be depended on. In addition to a fleet of standard snowmobiles, SAR also owns an eight-wheeled amphibious vehicle known as an Argo to perform operations in particularly inclement snow conditions.

People who own spot devices and or satellite communications devices with the capability for two-way texting, can directly contact the Park County Sheriff’s 911 Communications Center if needing a rescue, by sending a text message to help@parkcountysheriff.net.