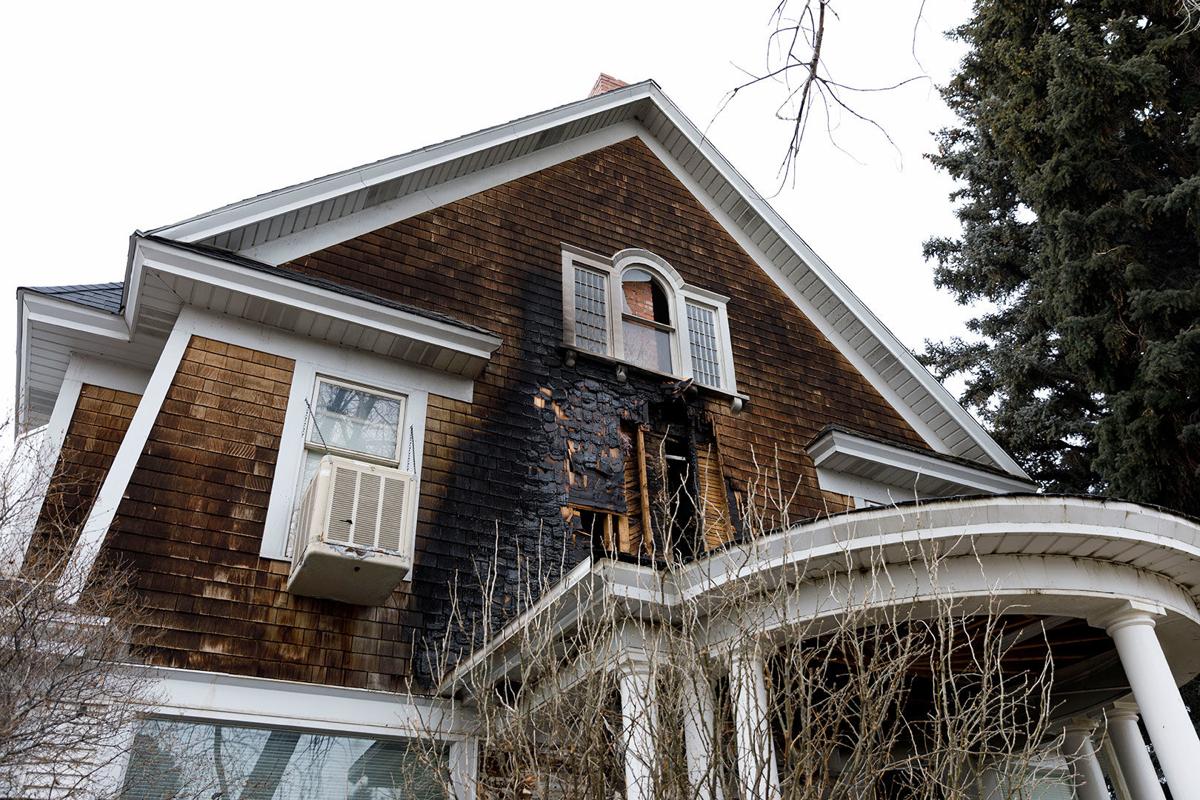 A structure fire Monday caused damage to a historic home at 1037 Rumsey Ave. 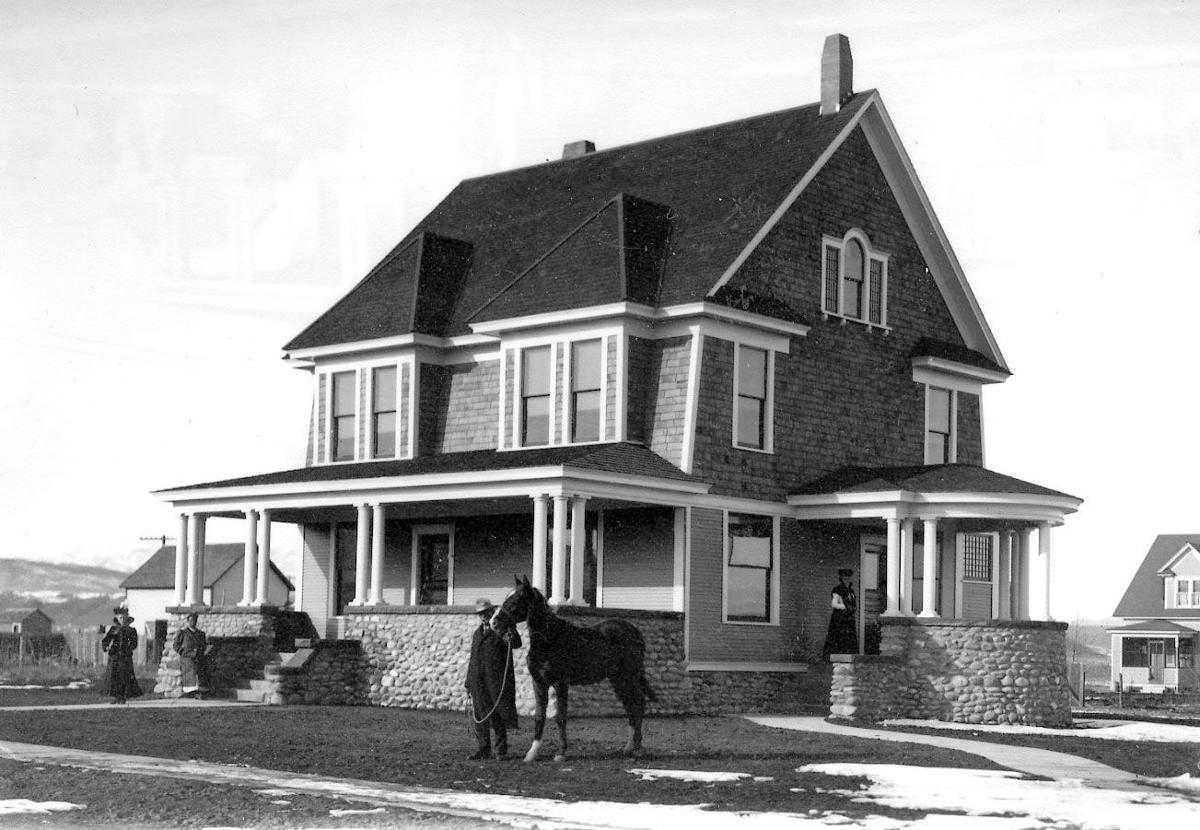 This glass plate negative of the house on Rumsey Avenue is circa 1910. The house was built in 1906 by Reuben C. Hargreaves (sometimes spelled Hargraves), pictured in the center holding a horse. (Park County Archives photo)

A structure fire Monday caused damage to a historic home at 1037 Rumsey Ave.

This glass plate negative of the house on Rumsey Avenue is circa 1910. The house was built in 1906 by Reuben C. Hargreaves (sometimes spelled Hargraves), pictured in the center holding a horse. (Park County Archives photo)

A house on Rumsey Avenue built in 1906 sustained damage when a chimney fire broke out Monday evening.

Cody firefighters responded to a call at 7:48 reporting a fire at 1037 Rumsey.

The blaze originated in the chimney, and firefighters contained damage to areas around the chimney on three levels, said Jerry Parker, Park County Fire District 2 administrator.

The 2 1/2 story house with a partial basement sits on about a half acre at 10th and Rumsey, one block north of Millstone Pizza. It is undergoing remodeling by contractors and was unoccupied at the time. Owners are Ronald and Carolyn Tebbetts of Carlsbad, Calf.

Fire marshal Sam Wilde was not available at press time. Sean Collier, city building inspector, said damage is mostly contained to walls with some floors affected. A central support beam will need to be replaced.

Although firefighters had to tear out interior and exterior walls to douse the fire, Collier said the historic house is salvageable.

Contractors were repairing a boiler with steam radiator, the main heat source. The fireplace, which is not original to the house, was used to burn scrap material, Collier said. Although only a small bed of coals remained when workers left, in some spots the chimney mortar was deteriorated and its clay liner had cracks.

According to past newspaper accounts, the residence could have met disaster by fire early on.

In September 1911, the Enterprise reported a gasoline stove at the Hargreaves’ residence nearly caused a blaze.

A fire apparently never materialized because the Enterprise on Dec. 30, 1911, reported if no fires occurred in Cody before Jan. 1, the city would have finished the year without having sounded one fire alarm inside city limits.

“Much of the credit for this is due to the stringent city ordinances requiring the covering of hay, the maintenance of ash pits and the forbidding of bonfires,” the Enterprise said. “On windy nights, extra watchmen have also been employed.”

Hargreaves was a ranchman and wool grower also described as a pioneer sheepman who liked to race horses.

The newspaper said Hargreaves had plans to take the horses to county fairs at Billings and Red Lodge. He also drove the pair to Shoshone where they were shipped to Douglas for entry in the state fair races.

That year Sabbath Day won four races Aug. 16- Oct. 11, the Enterprise announced. In Thermopolis, the pacer set a new track record to win a $100 purse. In all, the horses won $700 that season.

An elderly Hargreaves died in September 1926 at his Cody house after many months of illness and home confinement. At that time he owned an 800-acre ranch north of Cody on Cottonwood Creek.

Mrs. R.C. Hargreaves died at Torrington in 1937 at age 36, also due to prolonged failing health.

The same year R.C. Hargreaves died, Evans started Cody’s first jewelry store. The residence on Rumsey would have been a short walk to Evans Jewelry on Sheridan.

A jeweler and an optometrist in Cody’s early days, he was born in Alabama in 1888. He arrived in Cody at age 20 and worked as a watchmaker for Western Drug owner Ribu Schulz.

A few years later Evans left to play professional baseball in Texas, returning to Cody in 1917 when he bought the Western Drug jewelry department.

He also assisted local people with their eyesight.

“Mr. Evans is a graduate optometrist equipped with every modern facility and training to properly fit your eyes for glasses, if you need them, or help you if you don’t,” the Aug. 21, 1935, Enterprise said at the end of a brief story touting the jewelry store merchandise.

Evans died in 1966 as a California resident following a long illness.

Am I the only one wondering who the contractor is and if permission was given by the homeowners to burn scrap materials in the fireplace?