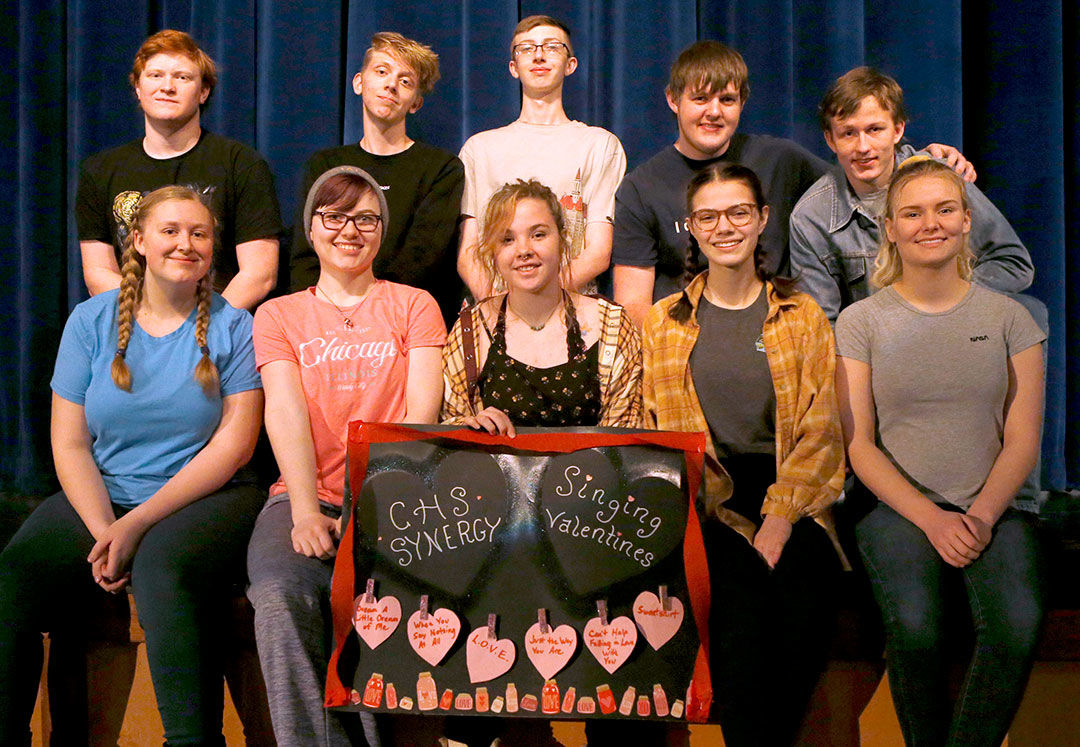 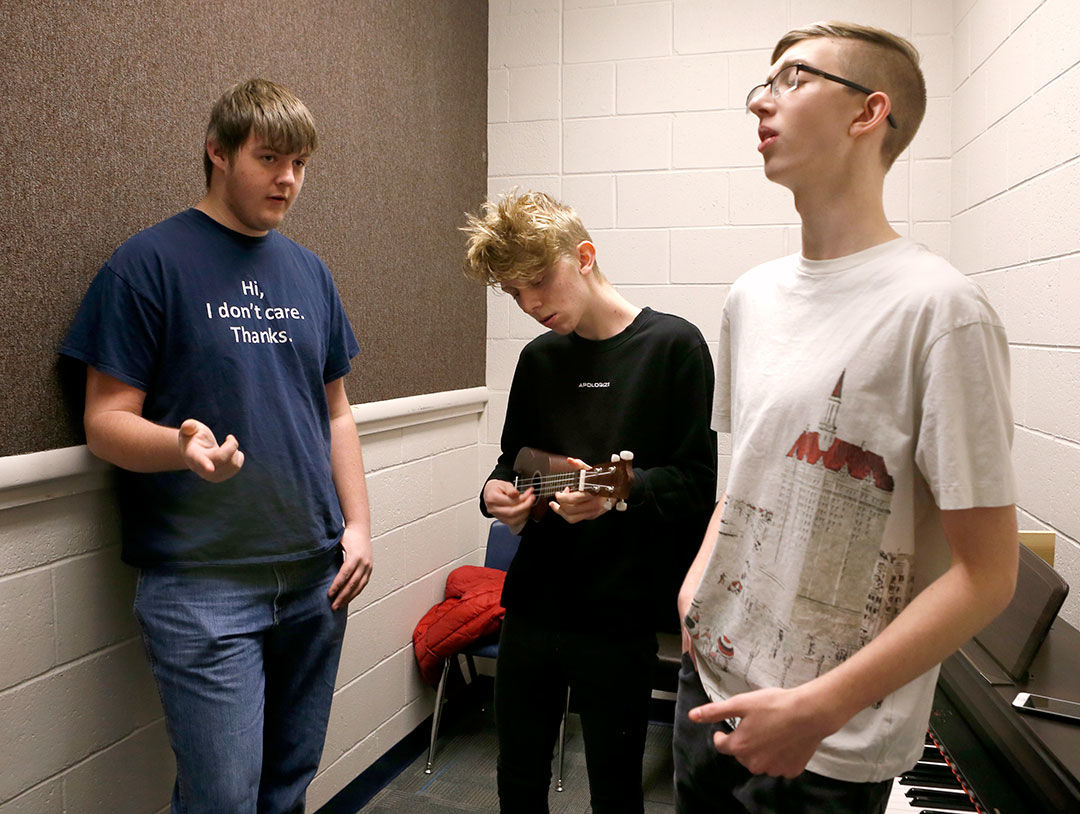 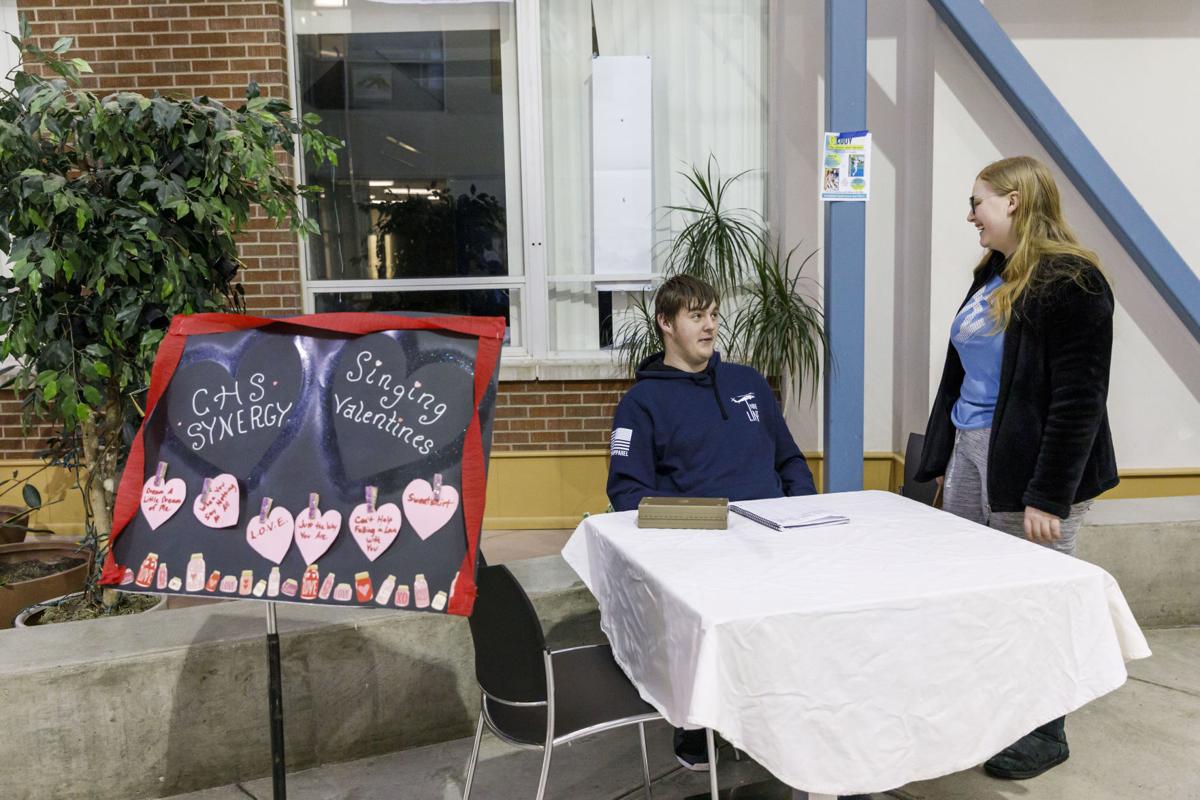 Andy Scott sells Synergy valentines with Emmalee Beardall in The Mall at Cody High School before school on Wednesday.

Andy Scott sells Synergy valentines with Emmalee Beardall in The Mall at Cody High School before school on Wednesday.

For many Valentine’s Day means chocolate, flowers or jewelry.

Every year at Cody High School, Valentine’s Day means singing valentines, and for the 10th year Synergy will deliver them for the holiday.

“It’s really fun to get involved with the student body,” junior Kateri McColl said. “We perform at pep rallies but otherwise the choir is kind of unknown among the school.”

A fundraiser for the group, it’s popular with both the singers and students who send them.

“They really like to do it,” choir director Larry Munari said of his students. “I think if I said, ‘We’re not doing singing valentines, I’d have a rebellion.”

Each year the choir students split into three groups and each pick two songs to sing. This year’s songs are “Dream a Little Dream,” “When You Say Nothing at All,” “L.O.V.E,” “Just the Way You Are,” “Can’t Help Falling in Love” and “Sweatshirt.”

“‘L.O.V.E.’ is a timeless classic,” senior Grant Pate said of why his group chose the song.

His group’s second choice is “Sweatshirt.”

“A lot of people buy them for their friends as a joke and ‘Sweatshirt’ is a little more lighthearted,” senior Andy Scott said.

Two weeks prior to Valentine’s Day, the Synergy students begin selling the valentines before school and at lunch.

When someone purchases a valentine they receive a card to write who it’s for, who it’s from and a personal message. They then select the song they want performed. While students are the main recipients, teachers have also been on the receiving end.

“We get some for teachers,” Pate said. “Last year we had 20 orders of ‘Single Ladies’ for Mr. (Cris) Williams.”

The singers said the songs are different from what they have been working on in class.

“It’s a nice change of pace and a little break from the jazz we’ve been singing,” Scott said. “I’m looking forward to walking into a room and watching someone perish from embarrassment.”

Those who’ve done this before say that’s one of their favorite parts.

“It’s fun embarrassing people in class,” senior Emmalee Beardall said. “Then there are some that get that flattered look.”

Each valentine lasts for 60 seconds.

“It doesn’t seem that long but when you’re on the hot seat 60 seconds is a long time,” Munari said.

As of Tuesday morning the group had sold 30 singing valentines, but Munari expected a rush of last minute purchases before Friday to up the total to closer to 60.

The students then makes a schedule and Munari lets the teachers know when they’ll be coming.

“When we walk in some (students) know it’s coming and some are shocked,” McColl said. “I’m really excited to go around and be able to sing with my group. Last year we were in Equestria so it’s fun to sing with them again.”

The singers even dress up for the occasion.

“It’s fun,” Beardall said. “We get to dress up in valentine colors and it’s a good fundraiser.”

And it’s a spectacle (with choreography included) CHS students look forward to every year.

“We’re not going to bust out a show with flips, but we’ll have some moves,” Pate said. “When we go in, if they won’t move to us we move to them. They can’t escape.”